WHEN the boys jumped from the forty-ton Rover to the ninety-ton Brothers they thought, and rightly, they were stepping up, and into something pretty big. But there's always a star above the hill, and this they realized when they came in one fine morning with a load of stone for Leake's wharf at the foot of George street, beside Taylor's and found the berth occupied by the "barque" Jessie L. Scarth.

The Jessie Scarth was nearly new. She had been built at Hamilton and she went across the ocean to London with squared timber, and then on to Odessa on the Black Sea for Russian wheat for Liverpool, and back to Canada after two years wanderings. She was big enough to swallow the Brothers, Williams boys and all, for an appetizer; she could carry eight times the Brothers' load.

Young Johnny Williams has lived to command steel steamers which could stow ten times the cargo of the Jessie Scarth, and then have room for eight loads of the Brothers, and which could berth five Jessie Scarths on deck with nothing hanging over at either end. But this morning in the 1870's when she towered above the Brothers like the Royal York above a hot-dog stand, a lakefaring career. She had three masts, and on the foremast she had great square sails, spread by spars which crossed the mast. Johnny learned later to call them yards, but was so impressed at this time he forgot their names, if he had ever heard them—and he had no idea of the little batwings or moonrakers that fluttered their triangular pinions above the highest. Even big brother Joe was staggered.

"How'd you like to sail in her, Johnny?" he almost whispered.

"I don't know how I'd manage crawling out on those crossbooms but I'd try," said Johnny.

"I'll bet you'd get on to it," said Joe loyally. Johnny was always a good climber. "I'll bet you would go round the world in her."

The Jessie Scarth was sailed by a young captain known as "Little Sam," active, aggressive, proud of his new command and his new wife. The barquentine was painted like the Queen of Sheba, and within she had what that lady never attempted, for her bulwarks were adorned with scenery in panels. Over the deck a large awning was stretched fore-and-aft. The luxurious lady of the lake was at leisure, laid up, until she got a charter really worth her while. Her crew had been paid off. The captain and his wife remained on board as shipkeepers. The cabin was very comfortable, under the awning, but they got their meals at the hotel across the old Esplanade, to save the expense of retaining a cook, or the trouble of cooking.

"All this doesn't get our cargo on to the dock, " said the practical Johnny. "They can't expect us to unload it on to this big vessel and then carry it across to the wharf."

The boys appealed to Mr. Leake, to whose wharf they were consigned.

"That's right, " said Mr. Leake, "the Scarth will have to drop out and make room for you, and I'll tell the captain so. "

"I've no men, " objected the Scarth's captain, "and I'm in my shore clothes."

"We'll help you," chorused the Williams boys eagerly. Johnny, Tommy and Joe were alike keen to set foot on such a sea-queen's decks. The captain lighted another cigar and said, "Turn to, then, and I'll see how good sailors you are. "

It was an important job, running lines from spile to spile and heaving such a large craft out to temporary moorings, but the boys, proud of their own advance in seamanship, listened carefully to "Little Sam's" barked orders and made no mistake. After they got the Brothers into the vacant berth they helped the captain shift the Scarth into proper position and got his lines put for him exactly as they were before, even to the putting on of the parcelling to keep them from chafing on the edge of the rail where they came over the side, and where they touched the dock.

Their cheerful zeal impressed the captain, whose immaculate shore clothes had not been wrinkled in the whole operation, and he said, as the last of the parcelling was going on, "We get our meals at the hotel. Come up at suppertime and we'll have a little refreshment."

The boys went back to complete the piling of their cargo, and get their own vessel ready for sailing. At suppertime, hot, tired and dusty with a hard day's work, they diffidently entered the hotel bar. Their father had given them some wholesome advice about barrooms, and they heeded it, but they felt that even he would approve of their entertainment by the mighty captain of a big vessel on such an occasion.

The room was crowded with thirsty souls knocking off for their day's work. The little captain of the largest laker sat in state in a cane-bottomed chair, with a spitoon placed specially for so distinguished a guest. Around his head was the azure halo of a fresh cigar. His impeccable shore clothes were unmarred even by its fine ash.

The halo of cigar smoke increased.

"He don't want no men," chorused dockwallopers from the bar, and a snicker went round.

The words cut through the tobacco smoke, and the red of the captain's healthy sunburn turned to a sickly mauve. Right - about - face - quick -march went the Williams boys to their homely hooker, past the awninged Jessie Scarth. And, boylike, they thought no more about the whole thing.

Thirty years later young Johnny Williams, then master of the Sir C. T. Van Straubenzee, of the Jessie Scarth's size—and making money at it—saw a two-masted schooner of half her burthen in the same slip where the Jessie Scarth once lay. No awnings covered her bare deck, and her sides screamed aloud for paint long denied. She had a gaunt air of starvation about her. But, like the Scarth of long before, she was in the same place for the same reason. She was waiting for a charter, and she had been for weeks. Unlike the Jessie Scarth, she would take anything she could get, but could get nothing. The Jessie Scarth had capsized in Lake Huron twenty years before and gone the way of all wrecks.

"Can't seem to get any work anywhere," complained a little old man in faded clothes, sitting on the gaunt schooner's rail. "Here I got my last red cent in this hooker, and she ain't earned wharfage bills even all season."

It was Little Sam, and his remarks were addressed to the firmament. But Capt. John Williams caught them. He was on his way to a shipping office, to see about the Straubenzee's next load.

"Sorry, Capt. Williams, " said the broker, "but all we've got to-day is a four hundred ton charter. I know it's not much more than half a load for the Straubenzee, but if you'll take it we might have something better before you finished loading, or perhaps get you a freight outwards, to make up for the shortage."

"Mr. So-and-so, " said Capt. Williams, "there's a vessel at the foot of the street that's been idle all summer, and she'd just fit that load nicely. You give Little Sam the chance, and don't tell him I said so."

THE JESSIE SCARTH—whose name is preserved in Scarth Road and Binscarth Road, Rosedale—was owned by the late W. B. Scarth, of Toronto, and made voyages across the Atlantic and the Black Sea. She was depicted as above by the late C. I. Gibbons in one of his drawings as a topsail schooner. In another she is shown as a barquentine. 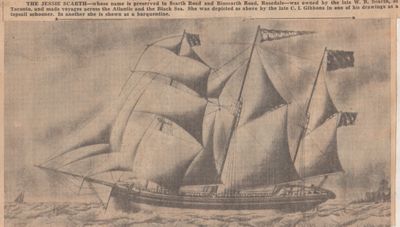