WHILE working diligently with Tom and Joe in the scow Brothers, which might have been named after the boys themselves, but was not. Johnny Williams never missed the chance to extend his experience of ports and places and seamanship as practised in larger vessels. So, in the fall of 1875, when chill November winds would hint to most boys it was time to cease sailing till next spring, he shipped with Capt. Maurice Fitzgerald in the—for him—large schooner Duncan City.

"Fitzy, " as he was nicknamed, was one of the outstanding schooner captains of his time. We have only known him as the white-bearded patriarch of Oakville, who died nine years ago, seeming so old to be the father of Jim Fitzgerald, The Telegram's sporting editor, who always seems so young. Yet Jim himself was out of his teens when he got leave of absence to serve in the Great War, and he was certainly of voting age when he came back from France a major. Capt. Maurice Fitzgerald was a cultured mariner who had no difficulty in falling back on the conjugation of Latin verbs and the declensions of Latin nouns when normal vocabularies were exhausted. In 1875 he had only been sailing fourteen years, but had risen to command and knew the lakes from Chicago to Quebec in all their moods and tenses.

Johnny Williams was proud to be shipped by "Fitzy" for a hard trip in the fall, even as a boy, for only good men stood a chance for such employment. "Threefinger Jack" Andrew of Oakville, late captain of the schooner Baltic, was proud, too, to go as mate. He had chopped off two fingers cutting kindling as a boy. The thumb and remaining fingers left him a grip like steel chainhooks. "Fitzy" always picked a good crew, and, Thompson Smith, his owner, used to say he would rather have Maurice Fitzgerald in charge of his vessel, sound or sick, rather than any other captain no matter how high he rated.

The Duncan City was a trim two-masted schooner of American build, intended for the lumber trade of Lake Michigan and Lake Huron, and named after a little sawdust pile which is or was in the heart of the old Michigan lumbering district, near Cheboygan. Smith and Post had interests there, and that was how Thompson Smith, the Oakville magnate, got the Duncan City. She traded most summers on the Upper Lakes, with Chicago or Detroit as the goal for her cargoes, and in the fall would come down to Lake Ontario for perhaps a trip or two before laying up in the Sixteen Mile Creek at Oakville. That was where Maurice Fitzgerald had his anchors down, although he often took his wife and family away for a season's sailing. Maurice Fitzgerald had been to Chicago with the Duncan City at the time of the great Chicago Fire, which was as great a claim to fame in 1875 as having been in Rotterdam last month would be to-day.

The Duncan City was smartly kept, painted white, with green trim. Capt. Frank Jackman once said that she was the first coal-carrier into Toronto, bringing coal to Patrick Burns at the Queen's Wharf, a cargo of such novelty—at least in so great bulk—that it was shovelled into bags and boxes for unloading, and stored in a temporary shelter of boards, like so much grain. But whether she carried grimy coal or sweet smelling lumber, the Duncan City was always as smart as paint and the scrub brush could make her when "Fitzy" was in command.

They loaded lumber this time at the old Northern docks on Toronto's western waterfront, and had a good run down to Oswego; threw the lumber out and dropped across to the trestle and loaded coal for the return trip. They came out in company with two other schooners, the Olive Branch of Oswego, small, smart, white and clipper-bowed, carrying three hundred tons, and the Fearless, a Canadian, bluff-bowed, straight stemmed and full. She was painted white, with a lead-colored bottom. Wm. Ferguson, who was a sailmaker as well as a captain, sailed her. All were bound for Toronto.

The three made a good run up the lake, and the early dusk of Saturday evening, Nov. 13th found them still in company, off Darlington, wing-out before the light east breeze. That is, they had their sails set wing-and-wing, mainsails to starboard, fore sails to port, an arrangement only possible when the wind is right over the stern.

Just then the supper bell rang.

After the fifteen-minute supper Maurice Fitzgerald tapped the barometer once, went on deck, looked around the darkened horizon, and rumbled, "Let that foresail come over!" He may have made a flick of his wrist to the man at the wheel, but that lad knew what to do anyway. He brought the Duncan City up a mite, so that when the boom-pennant was eased the foresail swung in and hung breathless in the lee of the mainsail.

"While it's becalmed, you'd better settle away your throat and peak halliards and reef it." Fitzy remarked, as to himself. Three-fingered Jack was a smart mate, and he had the reef-tackles talking in short order. The loose sail, with little snowflakes clinging to the creases, was reduced to double reefs and hoisted again in short order.

"Now haul down your jibs and reef the mainsail," Fitzy went on-rumbling. To the man at the wheel, "Bring her up—by the wind."

The Duncan City went nid-nid-nodding out into the snowfilled lake while the two other white schooners, holding their course for Toronto, vanished into the gloom between her and the land like sheeted ghosts hurrying home at cockcrow. They hoped to get under the lee of Toronto Point, forty miles away, before the snowstorm got too bad to pick up the land. "Fitzy" knew they couldn't.

It began to snow hard.

"I told you it would be clean enough," said Capt. Fitzgerald complacently.

It was pitch dark and blowing hard by the time the mainsail of the Duncan City was reefed and set again. Her staysail was hoisted, and hauled a-weather, and her wheel lashed hard down. She rose and fell on the increasing seas like a gull waiting for daylight. The snow filled the sails and the motion of the vessel emptied them in cascades of whiteness on the whitened deck. But with only enough canvas set to steady her the Duncan City, hove to and moving through the water at very slow speed, made easy weather of a wild night. The wind shifted from east to south and south to west. When Sunday morning broke it was a bright, clear day with a hard west wind. The Duncan City was out of sight of land. They put her by the wind on the other tack and she soon raised Flamboro Head away back of Hamilton, and then the tall lighthouse on Toronto Point. She went ramping homeward, rounded the lighthouse, and sailed in through the old Western Gap without a ropeyarn parted.

But the Fearless and the Olive Branch were wrecks on the beach.

As will be told next. 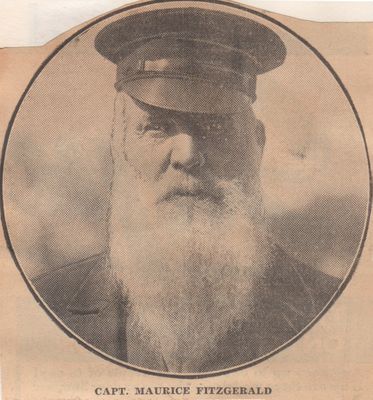