For example, where could you get a prettier name than Fleetwing?

Yet see what happened.

The schooner yacht Fleetwing was one of a trio which took part in the midwinter race across the Atlantic from New York to decide James Gordon Bennett's $10,000 bet. They were in the English Channel on Christmas Day, 1866. The others came through without mishap - Dauntless was the winner - but Fleetwing had six men washed from her cockpit and drowned in mid-ocean.

Capt. Orin Quick, son of Capt. Wm. Quick, of Brighton, and master of the schooners Meteor and Fearless at various times, went across Lake Ontario to Wilson and set up a shipyard there, as his father had done before him at Presqu'isle, on the Canadian side. The pride of his Wilson yard was a schooner which he named the Fleetwing, before the ocean race tragedy. She was built during the American war, when lake freights were phenomenal, and launched in 1863. The Fleetwing was larger than any of the vessels built by the Quicks at Presqu'isle, and Orin sometimes received $1,800 for a single freight of hers, from the Upper Lakes to Kingston. He was exceedingly proud of her, and sailed her himself, in preference to ship-building. It was probably during these profitable Upper Lake trips that she was changed to Canadian register at Windsor for to her dying day the Fleetwing bore, "of Windsor" on her stern, although she was owned at the lower end of Lake Ontario.

The legend was probably an indication of a transfer to Canadian registry at this Western Ontario port of entry, for the Fleetwing, although Canadian-owned, was what was known as an "American bottom."

Modern geographers may search in vain for the lake port of Wilson, but the village is still there, twelve miles east of Niagara, on the American side. Seventy years ago it was a thriving harbor, building many schooners, and even forty years ago there was a regular trade out of Toronto with lumber to Wilson, the nearest American port with the exception of Youngstown. Many a load of lumber Capt. Pat McSherry carried thither from the old Northern docks in the little schooner, Marcia A. Hall.

The Fleetwing was a schooner of from 127 to 180 tons register her tonnage varying according to the time and place of measurement. They were much given to that in the old days. She was 108 feet on deck, 24 feet beam and 7 feet 9 inches deep in the hold and capable of carrying a maximum load of 400 tons of coal. D. McNutt was given as her nominal builder in Thomas' Register of 1864, where she rated class A and of insurable value of $7,700; indicating a very fine vessel. McNutt may have been Capt. Quick's partner or foreman.

Toronto knew the Fleetwing well. In 1891 and 1892 she and the Garibaldi, each black topped and green bottomed, and sailed by two cousins, Shaws from Cat Hollow way, carried cribstone for the wooden piers which were being built for the Eastern Gap. The wooden cribs have disappeared, and the bones of both vessels have long been growing weeds.

This was a reminder of the Fleetwing's earlier and first tragedy.

While the schooner was in her first flush of youth Capt Quick took his wife and his young son, Harry, aged five, for a trip across the lake from Wilson to his home in Brighton. It was his intention to bring back with him his younger sister, Amanda, to live with them in Wilson. Little Amanda became Mrs. John Covell, an her home is now in Toronto at 92 Hammersmith avenue, as has already been told.

When they were in sight of Cobourg lighthouse, 24 miles from Brighton, it fell calm. Capt Quick, always desirous of improving his time and the Fleetwing, went down into the hold to do some carpentry. Time passed, and the mate called down the open hatch, "I think it's making up for a squall." Capt. Quick put by his tools and climbed up the ladder. The lake was like glass, there was no wind, everything was very still. He could hear the cook in the gallery sharpening his knife to cut the meat for dinner.

"Better safe than sorry; get the duds off her!" called Capt. Quick, not liking the livid look the sky was taking on.

While they were lowering the mainsail there was a sharp patter of rain and Mrs. Quick and Harry ran into the cabin. Then a blast as of a tornado struck the motionless schooner. Had she had way on she might have kept her feet but she went over under the fist of the squall as though the side had slipped out of her. Capt. Quick caught a glimpse of his wife at the cabin door. Next moment the schooner was on her side and filling with water. He tried to reach the cabin but the door was far below the surface. He crawled up the side of the cabin to the Fleetwing's weather rail, and hung there with the rest of the crew, four men.

They were so close to the little old lighthouse that men on a tug in Cobourg could see the figures scrambling and climbing for safety. The Fleetwing floated, for she was new and there was no cargo in her, and the tug pounded out, her safety-valves popping. In a few minutes she had the survivors safe aboard, and got a line on the schooner. She towed her to shoal water and righted her, and gangs of men pumped the Fleetwing out.

Mrs. Quick's body was found in one of the lower berths in the cabin. It had been washed there by the influx of water. The body of the cook, a big man named Cluff, was missing. So was that of five-year-old Harry Quick. It was washed up at Salmon Point, or Wicked Point, as the place is well named, thirty or forty miles to the eastward, clad in the blue jersey and blue coat with brass buttons which the little sailor laddie had been so proud to wear because mother had made them. Cluff's body came ashore near Whitby, forty miles to the westward, still grasping the butcher knife with which he had been preparing the meal which no one ate.

The Fleetwing was towed back to Wilson, where she had been built; and her masts were shortened by ten feet to prevent a repetition of the tragedy. But she really went over because she had no headway, not because she was too high-hatted. The shortening of her spars, and the greatest care in sailing her did not free the Fleetwing from her doom of being a death ship.

As you shall hear next week.

Model of the barquentine Jessie Bell, made by Capt. John Covell, of Brighton, and treasured by his surviving spouse. The Fleetwing was of about half the size of this vessel and had only two masts and no square sails. 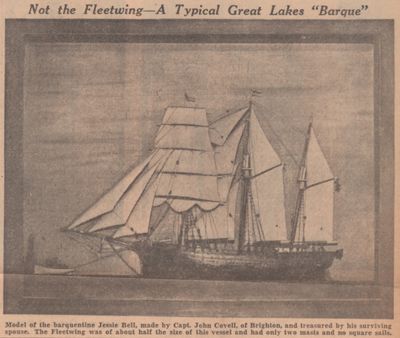