IN THE 1840’s and 1850’s an influx of Finnish settlers for the new American west, which then began at Chicago. It was like the wave of excellent Finnish maids which inundated Toronto 80 years later. Among the newcomers in America were many mariners, and they naturally preferred to plough furrows on the Great Lakes rather than on the prairies. They were soon sailing schooners as captains and mates; very popular with owners, because they were thrifty and efficient, but not so popular with crews and competitors.

Bucko mates and brawny skippers who found themselves beaten, passage after passage, by these enterprising foreigners, fell back on the stories, popular the world over, that the Finns were warlocks, and bought and sold winds in traffic with the devil. One lake legend hailing from Oswego was of a Finnish skipper

Who made phenomenal passages by means of a magic rope, in which many knots were tied. When calmed, instead of whistling for a breeze, or throwing a coin overboard, or sticking a knife in the mast – all of which were “regular” practices, often employed by the lake tars—this worthy used to untie a knot or two. When

it came on to blow he would tie the knots back in his rope instead of stopping too reef. But the devil must have is due, and this skipper was finally lost with all hands when his wife - like all Finnish ladies, a very tidy soul - taken along for a holiday, exercised her ingenuity on the knots and untied them all when the old man was not looking.

Sheer nonsense, of course, but solemnly believed by half the lakes men and utterly laughed at by the other half.

But Alexander Muir, king of Port Dalhousie, ere he died, whose early adventures we have been following these last few weeks, must have had a luckier cord than the mythical Finn. He left home - his Ayrshire farm home - for sea in 1821, with no better outfit than his mother’s paisley shawl. He died at Port Dalhousie in 1909, head of an enterprise which had its own timber limits, shipyards, sail lofts, block and spar shops, steamers and schooners, horses for towing through the canal and a farm to feed them; which had sent its own ships overseas from Port Dalhousie, freighted with its own products, and which had established the oldest drydock in Canada, giving continuous service —Muir Brothers, still operating. Four brothers were partners with Alexander in his enterprise, and much of its success must naturally be attributed to them. Much, too, belongs to Alexander’s own forcefulness. But even so, he seems to have had a lucky string to his bow as well.

Following the unemotional memoir Alexander himself compiled in 1890, after passing the allotted three score years and ten, one finds this paragraph:

“February 12, 1845, I was married to Jane Lang at Kingston. I drove up from Chateauguay with a horse and cutter and when I arrived at Kingston I found the snow three feet deep. May 14th, 1845, Mrs. Muir arrived at Port Dalhousie. She moved into her own house and has lived there ever since.”

This was the little house young Alexander, rising from mate to master of Calvin Cook and Counter’s timber droghers (at $40 a month, mind ye) had built on the lot he had purchased in Port Dalhousie for $60 four years before -his first investment in Canada’s future - when he became convinced that Port Dalhousie, at the Lake Ontario end of the Welland Canal, would always be a good location for a sailorman.

Was Jane Lang, of Kingston, the lucky string to Alexander’s bow, the lucky thread in his life?

This is what happened immediately after the cautious young Scot’s venture into matrimony:

“On this vessel we freighted oak timber from Port Dalhousie to Garden Island for nearly three years. This vessel carried topsails and topgallantsails and was brig rigged. She carried a cargo of about 17 or 18,000 cubic feet.

“We made a trip a week for seven weeks in succession from Garden Island to the Port, and had no tugs to assist us. We had a crew of twelve and three horses to load our cargoes. We discharged our cargoes at the Island seven Fridays in succession, and arrived at the Port the following Mondays. For those seven trips the wind never failed to blow north every Friday to go up, and blow southwest every Monday to go down. It took a day and a half to fill the hold of the vessel, and half a day to put the deck load on. My wages were $80 per month, and one season the owners made me a present of $100.”

To the landlubber the marvel of such luck - apart from the $100 bonus and the doubled pay - may not be apparent. But to the sailor, especially the lake sailor, the Liverpool episode smacks of the miraculous. Up to the time they vanished completely, one trip a week was a good average work for the coal schooners plying between Toronto and Oswego, a distance somewhat shorter than these Garden Island voyages. With so many calms and head winds to, conquer, and loading or unloading delays, the Liverpool’s was truly remarkable work, although the sailing distance could be covered in 18 hours.

There seemed magic in it, that the wind should blow north every Friday, which was the only direction for it to be “fair” for the brig-rigged Liverpool for Port Dalhousie, and southwest every Monday, making it fair for her return. The rig of the Liverpool was three square sails on each mast, with some jibs forward, and a fore-and-aft mainsail in addition to the square one; good for long, straight passages at sea, but most awkward for shifting winds and beating about in narrow waters.

Very few vessels were thus rigged, as true brigs, for the lakes. The last was the Robert Burns, lost in 1869. Almost all the so-called “brigs” on the lakes were brigantines, with the mainmast rigged like a schooner’s, for better windward work. Some were not even brigantines, but schooners with square topsails forward; and some, like the Brig Rover, so christened, had no more claim to the square rig than the occasional square topsail, set flying for a fair wind, on a couple of pike-poles.

The Liverpool did not retain her brig rig long. Such luck was too good to last. She was first changed to a brigantine, and given a fore-aft mainmast. Then she was changed to a three-masted schooner. The last record I have of her is as such.

Records of Port Whitby harbor tolls shows the Liverpool, as a brigantine, using that harbor in 1852. She is so described in Thomas’ Marine Register, which gives her builder as Stephen Hubbell, at Garden Island, 1845, her owners as Calvin and Breck, her registered tonnage as 324, and her description as “flat,” which was the characteristic of the timber droghers. They had to be built straight and rather square, for the stowage of their cargoes. Sharp and round vessels were poor timber carriers. In a list of vessels on the lakes published in 1856 her tonnage is given as only 204, and she is recorded as a three-masted schooner, the second change in her rig having been completed by that date.

She was the largest vessel Alexander Muir had yet commanded, and was, indeed, very large for her time on Lake Ontario. It is doubtful if she could go through the Welland Canal when she first began sailing, although it was before long enlarged to accommodate vessels of greater burthen. Her dimensions were similar to those of the Ayr, the first, of a large fleet of “A” vessels which Alexander Muir and his brethren began building ten years later.

At any rate, Alexander Muir’s luck began with the Liverpool.

And with Jane Lang.

IN THE TIME OF SQUARE TOPSAILS—The vessel to the left is an old-style brig, similar to the Liverpool, as she was first rigged. On the right is a topsail schooner like the Britannia, mentioned by Alexander Muir as being a sharp, able, standing-keel craft, capable of beating up Lake Ontario against half a gale. 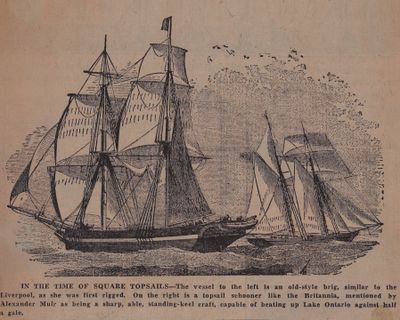