THAT old chiseller L. Ontario, after wrecking the Caledonia, graved his mark on her bones with her own chain cable as indelibly as ever cow-hand branded a steer.

You've heard of the constant drop of water wearing away stone, but you would be still more surprised at the evidences of water-wear in the wreck of the Caledonia recovered at Oshawa this week.

Her keelson was a stick of hard white oak timber eight inches square, flanked by sister keelsons each five inches wide and eight inches deep; all bolted through the floor timbers to the keel with three-quarter inch iron bolts.

Across the keelson of the wreck lay for fifty-four years a tangled mass of stud-link cable. The sunken wreckage was all this time subjected to the swaying motion of multitudinous lake waves, break, break, breaking over it. The cable was subject to the same oscillation, but in a less degree on account of its greater specific gravity.

Would you believe it? The rhythmic chafing of the seas of half a century has worked the pattern of the stud-links into the solid white oak—still sound and tool-defying— as sharply and accurately as could any carpenter's gouge or blacksmith's iron.

Each iron bolt has also been acting as a round file for half a century, and although none of them is more than an inch thick they have enlarged their original holes in the oak to as much as four inches wide.

The keel, once, seemingly, seven inches square, has been rubbed and scrubbed until it is an almost unmeasurable series of knobs and hollows. The bolt-heads protected the wood where they protruded.

Apparently the whole mass of wreckage has been turned over and over by big billows. This would explain small stones and a piece of coal being so firmly embedded in the top of the broken stem that they cannot be drawn out with forceps. The fragment of coal indicates the Caledonia's cargo when she was lost.

The garboard strake, next the keel, and a few fragments of other planking remaining, show that the Caledonia was not a large schooner. She had two-inch planking, and her frames appear to have been four inches wide, often doubled, and five inches deep. The remnants of them are so worn as to make measurements non-positive.

The wreckage recovered extends from the fore side of the stem to two feet beyond the step of the foremast. The mortice for this shows a foremast fourteen inches in diameter, stepped some eighteen feet abaft the stem. These measurements would involve an overall length for the schooner of about 90 feet, which corresponds with her registered tonnage, given as 128 in a list of lake vessels compiled in 1856.

GORDON CONANT'S spectacular recovery of the anchors, chains, pump, hawsepipe, stem, keel, keelson and floor timbers of the old schooner Caledonia, sunk east of Oshawa half a century ago, recalls the sailing vessels which have borne this name on the lakes.

The first was a little fat brig built for the Northwest Fur Company, probably at Moy House opposite Detroit, when the century was very young. One reason for supposing her to be built at Moy is that the Hon. Angus Mackintosh ruled the roost there for the company, and he was as Caledonian as cauld parritch and hot mountain dew can mak' a mon. His mother led the clan for Prince Charlie in the Fortyfive. The very name Caledonia is one he would pick.

This Caledonia was a motherly little tub, but she served the fur traders and her country well, and carried some of Brock's troops for the capture of Detroit, and also took the volunteers to Mackinac, which "Gibraltar of the North" they neatly captured on July 17th, 1812, before the Americans there knew, the war was on.

She was a member of the Provincial Marine, and came back to Fort Erie, after Detroit was taken, in company with the brig Adams, an American prize captured there, with a cargo of furs valued at $200,000. But alas, the annoying Americans cut out both the Adams and the Caledonia from their Fort Erie moorings. The Adams was burned in trying to take her across to Black Bock, but they got away with the Caledonia and used her against us for the rest of the war, arming her with two long 24-pounders and a 32-pound cannonade; big guns for the time and place.

She was their third brig in the Battle of Put-in-Bay, and so slow the others had to back their topsails to keep from running her down, and she took part in their expedition which failed to recapture Mackinac from us. She was not put to the torch when the British burned Buffalo and Black Bock towards the end of the war apparently, for she had been wrecked at Buffalo before the blow fell. But she was not so badly damaged that she could not be used, for she was sold by the U. S. Government and refitted as a trader in 1815. She then bore the name General Wayne, after "Mad Anthony" Wayne, who built Fort Defiance. They show you, in Erie, Pa., the sugar kettle in which his body was boiled so that his bones might be sent home to his friends from the wilderness where he died.

Next Caledonia on record is the one Mr. Conant has salvaged, built at Port Credit in 1842. How she got her name is unknown, but the Scotch were going strong at Port Credit at this time, with the Highland Chief and the Credit Chief, launched there in the same decade.

The very next year there was another Caledonia launched at Saugeen, on Lake Huron, or Southampton as it was afterwards called. This Lake Huron Caledonia was smaller than the Lake Ontario one. Popularity of her name is easily understood when it is remembered that Saugeen is in Bruce County, where the townships are Arran and Elderslie, Kinloss and Culross, Carrick, Greenock and so forth. The whole county is paved with Scotch names.

The Saugeen Caledonia was sold to Racine, Wis., and sailed under the American flag for a long, long time. She is said to have made two voyages across the Atlantic with cargoes of dried fish during the American War, or shortly afterwards. She looked small and light for such a task. She was in commission up to 1901, when she was dismantled at Racine. In her sixty-year life she never got ashore or had a serious mishap.

Then there was another Caledonia, built here on Lake Ontario at Port Union in 1861. She measured 95 tons and was owned by Halliwell and Henderson, Toronto.

In the same year, 1861, another Caledonia, of 61 tons, was built at Southampton by Capt. Hackett for G. McAulay, of that port.

Mr. Conant's hobby of collecting relics of the brave old white wings and wooden walls is a pleasant one, and Oshawa seems a good centre in which to indulge it. It was a great grain shipping port in the early days, although it never had a harbor until the sailing vessels had all departed. In their time they loaded at a pier, and had to scurry out for Toronto or Port Hope if the wind came in fresh from the eastward or westward and brought with it much sea.

Another anchor for Mr. Conant to cut his teeth on may be that of the Magdala, which was wrecked west of Oshawa some time after the Caledonia. She was a fine clipper-bowed schooner, built in the Gulf of St. Lawrence and brought up here seventy years ago.

Expert calculation of the dimensions of the big dredge anchor landed by the boys of the Oshawa Yacht Club last year places its weight at 4,060 lbs. Over two tons! Much too large for a schooner anchor, as was pointed out at the time. The big mudhook was supposedly used to hold contractor's plant while sand was being pumped in for a factory site for General Motors, and left in the lake when the job was done.

Mr. E. J. Guy, of the well-known Oshawa family, after which Guy, Point was named, remembers the, wreck of the Caledonia quite well, and places the year as 1881 and the month October rather than April. His recollection of the snow squall in which she struck is that it was a "squaw winter," or first flurry of snow, preceding Indian summer.

CAN ANYONE IDENTIFY THIS OLD TIMER AT MCGREGOR HARBOR?

Sir,—First of all, I want to tell you how very much we enjoy your "Schooner Days" in the Evening Telegram. They have tended, too, to make us "schooner-minded." Your article CLXXXIII (April 13, 1935), is of especial interest where you mentioned the schooner "Annie Foster," which was lost off Half Moon Island in 1882, after having left Barrow Bay for Hay Island. I cannot find Half Moon Island on any of the maps I have, and as we know of only one island, Barrier (and more commonly called Rabbit Island), between Barrow Bay and Hay Island, I have been wondering if that could be Half Moon.

We have camped at Cape Croker for the first three weeks in September each year, since 1932, and are here again this year. It is an Indian reservation, and a most interesting country to us.

Since reading your articles CLXXXIII and CLXXXVI, in which the latter deals with the cutting down of schooners into barges, I have been wondering if we have come across something which might be of interest to you. In McGregor's, Harbor here there is an old wrecked barge (?) which has been there ever since the oldest inhabitant can remember. As stepped off, it is 108' long, and made of oak. The timbers are still good, but it appears to have been burned to the water line, as some of the ribs are charred. The distance between centres of each (double) rib is 2'3." The planking on the sides is held in place by spikes, one of which I am sending you. The inner and out planking is bolted together through the ribs by bolts about an inch in diameter at the ends.

I am also enclosing photos which you may find interesting. One is of all that remains of the dock in the once flourishing McGregor Harbor. Another is one we took last year. We walked to the Cape Croker Lighthouse, driving to the end of the road at "Little North Bay," and walking around the "Cove of Cork" (near where the steamer Manitoba ran aground a few year ago), and along the north shore to the light.

Part way around we saw what appeared to be timbers in the water, and I, always being on the lookout for wrecks, investigated. It turned, out to be part of a boom—12 huge logs, about three feet in diameter at the large end, joined together with boom chains with toggles on, them. This is not visible from the water, we are told, and except for our determination to walk to the light that way, we would not have come across it.

"In the Bag"- Salvaged portion of the CALEDONIA loaded on a waggon for removal from the beach. Incidentally, the picture is a good illustration of the methods of shipbuilding in Schooner Days; first the keel, across that the floor timbers, above them the keelson, bolted through to the keel, with the stem arising at the forward end.

SALVORS OF THE CALEDONIA—Mr. Gordon Conant with his sons Roger and Douglas, and Col. Frank Chappell, Al Talbot, C. M. Laing, C. Myers and Alex. Brooks got the Caledonia up and out.

WRECKED BARGE in McGregor Harbor, photographed by Mrs. Blathwayt. This was apparently a centre-board vessel, and may have been a schooner. 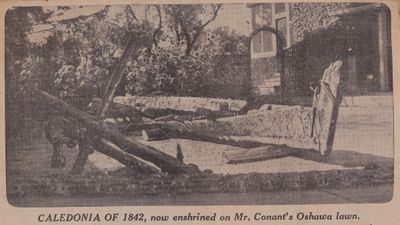 In the Bag -- CALEDONIA on a waggon

Salvors of the CALEDONIA