"O up and spak an eldern knight,

Sat at the king's right knee:

That ever sailed the sea."

SO runs the venerable ballad, and one can well believe the eldern knight had grounds for his assertion-when one thinks of the Spences who used to sail out of Saugeen, or Southampton as it is now,—old Captain John and his four sailor sons.

Captain John of that name was born at Birsay in the Orkney Islands the year the battle of Waterloo was fought. When he was fifteen in 1830, he was apprenticed to John Hay, of Stromness, to learn the boat building. Stromness boat building was no mean branch of marine architecture a century ago, for from that little town, across the island of Pomona from Kirkwall, on the Scapa Flow, went most of the whaleships of the then flourishing Greenland fishery.

Hundreds of whalers fitted out in Stromness for the Greenland Sea and the Hudson's Bay trade, and they used thousands of whaleboats. The local fisheries used hundreds more— "yolls," "skaffies," "sixerns" and so forth, as the native types, descending from their ancestral viking ships, were called.

When John Spence had served his six years he shipped on the good brig Phoenix, of London, probably as cooper or carpenter, for the whale fishing in the Davis Straits. Being now of man's estate, twenty-one and a skilled workman, he made a contract with the Hudson's Bay Company to work for them at York Factory as a ship-carpenter.

His first job was to refloat and repair an English ship which had gone on the rocks in the company's service. He got her off, repaired her, sailed her down to Ungava, and discharged her cargo at Fort Chimo. It being too late to do anything further that winter he made a voyage to England from Ungava and returned to York Factory in the spring.

After building several boats for the company there he was sent to establish a post one hundred and fifty miles up the Georges river. This done, he was called to build more boats at a high inland post above Fort Chimo. When one was completed she was laden with furs and brought down to the brink of a very high cataract. Here the furs were baled in canvas and portaged three and a half miles and re-embarked in canoes and paddled down to the fort on Northwest River. The newly built boat was left above the cataract to carry goods up to the upper post next fall.

Captain John's "time" was completed, but the company prevailed on him to stay at Fort Northwest River and build two more boats. In the spring he was engaged to sail one of the company's trading vessels, along the Labrador coast between Rigolet and Kipicot, two trips a season to Sandwich Bay, where the goods sent out from England were landed. In 1848, after three seasons of this hard trade, Capt. Spence, now aged thirty-two, decided to see this Canada on whose outer fringe he had fried and frozen for a dozen years. He came to Quebec, and from there to Kingston. Here he met his future wife. Although they made their home far to the west, the Limestone City could always claim them. Captain William Spence, one of their sons, died there last summer.

In the spring of '49, Captain John pushed west. But his search was not' for the "gold in Cal-eye-forn-eye-o," which then had the forty-niners flocking, but for a good spot for fishing and trading with the Indians. After a roundabout trail he found the Saugeen peninsula sticking up like a sailor's thumb between the Georgian Bay and Lake Huron; pine and hardwood all over it, lake trout and whitefish all around it, and Indians all through it. Others may have been there before him, but he was one of the first two white men to settle in the wilderness. A Captain Kennedy, who came with him, was the other.

They walked back through the bush together to Owen Sound bought a canoe there, and went to Colpoys Bay, site of the future town of Wiarton. From here they portaged to the Sauble River, and then paddled down Lake Huron to the Saugeen. Here they built their shanty; and where their shanty was built the present town of Southampton stands.

Nearby, in Lake Huron, was a group of small islands where the whitefish came in millions at certain seasons. In the fall the herring came in tens of millions. The group is known on the chart as the Fishing Islands.

All summer they worked at making barrels, hiring what coopers they could find to help them. The wood for the barrels was right at hand on the stump—virgin oak and elm and ash; pine, cedar, beech, maple and hemlock.

They also built or bought fishboats and a little vessel of some sort; perhaps the Ellen of Saugeen. When the time for the fall fishing came on Capt. Kennedy sailed down to Goderich for a cargo of salt, after leaving Capt. Spence with the summer's output of barrels at Whitefish Island and Main Station Island, of the Fishing Islands group, ready for the season's catch. The old stone trading post, still standing on Main Station Island, was built by these two captains.

When Capt. Kennedy got back with the schooner swimming deep with salt, bad news awaited him. A Government man — may their shadows ever shrivel!—had been around and seized all the barrels. He claimed they were made from timber cut on "government land" and cut without a license. The fishing had been good, the catch was all ready for salting, and here ruin threatened the partners' first year's effort.

Courageously they resolved to salt the catch in bulk in the schooner's hold, and take it that way to the Welland Canal, where they hoped to dispose of it to St. Catharines merchants.

They got down Lake Huron and Lake Erie all right, escaping the expected freeze-up, but the long open fall was their undoing. The fish sweated in the hold, and when they at last reached St. Catharines they not only failed to sell the cargo but they had to hire teams to haul it away from the reeking hold, and lay the vessel up for the winter— with her hatches off.

Nothing daunted, they returned to the conquest of Saugeen, after a few weeks in Kingston. All next summer they made barrels where Southampton later grew. In July Capt. Spence brought his bride up from Kingston and the settlement knew a woman's influence. In the fall the fishing prospered. The partners had taken the precaution of securing license for the timber they had cut for the barrels; so they made a profit on their season's operation.

But Sir John Franklin was lost and strong men who knew the ice there were called to find him. Capt. Kennedy, being skilled in Arctic navigation, was engaged by Lady Franklin for the purpose. Capt. Spence lost one partner, but Capt. Kennedy gained another. He did not find Sir John, but he married Lady Franklin's niece. Captain John carried on, and Southampton and Port Elgin grew up around him. In the spring of 1866, in partnership with George Allen, he bought the schooner Patton. Bruce County was being farmed to some purpose by this time, and there was grain, lumber, cedar posts, cordwood and tanbark to be carried to Goderich, where the Patton would load salt for the fishery. Towards the end of the year George Allen was drowned off Inverhuron, and so Capt. Spence sold the Patton. In her place, during the winter he built a tidy little schooner of 4,500 bushels capacity, which he called the Nemesis. He painted her black and gave her a smart figurehead, in the form of a dragon. Perhaps he had that government agent in mind when he named her after the Greek goddess of vengeance; perhaps she commemorated an old ship of his Hudson Bay days. There was a nemesis attached to her, of which he little dreamed and which he little deserved.

COLLINGWOOD'S FISHNG FLEET IN THE 1870's - Ancestors of the "Mackinaw fishboats" once well known in Toronto and Bronte. The fishboats with which Capt. John Spence pioneered the industry near Southampton were probably similar. Not the sprit mainsails and loose-footed foresails, details of rig long since vanished. 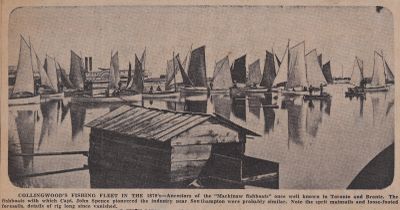