IT is the rule now, in the Canadian Marine Department, that registration is refused a vessel seeking to use the name of a vessel already on the register. That perhaps is fair' enough, although it is rather maddening when you find that you cannot call your ship Leviathan because someone else has already registered a rowboat in that name.

In the old days there was no such nicety. In the British register of 1880, for example, there are thirty-seven vessels bearing the name Olive Branch. It makes one think of the blessedness of the gentleman with the full quiver. Two Olive Branches flourished and faded on Lake Ontario about that time; one a 300-ton schooner that went down off the Ducks, another a small stonehooker scow of about 30 tons, which was lost on Mimico Point.

Another popular name in Canada long ago was New Dominion. There is no competition for it on the marine register now, but in 1867 and the following year three or four New Dominions acclaimed the arrival of Confederation.

That is what everybody expected the White Oak to be called when she was launched at Oakville, on the first Dominion Day, July 1st. 1867, but Col. Chisholm fooled them, though the secret was kept until the launching bottle was cracked. White Oak was the name the Mississagas bestowed upon the head of the Chisholm clan for his upright carriage and just dealings with the red men of Trafalgar township.

One New Dominion was launched at Port Dalhousie in 1867. She was owned by Alexander Peters, of Toronto, and hailed from this port. At one time she did a sort of market garden and truck farm trade between Toronto and Buffalo, via the Welland Canal.

She was a two-masted schooner of 154 tons register, 99 feet long, 21 feet beam and 8 feet 6 inches depth of hold. Another New Dominion was built in Sophiasburg township in Prince Edward County that same year, and hailed from Picton. She was about 110 feet long and registered 220 tons. Still another New Dominion was launched at Port Rowan, on Long Point Bay, Lake Erie, in 1868. She registered 203 tons, being a size between the Toronto and the Picton namesakes. Until recent years there could be seen in the harbor of Port Dover, Ont., the decaying remains of a schooner, the Allans of that port had bought to rebuild and never finished. According to tradition she had been built on "salt water"—perhaps at Sorel. One, too, was named New Dominion.

In 1900 there came back to Toronto a New Dominion which had not visited this harbor for many years. She was a queer looking craft, of about the tonnage of the Port Rowan or Picton bearers of the name. Capt George Irving had bought her "up above," which was our general name for Lake Huron, Lake Michigan, Lake Superior and the Georgian Bay, and she bore the legend "of Dresden" on her flat tumbled-home stern.

Manifestly she didn't come from Germany. Dresden, Ontario, is not a lake port, but a little western town which once was a port of registry. She looked, as sailors say, as if she was just out of the bush, for she had no topmasts and her mainmast terminated in a sort of whittled spike for the accommodation of her fly, a windfinder, and she also had a spike bowsprit. Capt Irving soon changed her to orthodox rig, with a pair of gafftopsail and forejibs and she plied Lake Ontario for twenty years longer. She was owned in Belleville and was burned there and broken up a dozen years ago.

In the absence of other information it is possible that this "of Dresden" New Dominion was the Picton one, and that she had begun life where she ended it, in the Bay of Quinte, after an upper-lake interlude. New Dominion foundered in Lake Erie on Oct. 26th, 1884, drowning all hands, and this, again in the absence of more information, was seemingly the Port Rowan one.

Capt. Nick Stark, of Port Stanley, Ont., and later of Detroit, that likeable Irishman who, as Mr. Geo. E. Currie said recently, was always getting out of one trouble or into another, at one time owned and sailed the schooner New Dominion, of Picton. One winter in the early eighties he laid her up in the harbor of Kingston, Ont. That winter was an open one at Detroit, Toledo and Cleveland on Lake Erie. At that time everybody depended on natural ice for refrigeration. While the ice was thin at Toledo there was plenty of thick ice in Kingston Harbor, for the winter was more severe on Lake Ontario.

Somehow an enterprising ice dealer in Toledo learned this fact, and that the schooner New Dominion was laid up at Kingston. So, before the winter was gone, he chartered her to load and bring a cargo of ice to Toledo, "free in and free out."

In the spring, navigation opened much earlier at Toledo than at Kingston. The New Dominion made a slow trip from Kingston to Toledo, being late in starting and detained several days at the Welland Canal. By the time she arrived at Toledo a large part of the ice had been pumped over board. The ice man refused to pay the freight, so Capt. Stark brought suit for his freight and charges for detention.

In the charter the captain had agreed to deliver the cargo "in good condition unless prevented by act of God." The court awarded the captain his freight, but refused his demurrage charges for the same reason for which the ice man had been unable to receive the cargo, as it was all melted "by act of God.'

As against this unsatisfactory bit of navigation, for which the Almighty was rather shabbily given the blame, take the experience of Capt. John Williams of Toronto, in the Speedwell, in 1889.

He got a contract to bring ice to the breweries in Rochester, at $1.50 a ton, and in February fitted the Speedwell out and sailed from Toronto harbor. He intended to load at Presqu'isle, where there was ice of the specified thickness, 14 inches.

It looked like snow as he slipped down the lake, so with night coming on he put into Whitby, where the harbor mouth was open. There was good clean ice in the bay there, but only 10 inches average thickness. Capt. Williams wired the brewery and found this ice would do, got his ploughs and saws over the side, hired horses, and loaded right where he lay. He was into the Genesee River at the Port of Rochester by the third week in February with a $600 freight, and back there again before the first of March with another ice cargo, this time from Presqu'isle.

He then loaded coal for Toronto, and came into this port with over $1,000 freight money in his stateroom, and a shining silk topper for being the first arrival of the season in Rochester. In Toronto he was awarded another "harbormaster's hat" for being the first loaded vessel to enter this port.

"I've had a good life," said Capt. Williams at the sidesmen's board meeting at St. Aidan's Church the other night. "Thanks to my wife's and my mother's prayers, or perhaps what some would call luck, I've come through fortunately where others have failed. I'd like to live it all over again."

Capt. Williams' "luck" was a combination of prayer and elbow grease. In the hard times of 1885 and 1886 on the lakes, when he had just bought the little W. T. Greenwood, and schooner after schooner was "going in the hole" and laying up because there was not enough money in freights to run her, Johnny kept her sailing and she made $600 in the season. Next year she earned his whole interest in her. And yet he was carrying coal from Oswego to Hamilton at 20 cents a ton, $60 for a trip taking a week or more, and paying wages, grocery and tow bills out of that. He made her go because he did two men's work himself, never sleeping except when in port, and often sailing with a crew of which the "best man" was the motherly old lady who did the cooking.

Capt. Dolph Corson fitted the W.J. Suffel out early that same winter when Capt. Williams made the thousand dollar hit with the ice cakes. The Suffel was in Charlotte when the Speedwell brought in her second load. The two captains tossed a coin to decide which vessel should load first at the coal trestle. Capt. Williams won. The Suffel followed him out into the lake, bound for Hamilton, only a few hours behind the Speedwell in starting. The Speedwell was slow and a hard steerer. The Suffel was smart and handy. In the run up the lake the Speedwell sped very well indeed, to be able to hold her lead on her competitor. It came on to snow after she got into the harbor here, and the Suffel ran on and wound up on the beach at Burlington—a fine way to open navigation into Hamilton!

This talk of good luck and hard luck sometimes makes one think of the two frogs that hopped into a churn half full of buttermilk. 'Froggie No. 1 said; "There's no hope for us. The sides are so steep and slippery and they slope in to the top. Farewell, cruel world. Glub, glub," and, folding his hands on his stomach, he sank to the bottom. The other frog kicked and kicked and kicked, until his continuous beating produced a pat of butter. So he climbed aboard, waited till he had caught his breath, and then, with a mighty spring, cleared the edge of the churn and hopped home.

"ROUND THE WORLD AND HOME AGAIN"

"SCHOONER DAYS does have a wide range," writes J. H. Safford from Detroit, "as witness: In a Grand Haven Tribune of recent date was the Telegram's article of Jan. 18th reprinted, and a lead saying, "Arnold VerDuin, while in Jersey City, saw this article by a former Grand Havenite in a Toronto paper, The Telegram. VerDuin is a descendant of three generations of Hollanders, sailors and fishermen out of our port in Michigan."

Mr. Safford, is right. The same mail brings a clipping from the Brandon Sun, reproducing The Telegram story of the loss of the schooner Pioneer. In that story there were two errors. The date should have been 1871; and the name of the Pioneer's cook, before she married the captain, was Mrs. Pement.

SCHOONER "NEW DOMINION OF PICTON," drawn by Gibbons and Hunt for her captain, Nov. 3rd, 1876; a picture for which Schooner Days is indebted to a constant and consistent admirer, Mr. W. R. Humphreys, of 997 Eastern avenue. 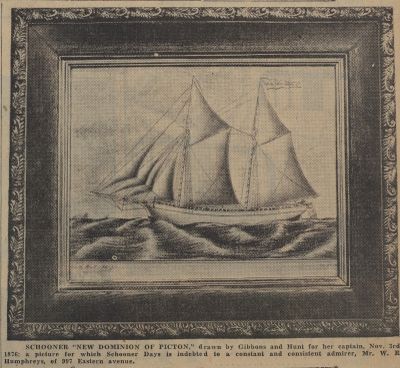