Publication
Toronto Telegram (Toronto, ON), 9 May 1936

THAT query list propounded by Dr. C. E. Stothers, inspector of public schools in Prince Edward County, regarding Prince Edward vessels keeps tickling the fancy of Schooner Days, and it looks as though there would be no rest until it has been answered. The Oliver Mowat, Fabiola and John Ray have been accounted for. Now let us try some more.

Dr. Stothers mentions the Hibernia, of whose business he has records, but no other information. With the assistance of Mr. S. A. Clark, of Toronto, and other Prince Edward stalwarts, it is possible to report that the Hibernia was built at the mouth of Black Creek, which flows into South Bay, a mile or so above Port Milford, in the year 1863. Her owners were William Ellis and Patrick Mahon, or McMahon. Thomas’ Marine Register of 1864 gives them as Ellice and McMahon and mentions the Hibernia’s measurement as 141 tons register and her insurable value as $5,600. The builder was David Tait, the elder of the two Taits (John being the other) who, between them, built more Prince Edward County vessels than any other ship carpenters in that great cradle of centreboard shipbuilding.

The Hibernia was a fore-and-aft schooner of 7,000 bushels capacity, and William Ellis, her owner, was also her first captain. After three years his brother, Hiram Ellis, bought Mr. Mahon’s share, and in the same year, 1866, the brothers sold her to someone in Toronto. Here, right at home, the trail temporarily ends in a blank. Who knows what became of the Hibernia after she reached Toronto? In her Prince Edward days she was engaged in the grain trade to Oswego and American ports and the wood trade, then a flourishing business, to Toronto and the west. Steamers, locomotives and domestic heating all used great quantities of cordwood at this time.

On this vessel that veteran mariner Capt. Nelson Palmateer should be an authority, for he sailed in her, as a boy, with his father and his brother Albert. She was a small schooner, originally a scow, built at Kingston, but she made long voyages to Lake Erie at times, seventy years ago. Rebuilt at Bath in 1880 for Wm. Ostrander of Picton, and finished as a plumb-stemmed schooner with proper transom stern, she was rechristened the Flora of Picton, and ended her life at Oakville on April 14th, 1894. On her first trip of that season, from Toronto for Hamilton, under Capt. Alfred Thomas, she attempted to take refuge in Oakville harbor after her steering gear had carried away. Steered by the trim of the sails alone, she passed the lighthouse and had almost entered the channel when a sea swept her on to the shoal just west of the west pier, and there she left her bones. The painted star on her stern twinkled with fading lustre for a long time. She had a little cutwater-knee and was painted green in Capt. Palmateer’s youth. As the Flora she was painted black above and green below and wore a very long bright red whiplash fly or windfinder. She was 90 feet 3 inches long, 18 feet beam, and 6 feet deep in the hold, and of 76 tons register.

This little schooner’s loss, which occurred in the fall of 1890, is one of the many mysteries of lake navigation. She was owned and sailed by two old friends, Capt. Wm. Martin and Capt. T. Brokenshire, and she left Trenton with a light buoyant cargo of barrel-headings, shingles and other lumber, for Oswego. They planned to take a cargo of coal back to Cobourg and then sell the vessel and retire after a long life in lake-faring. She never reached Oswego, but following vessels passed through acres of her cargo, strewn on the surface of the lake.

The Ocean Wave had been built in Picton harbor twenty years earlier by Jack Tait, for Walter Bros., J. E. Hicks and Geo. C. Curry. Capt. Peter Hicks was her first commander. She was a sharp fast vessel and rather tender. The hardwood headings, carried on deck, would have a tendency to make her top-heavy. An account of her loss was given in Schooner Days Nos. LXXVIII. and LXXII, three years ago. She is not to be confused with the steamer Ocean Wave, bumped off Point Traverse, April 30th, 1853, whose purser’s safe, supposed full of gold and silver for transfer to the bank in Kingston, still teases the imagination of Prince Edward County fishermen.

Irreverently nicknamed “Black Sal” this dusky schooner, original name unknown—the earliest register gives it only as “Quinlan,” without building data—was rebuilt in Port Hope in 1870 and christened or rechristened in honor of the daughter of the mayor of the town. She was 97 feet 3 inches long, 18 feet 8 inches beam and 9 feet deep in the hold. Narrow and deep, with too much dead-rise, sailors hated her for her “crankness.” This has nothing to do with temper, but much to do with stability. A crank or tender vessel is one which falls over easily, and you can always spot the greenhorn by his saying “cranky” when he means crank. As he probably doesn’t know the meaning of either word not much harm is done. However, the; Eliza Quinlan was owned by W. H. Braund, of Port Hope, in 1874, and not very long afterwards she was lost on South Bay Point, or Point Traverse, by Capt. Hughes.

Built in Kingston, 1867, and hailed from there. Capt. W. R. Taylor was her owner. She was 107 feet long, 24 feet beam and 9 feet deep in the hold, and registered 201 tons. When I first knew her, forty-four years ago, she was painted white, with a lead-color bottom, but when I last saw her she was green on top and lead below. Capt. Murney Ackerman lost her off South Bay Point on passage for Kingston, in November, 1904, and “Shell” Sullivan one of her crew, died of exposure before the shipwrecked crew reached Emerald, on Amherst Island, in the yawlboat. The Annie Falconer was a good carrier, and long traded out of Prince Edward County, but I never heard high praise of her handiness.

THE FLEET WING—Not built in Prince Edward County, although she left her bones there, beside the canning factory wharf in South Bay. The picture, kindly lent by Mrs. Matthews, of Port Hope, shows her in the Welland Canal many years ago. Her jibboom is topped up for passing the locks, as was the custom. 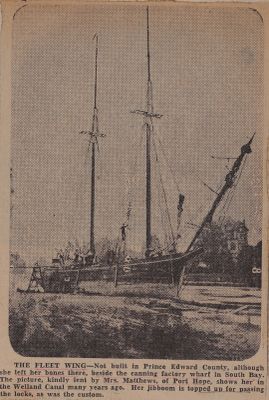