AND then there was the Gold Hunter. There were two Goldhunters, in fact, and the first one was built by Quayle and Martin at Cleveland in 1856 and bought by Wm. Mather, of Chicago, before 1864. She was a “big fellow” for her time, and registered 386 tons. On Sept 9, 1878, she brought in a cargo of 18,000 bushels of corn to the Collingwood elevator.

But THE Goldhunter of our particular interest was the smaller Gold Hunter, built in Prince Edward County in 1862. In the preceding fall Capt. William Dulmage laid a hundred-foot keel of good white oak at the mouth of Black Creek, which flows into South Bay, north of Port Milford, and set up some frames of the same good county material. The keel was the backbone, the frames the ribs, for a new schooner. In the spring he sold this skeleton to Capt. Cummings Hume. He took unto himself partners, William Ellis and Jacob Jackson, of Milford, and they engaged that master builder of Prince Edward County, Jack Tait, to complete the vessel. Tait had the ability, rare in shipbuilding, to keep several jobs going at once and do them all well. This vessel was completed by September, 1863, in time for the fall rush of the grain trade after the harvest. She measured 263 tons register, a measurement later reduced to 219 tons without impairing her carrying capacity, and proved capable of stowing 13,000 bushels, a big cargo for a Bay of Quinte trader. But Jacob Jackson had broader ambitions than the short-haul grain trade between bay-ports and Kingston or Oswego, and that same fall he bought out his partners and put her in the great grain carrying traffic from Chicago to Collingwood in the Georgian Bay or Kingston at the foot of Lake Ontario. She was a smart, handsome, two-masted schooner, painted white above the green below, with appropriate trimmings, a clipper bow, and “GOLD HUNTER of MILFORD” on her shapely stern. Her name, we are informed, was originally spelled in two words.

S. A. Clark, of Toronto, an old Milford boy, says his friend, Dr. Andrew Rose, later schoolmaster in the Jackson School, near Milford, who died in Toronto this week told him only a fortnight before that the first orange he ever saw was given him by Jacob Jackson from a crate full, provided by the owners of the Gold Hunter at her launching. Old Mr. Jackson, he says, had been a shipmaster and a mighty Nimrod as well, and many a bear and wolf had fallen to his unerring aim with a flintlock musket, before he took to launching ships and giving small boys oranges and great stories. The Gold Hunter was well named, and made money for him, but in the end proved unlucky. Old Jacob Jackson said his financial ruin resulted from her destruction by fire.

When this occurred is not clear, James H. Hickman, of Toronto, is given as her registered owner in 1873. It may be that he bought her charred hull from Mr. Jackson and rebuilt her. She appears to have been owned by the Sylvester Bros., wharfingers and shipowners, of Toronto, at one time, for in the possession of the family is a wash-drawing with the inscription. “Her Majesty’s gunboat Prince Alfred, towing schooner Gold Hunter off lee shore, Georgian Bay.” The story has been lost, but the Gold Hunter, from the drawing, seems to have been in considerable distress. The Prince Alfred was a provincial gunboat, as distinguished from the Imperial gunboats sent out from England. She was manned with a crew of seventy men from H.M.S. Aurora, and was one of half a dozen in service on the upper lakes at the time of the Fenian Raid of 1866.

There is also in existence a protest, or marine deposition made before a notary public or magistrate, in which the Gold Hunter is mentioned. Herein is set forth the facts that the schooner Gold Hunter, of the Port of Milford, had carried a cargo of 2,200 bushels of oats, 32 tons of hay, and two barrels of black oil, from Windsor to Collins Inlet, evidently contractor’s camp supplies. In the Inlet she loaded 165,000 feet of lumber at Staples and Sintenberg’s mill and sailed for Windsor again on an unlucky Friday, the 3rd of November, 1871. Getting under weigh in Smith’s Bay, under Cape Smith, in Manitoulin, whither she had run for shelter in a gale of wind and snow, she had struck on an uncharted shoal where the Bayfield survey, the Bible of the schooner men, showed 54 feet of depth. And there she stuck, her hold full of water. Her master at this time was Robert Shanks; and Shanks’ mare which bore the bad news was the steamer Chicora, then new to the upper lakes. He had caught her at Killarney and come down in her to Collingwood on Nov. 7th, to enter his protest and obtain assistance. The outcome of the adventure is not given in the document.

A VOICE FROM THE GREAT CATARACT

Sir,—Your article concerning the schooner Fabiola interested me very much, as I am a descendant of the D. W. Allison to whom you refer; my father was the late Malcolm R. Allison, former Crown Attorney and clerk of-the peace for Prince Edward County.

I am sorry that I am at present unable to answer your question regarding the builder of the family vault at Adolphustown, but I do know that this D. W. Allison, as a Liberal in politics, was elected to the Dominion House of Commons for Lennox in the years 1883 and 1891, and that he was the only man who ever won an election over Sir John A. Macdonald who, as you probably already know, spent his boyhood in Adolphustown and won his first case in Picton.

Mr. Allison owned over 1,100 acres in Adolphustown, and in 1880 built a beautiful residence about 200 yards south of the place where the first Loyalist landed in that town at the mouth of Town Creek. He travelled a great deal and had mineral possessions of much value in both Canada and the United States.

At one time Mr. George Currie, former police magistrate of Picton and father of Dr. Morley Currie, who practices in Picton, established a shipyard which he conducted successfully for several years. It may have been at that time that the Mr. Allison to whom you refer assisted in building the Fabiola.

I, also, am very curious concerning this matter, and will endeavor to find out the truth as soon as possible. If my father was alive he could tell you instantly as he was a veritable encyclopedia on family history. But perhaps some of my other relatives will be able to furnish me with the desired information. I hope I may send it to you later.

Schooner Gold Hunter Being towed off a Lee Shore

THE CHICORA WHEN SHE ACTED AS SHANK S MARE—A rare photograph of the old blockade runner when she first came to the lakes. 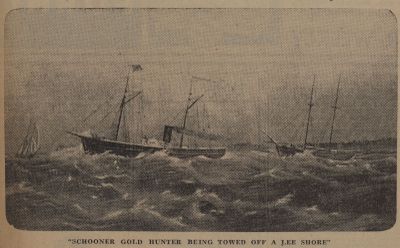