Lakesmen tell of the loss of the Macey in an altogether different way, and they usually preface the story with the observation that all the Gothams were sailormen, and that their lakesfaring was pretty much of a family affair until it was disrupted by that screaming gale of wind one November night on Lake Erie.

The sentiment that prevailed between Emdoubleyew Gotham and his younger brother Jim was stronger than the ordinary bond of family ties. They had started sailing together as boys, and they had kept together as youths and as grown men. In the mosquito fleets of Lake Michigan, in smart lumber hookers, in big grain schooners and in bigger ore carriers, they had come to command by the rough ways that start from the hawsepipes, and end in the cabin or on the bridge. Each recognized superior qualities in the other. Each considered himself the other's guide and mentor in small affairs and his follower in big things.

At the start of the 20th century sailing days were nearly ended. The "muslin captains" of the Great Lakes had had their time of prestige. Lakewise sailing vessels were being speedily used up in the donkey work of small and unattractive freights, and would not be replaced.

Emdoubleyew had long since forsaken sail for a master's berth in steam. Jim preferred canvas. He was master of a big full-rigged, red-hulled four-masted tow barge, the Mabel Wilson, 242 feet 9 inches registered length, 39 feet 2 inches beam, and 16 feet 2 inches moulded depth. She was so big lake legend that her stem had to be adzed off to let her into the locks of the Welland canal the first time she towed down from "Up Above." This is quite possibly true. The old canal locks were 245 feet long, but the Wilson's tons registered length of 242 feet 9-inches was only the distance between stem and sternpost, was therefore several feet less than her actual length. The picture of her shown above as originally drawn; for the Olive Jeanette, but it gives a perfect idea of the Mabel Wilson as her master thought of her; a little flattering, as a matter of fact, but accurate. The Qlive Jeanette, by the way, came safely through the great gale on Lake Michigan which put the steamer L. R. Doty, which was towing her, into Davy Jones locker.

Jim loved his cumbersome command, as all true masters love the ships that they sail, and like all good lakes masters, he believed and boasted that his vessel was "the best ever built out of wood and iron" . . . or had been so in her prime.

Refusing more than one offer of a good berth in steam, he stayed in the Mabel Wilson for no better reason than that she carried canvas, and could, if the necessity arose, make her own way under the power of wind pressure applied to trimmed sails.

Emdoubleyew was not so enthusiastic over the Mabel Wilson, as was his brother. He regarded her as a not altogether trustworthy elephant for the behavior of which he was partly responsible, and on more than one occasion he declared that he'd be damned if he'd tow her the length of her stays-sheet if anybody but Jim were sailing her.

In his canvas-loving heart Jim believed that, given the breeze and enough of it, the Mabel Wilson under sail, could outstep the best steaming time of the Macey and most other Great Lakes steamers. Several times he nearly proved his contention. Once in a spanking norther on Lake Michigan he sailed his big barge up abreast of the Macey with the huge bight of the tow line dragging between them. Emdoubleyew always claimed that the Wilson's bow was just abreast the Macey's waist, but Jim declared with some vehemence that he got his vessel broad abeam of the Macey and would have cast off the tow line and passed her if the wind hadn't lightened.

Four times in one season Jim pushed the Wilson, under sail, so close to the Macey that he could hit the steamer's after hull with thrown chunks of coal or iron ore; and once he was close enough to heave a small chunk of fantail.

Then there was the time when the Straits of Mackinaw with the Oak Leaf to windward of them and racing, and better than half a gale from the nor'west chasing them through.

The Oak Leaf certainly had speed. She had been brigantine rigged. She was an old horse to sail with following wind and her Norse skipper drove her without mercy. It was his boast that he didn't know what reef points and earrings were made for and he claimed that he "nefer took not'ing off until other fellers was close reefed and making the sign off the crosses on theirselfs."

He failed to run away from the Macey and the Wilson; that time in-the straits, and Jim had the Wilson's bow nosed up full abreast of the steamer's quarter all the way through, with her towline trailing like a deep fish hook, so Emdoubleyew couldn't say that the barge held him back any at all.

Ultimately the Mable Wilson outsailed the Silvanus J. Macey and worked up Lake Erie alone; but Jim took no pride in her performance.

They cleared Buffalo on Saturday November 22nd, loaded with coal. The wind was fair up the lake and there was a forecast of strong southerly winds, veering to southwest, so they edged over to the south shore to have a lee when the shift of wind should come, it came at nightfall, a rough and tricky half a gale from the south'ard, which hauled to the sou'west before midnight and blew hard. There was a wicked sea running and the Macey wasn't making good weather of it with the heavy big barge dragging oh her after bitts.

They shifted their course to better than a point north of west so the Wilson could make half canvas and carry a full-and-by. Both vessels were staunch. The Gothams weren't worried; it was a bad blow, but they'd weathered worse. The Macey was getting old, but was sound as a dollar. At a recent inspection for fall insurance she'd maintained her A-2 classing. The Mabel Wilson was good for anything that the gods of the lake winds chose to send her.

Each of the brothers had full confidence in what the other could and would do.

Along toward morning, when they'd clawed past midlake and were over toward the north shore the gale went hog dirty. The Macey's whistle moaned a signal, but its blasts were smothered in the roar and howl of the wind.

The tow line dropped slack and came home, and the Wilson's people knew that it had been cast off and that they were on their own. The Macey was in trouble. She was steering wild; yawing and wiping badly. Jim Gotham figured that her steering gear had gone flukey; but he wasn't anyway worried. He knew that Emdoubleye wouldn't be stuck. He'd rig some sort of jury gear and if it didn't handle her right, he'd run her back to shelter under Long Point; although ducking her behind headlands when it happened to breeze up, wasn't Emdoubleyew's idea of the right way to handle a vessel.

Wind imps shrieked mad accompaniment to the drumming of Erie's weather gods on straining canvas and their wild strumming of over- taut wire shrouds.

Two men labored at the Mabel Wilson's wheel. She was plenty for any two men to keep on a course on that wild night. She wallowed past the Macey, which appeared to have stopped, and was, perhaps, drifting astern. Jim Gotham identified a figure on her monkey island—the little square atop her wheelhouse—as his brother, Emdoubleyew Gotham, waved. Jim mistook the gesture for a signal of direction that he couldn't understand, it was really farewell.

The Mabel Wilson thrashed on into the storm wrack of the early dawning. She was swinging close reefed muslin on all four spars and had her full forestays set. It was dark and too thick with flying spray for any of her people to see very much. The Macey's lights were blotted out.

Jim took nearly four days to thrash the big barge up Lake Erie. He spoke to two freighters and three fish tugs for news of the Macey and got no report.

He was beginning to get anxious. He told himself that Emdoubleyew could take care of himself anywhere, so there was nothing to worry about there, but one of Emdoubleyew's sons and Jim's nephew was mate of the Macey, and another younger one was watchman, and most of the rest of her crowd were friends of Jim's: so he made himself believe that all his concern was on their account. One or several of them might have been washed overboard or hurt in the engine room; or something, and he'd kind of like to know about it.

No doubt in the world but Emdoubleyew had brought his vessel through all right and was probably sheltered somewhere or maybe had run in somewhere for repairs to the engine.

When he made Detroit River he hailed the master of the tug that came out to pick him up; "Where's the Macey?"

"Where'd she leave you?" the towboat man countered. "The Allbright reported wreckage strewed for five miles on the lake off Long Point, and her mate thought he recognized part of the Macey's cabin top. There wasn't no names nor nothin' that they could see."

Jim knew that he hadn't been worrying about men going overboard or hurt in an engine room accident.

"Thasso?" he called. "We-ell, I -- I guess it sort of looks like maybe Emdoubleyew and the boys are gone."

The Macey had gone down with all hands. Another of the long list Great Lakes mystery wrecks. The steamers Allbright and Seneca sighted parts of her wreckage. Gotham didn't know that his brother was waving good-bye when he glimpsed him standing on the monkey island or that the vessel dropping out from under Emdoubleyew's feet.

The Mabel Wilson had at last outsailed her convoy, but her master took no pride in the fact. 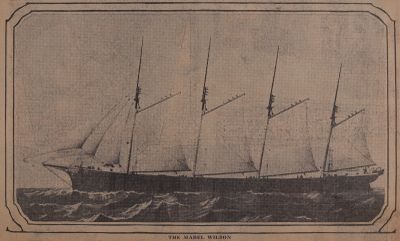