WOULD you believe it? A Fenian Raid veteran, a powerful young fellow in 1866, but not so strong now as he was 70 years ago, keeps vigil night and day over Toronto’s new waterworks system, upon which the lives, health and happiness of three-quarters of a million people depend.

Any time you care to look for him you may see him on duty right out in front of the newly-finished concrete wall just east of Silverbirch avenue, where the finishing touches are being put on the $14,000,000 plant which makes Toronto’s duplicate system the finest on the continent.

He stands in the lake, a few yards from shore, in water now only three feet deep. He has stood there for years and years, ever since your father was a boy. Storms have battered him and stripped him of all his uniform. Ice has piled over him in bergs and hummocks, and ground him to the very ribs. But he still manages to keep his head above water. A very little. Only a few inches.

Every Sunday school child in Toronto knew that name 40 years ago. Every Sunday school went to Victoria Park for a picnic—at least once. Early in the nice nineties they went by steamer—the Chicoutimi, the J. W. Steinhoff, the C. H. Merritt. They landed on the west side of a spindly pier. On the east side lay the W. T. Robb, Fenian Raid veteran, then as now guarding Canada’s shores, but since vastly changed.

In those days—August, 1891, to be accurate—W. T. Robb held his head high above water indeed. He had yielded up his engines seven years before, and they were then doing duty in the Steambarge W. B. Hall; but he was on the job in his full Fenian Raid uniform, all there and complete from the cupola on top of his ornate wheelhouse to the inscription “W. T. ROBB of DUNNVILLE” on his rounded stern. Cabin doors and port shutters were all in place. The veteran—he was a veteran even then—looked all ready to steam away as soon as someone put back his engines.

How came he to begin duty at the pier of a picnic park?

He was born a big timber tug, one of the powerful giants that used to snake rafts of timber from Lake Erie to Quebec. Register dimensions were 120 feet length, 20 feet beam, and 10 feet draught; 88 tons net and 243 gross, including the cabin space. The Robb was built somewhere near Erie's waves, at Stromness by George Hardison for Senator McCallum in 1864 and was named for a friend of the Senator’s. Possibly Captain W. T. Robb was the tug’s first master. When the Fenians invaded Canada the W. T. Robb was filled with rifle-armed volunteers and rushed to the Ridgeway front. The Andrews brothers, in their Port Robinson shipyard, dismounted a brass nine-pounder field gun and built a carriage and trucks for it and mounted it in the W. T. Robb’s bows. So equipped, the tug patrolled the Welland River. When the scare died down the W. T. Robb went back to timber towing.

It was ever a wonder to the water-wise youth of Toronto how the W. T. Robb, being a tugboat, came to have so many cabins—an upper deck and as much cabin accommodation as many a lake passenger steamer. One explanation of this was that Senator McCallum had provided them for the accommodation of his friends; another was that the upper-deck tier was added to accommodate the troops who lived aboard during the Fenian Raid. And the third was that Capt. Wm. Hall, later harbormaster in Toronto, added the deck and the cabins when he purchased the tug from her first owner, intending to combine passenger carrying with schooner towing.

Under Capt. Hall’s ownership the Robb continued in the timber trade, but instead of handling rafts towed a pair of large schooners, the John Bently and the Marquis, loaded to the rails and well above them with square timber, lumber, shingles or whatever the mills offered. The Bently was also used, when the wood trade was slack, in the excursion business, the W. T. Robb towing her across the lake with throngs of more or less happy holidayers on board and a brass band playing. It was a pleasant afternoon’s outing, before Victoria Park began.

Whatever the reason for the many cabins, their white walls eventually became an autograph album for the entire juvenile population of Toronto. After the W.T. Robb was dismantled and towed to Victoria Park, for a Sunday school scholar to have missed inscribing his name somewhere on the tug was as serious an omission as failure to eat an ice-cream cone would be in 1936.

It was Ald. Tom Davies who conceived the Victoria Park picnic ground idea, with the stranding of the Robb as a corollary thereto. It was difficult to make the landing pier stay put, with the big seas sweeping up from the eastward in summer and the ice crowding it in winter. He thought that with the gun tug nearly a hundred feet long—run inshore as far as the 10-foot draught would permit, and settled on the bottom on the windward side—the pier would be protected.

He was right. The tug’s usefulness in the towing business had departed with the vanishing of the forests. The hull was bought cheaply after Capt. Hall lifted the engines out at Shickluna’s shipyard and put them into his steam barge. The stranded Robb served as a groyne, and bedded into the beach so successfully that the old tug long outlived the pier to which he was moored.

It is hard to recognize old Victoria Park now that hundreds of homes and dozens of streets have been built there and a million tons of shale and concrete have been piled over the old picnic foreshore. The ricketty wharf and the old beach itself have vanished. Piece by piece and plank by plank the Robb disintegrated when steamers ceased calling at the park and the ricketty wharf tumbled to decay. The Robb came apart with the assistance of innumerable beachcombers, who used the seasoned planking for camp fires.

For long after the park had lost fits steamer service the veteran’s old bones were a famous fishing ground for perch. All that is left now, buried in the sand and worn round- headed by the ice like so many seals, are a few of the after-frames or floor timbers of the tug, with a concave piece which was probably the stern-bearing or shaft-log for the propeller. When paddling around the remnant recently, baby perch could be seen through the clear water, darting into the interstices which their great-great-great-great-great-great-great-grandparents began to haunt 40 years ago.

The W. T. Robb before the second tier of cabins was added.

“SO SLEEPS THE BRAVE”—Ribs of the W. T. Robb within a few feet of the 1936 waterworks station. 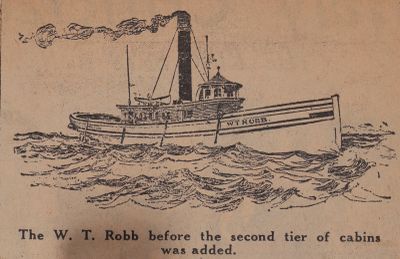 So Sleeps the Brave
Groups of Related Records