WHEN the Erie Belle lay up in the Northern docks near the old, Queen's Wharf here one winter at the close of the nineteenth century, it looked very much as if her end and the century's were going to coincide.

By this time the little golden bells at her trucks, which once made music as she curtsied to the sea, had long lost their tongues. Her bridal robe of white which had clothed her from waterline to fore-top — even her anchor stocks and lower foremast had been white — had vanished beneath successive coats of coal dust, grain dust, iron ore dust, harbor grime, and blistered black paint. The sky blue riband, which once girdled her at the deck level, and terminated in graceful scrolls around the three big golden bells depicted across her transom, had vanished. A lead-color stripe now marked her humped covering board and matched the lead-color paint of her underbody below the black upperworks. Her port quarter had sagged until the yawlboat davit on the taffrail on that side was two feet lower than the starboard one.

Still she crossed three yards on her stout tree-like foremast, relics of the days when she was known as a "barque." Topgallant and royal yards had gone, but what she had left, the fore yard and upper and lower topsail yards, qualified her to boast, if she felt like boasting, that she was the last of the square-riggers. She also retained the quintupled headstays which had entitled her to distinction as the only vessel with five jibs. The point, and the naming of these quints had been good for an argument in every waterfront bar in the thirty years of the Erie Belle's existence.

She had gravitated to Lake Ontario after ranging the Great Lakes. On Lake Ontario the coal trade was the only thing left for her, and the Erie Belle could no longer carry coal profitably. The rate had dropped to twenty cents a ton and 550 tons was all she could stagger under now. The time had been when she could walk away with two hundred more. One hundred and ten dollars a trip, from Oswego to the Toronto Waterworks, would not pay the wages of four men, a captain, mate and cook, and the tug-bills at each end, to say nothing of the groceries. It looked as though the Erie Bell's was through.

But Capt. Donald Manson, nicknamed Roaring Daniel by generation of lake sailors, last square-bearded master of the last square-rigger was not through. He had sailed out of Port Hope for fifty years, seen the lumber trade come and the grain trade go, and the coal trade follow. Steam he had no use for. Nor square sails either, for like most lake sailors he preferred fore-and-afters. There were always dozens of schooners on the lakes for, every "barque" or "brig," even when the square-riggers were in their prime. Roaring Daniel accepted the double-topsail yards of the Erie Belle, as he accepted her five jibs and her drooped quarter. They were all in her, long before he got her in her. declining years, and he wasn't going to let them beat him. Nor the vanishing coal trade either. While the Erie Belle floated he would make her sail, and find something for her to do.

A big plant had been established at Schlosser Dock, near Niagara Falls, N.Y., first of a flock of industries to disfigure the natural beauties of the Niagara gorge. Roaring Daniel pondered the possibilities. There was lots of pulpwood in New Brunswick. He had learned that when he was trading from Port Hope to Quebec with the Caroline Marsh, with cargoes of staves, when both he and she forty years younger. Poor old Carrie! She had laid her bones on the beach at Oswego, in 1891, but he was still going strong.

Why not take the Erie Belle to New Brunswick, load her with pulpwood, bring her home, and sell it at Niagara Falls? She'd carry three hundred and fifty cords, maybe more. Say three hundred and fifty. If it could be bought at $2.50 a cord and sold at $5 there would be $2.50 a cord "freight" or profit. Why, that would be—and the stub of a lead-pencil played tricks with $875, and whispered that even if it wasn't all profit it was as much as eight loads of coal up Lake Ontario would yield — if he could get them — and they wouldn't be all profit either, nor, anything like it. She had gone in the hole last year on coal cargoes …

So the Erie Belle fitted out for her twenty-seventh season.

Capt. Manson brought up with him from Port Hope for the purpose Slabline Charley, the only man left in these parts who knew how to fit out a square-rigger. On the Toronto waterfront they picked up a gang of old fore-and-afters, and soon had all the patched and coal-dusty canvas bent, including the square upper and lower topsails, with their tangle of braces, lifts, ties, buntlines, clew-garnets, brails, slablines, downhaulers, head-ropes, foot-ropes, stirrups, flemish-horses, and the whole menagerie of their gear; to say nothing of the five jibs with their disputed names and double sheets. Soon after the spring ice left the Bay the Erie Belle spread her dusky wings and followed it.

Capt. Manson was enterprising. He knew he would need ballast in the boisterous Gulf of St. Lawrence, before he could load his cargo, so he first put into Oswego, at the foot of the lake, and got them to dump five cars of coal into the Erie Belle's hatches. Though the coal was cheap quality, the investment in 250 tons of it made an enormous gap in the Erie Belle's bank credit. Still, coal was always money, whether on the trestle or in the hold, and salable anywhere, any time. The cargo just brought the Erie Belle down to good sailing lines, but left her light enough to run all the rapids of the St. Lawrence except the last ones, at Lachine. Here the canal lock dropped her neatly down to Montreal, and the river current carried her in short order to Quebec. She was thus well on her way in the first fortnight.

At Quebec the first snag was struck. The harbor office or the customs wouldn't give her a clearance for the Lower Gulf because she had no freshwater tanks. All her life the Erie Belle had dipped overside all the fresh water she wanted for her crew — sometimes too much. A scuttle-butt at the galley door had been the only container required, because there was "always lots more where that came from," as we say on the lakes. But below Quebec, with the tide making the river water brackish, and the Atlantic Ocean ahead, it was different.

So Daniel had to purchase two large empty rum puncheons and fill them before getting his clearance, and while the crew approved heartily of the improved flavor of their drinking water his billfold looked thin and weak after the subtraction of another $25. For, of course, the cheapest kind of empty barrel was priceless on the Quebec waterfront when it was learned that someone had to have it.

However, the old "barque"—she was really a three-masted topsail schooner — ploughed on down the river and down the gulf, and, Daniel being a good navigator, made the mouth of the Mirimichi in New Brunswick with part of the first month still ahead of her. After some exploration he located the Snowball Pulp Mills, arranged to buy 350 cords of pulpwood, and hauled alongside the company's wharf.

They took off the hatches and began to hoist the coal out by the horse-and-bucket method, which prevailed at that time even at the Toronto Waterworks.

"Wot's that?" inquired a mill foreman, as the first bucket was dumped.

"Oh," said Daniel, "that's a bit of ballast I threw in. I was thinking maybe I could make a deal with your boss to take it in part trade for the cargo I'm to load."

"But wot is it?" asked the foreman.

"Coal, you color-blind omadhaun, A-l American coal, grand stuff for the furnaces of your mill."

"Coal? What's that? And what for would we buy ballast to burn when we're busy night and day burning up the slabs and sawdust as it is to get rid of them?"

"Well," said Daniel, patiently, "you try a scuttleful of this coal in your stove. I suppose you don't know what a scuttle is? Well, bring a pail and fill it and take it home and burn it and tell me what you think of it."

Next morning the foreman came around early. "You're right," said he, "the stuff does burn. At any rate it gets red hot like any other stone, when you heat it up. But nobody in this country would buy it when they can get all the slabs and edgings they "can burn for the hauling. And the boss says, captain, you can't leave it on the wharf you know. You'll have to haul it away from here because it's against the law to dump ballast into the water."

Then Roaring Daniel roared louder than all the lions when Ahasuerus was living forever, but it was no good. He had to pay for the cartage and storage of the coal and agree to pay more to an agent to sell it for him if, as, and when he could.

Meantime he had been told where he could load the pulp. It was a couple of miles away, up a tidal creek, and thither the Erie Belle was hauled, by the slew and heavy process of warping, her crew running lines from bank to bank and heaving them in by walking the capstan round. When she got there they found that there was only seven feet depth in the creek even at high water. As she was drawing four feet light, with her centre board up, and would load down eleven or twelve feet with a full cargo, it meant she would stay there for all time.

Daniel roared again and they found him another berth, and the Erie Belle had to warp back into it. And after the first month was gone and second had commenced to go she was piled with pulpwood to the height of the upper deadeyes and the "XII." draught mark on the sternpost was wet. She was never built to load to twelve feet, but the hogging of her quarter through the process of age made her long in the legs.

So Daniel prepared to sail home.

And then what happened?

Next week, gentle reader, will try to tell.

"In reading the article about vessels in The Telegram on Saturday last, and noticing the name of the Wanderer, owned by Captain Wright, Port Hope, Ont., I decided to drop you a line," says friend Albert Hacker.

"About two years ago my sister died, who was Mrs. George Wright, and in looking over some papers left behind, I found a list of many vessels that sailed out of Port Hope from April 1st, 1874, to Dec. 30th, 1875. My sister's husband owned and sailed the tug Albert Wright, and his business was to tow in the many vessels sailing out of that port at that time. The Albert Wright was built by my father, the late Henry Hacker, who carried on a large shipbuilding business in that town for nearly 50 years; he also built, or re-built, all the vessels sailing out of Port Hope, among which was the Wanderer.

Thanks, friend Albert. Many of these vessels I knew and some are new to me. We'll have something more about several of them soon. 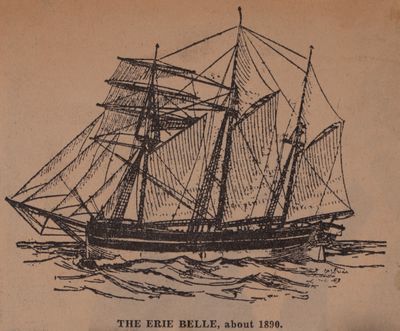