ALTHOUGH they began to populate Lake Ontario with their winged wares a century ago, and the last of their creations has long vanished, to this day the Taits, father and sons, are standouts in the ranks of lake shipbuilders.

David Tait, senior, began with a shipyard on his farm at the foot of Amherst Island. This was "the Island of Tante In the Bay of Quinte" as old shipping registers sometimes describe it, commemorating La Salle's lieutenant Tonti, to whom the island was probably granted in the French regime. It is long enough and large enough to provide many fine farms, and has two tiny towns on it, Emerald and Stella. These were grain shipping ports in the old days. The Tait shipyard at the foot of the island was some distance east of Stella.

David Tait was a scholar and a gentleman as well as a good judge of shiptimber.

He also had a sense of humor. When he built the Hibernia at Port Milford for Pat McMahon and ardent Irish Catholic owners, some Protestant wags with more chalk than wit scrawled on the launching stage, on the very morning of the launch:

"DEEDS MEDES AND PERSIANS HAVE NO FEAR

This came near to producing riotous ructions, but David Tait took his builder's chalk and inscribed below, in clerkly hand:

"WHO WROTE THESE LINES

THE GATES OF HELL."

Everybody laughed and became a good neighbor again, and the Hibernia, green as the spruce boughs which decorated the stage shipyard, splashed into South Bay amid resounding cheers.

David Tait not only built schooners in his own modest yard, by contract or on speculation, but, as was the practice of the time, he moved about wherever a customer wanted building done, taking his gang with him and setting up what plant was needed wherever the customer had the timber.

Wooden shipbuilding, unlike its steel successor, needed little in the way of permanent equipment. Keel blocks could be cut as and where required, when timber was so plentiful. So could launching ways. A blacksmith's forge for the spikes, bolts, chainplates and other ironworks, could be set up in a forenoon. A toolhouse for the men's mauls and sledges and adzes, axes, saws, planes and caulking mallets could be run up in the same time. If the schooner was being built "in the bush," as so many were, that is, at some spot near deep water at a distance from houses, there might be a bunkhouse for the gang as well. There would probably also be sawpits, for many of the early vessels were built directly from the forest trees, and both timbers and planks were sawn or adzed by hand from the log as required.

It is a strange fact that many vessels built from "green" timber lasted as well as those built from timber that had seasoned for seven years. It seemed to depend upon the builder carefully rejecting all the sap-wood when cutting the sticks. Salt pockets were built in the ship's sides and well packed with rock salt. This, kept soft by the surrounding moisture, pickled the white oak to the hardness of iron.

The first vessel of David Tait's building of which we have a record is the schooner Caroline, which he built at Napanee for Chalmers and Co., of Belleville, ninety years ago. The Caroline was typical of the Bay of Quinte traders of her time, and measured 105 tons. She was large enough to go to Oswego across the lake with profitable cargoes, although she required seven men to sail her in those hand-power days, and she was small enough to get into the little ports of Hallowell, Milford, Wellington, and the Prince Edward County shore. Such a vessel would have to be sailed by a crew of two or three men in our time, to make her pay. The Caroline was later owned and sailed by Capt. Robert Moody, of Toronto. She is registered as having been built in 1847, but old records of Picton harbor show her using that port as early as 1845 or 1846.

In 1848 David Tait rebuilt, in his Amherst Island shipyard, the schooner Victoria, of 98 tons, for D. D. Bogart, of Belleville, who rechristened her Mary Ann. Next year he built the Alert, 122 tons, on Amherst Island, for John Covert, of Belleville. In 1853, on the island, he built the America, of 189 tons, for John McGuire. Next year he built the Frontenac, a large scow schooner of 152 tons, owned by J. Morton, of Kingston. Scow models were useful in getting into the shoal bay ports and navigating the reaches. He built another scow schooner the following year in his island yard, the Mary Adelaide, of 57 tons, for C. Manting, of Consecon. Next year, 1856, he built the Catharine, of Cobourg, 109 tons; she was eventually broken up in South Bay.

In 1858 he built the Helen, 159 tons, on the island, for Ferguson and Co., of Kingston. This may have been a rebuild of the schooner Maggie Hunter, whose mysterious fate long puzzled lake sailors. The Maggie Hunter, well known in Toronto long ago, was renamed the Helen, and vanished on passage from Oswego.

Or again, this may have been the Helen of Hamilton, of whose fate Warden Amos Macdonald told at a Cherry Valley gathering, not long ago. There were several Helens on Lake Ontario. Toronto had another of them. This Helen of Hamilton came into Little Sandy Bay in September. Warden Macdonald thought the year was 1854, but it might have been later. Prince Edward County then exported fish in barrels, and the Helen called to load a season's catch which had been prepared near the Conger farm. There was a sullen roll coming in from the lake and the shore trees were moaning, and the future warden's grandfather urged the captain of the Helen to weigh anchor and get out before the storm broke. He was doubly concerned in the vessel's safety, for he was shipping some of the fish and sending two of his sons along to look after the delivery of the cargo. One lad was twenty-two, the other married, with a little son and a little daughter.

"There's not enough water in Lake Ontario to drown the Helen of Hamilton," boasted the captain, looking proudly at his 8,000-bushel schooner as she dipped and rose gently on the rollers while the loading went on.

She got away at dusk. That night the storm broke in a furious squall. Hanging on to her canvas to clear the Scotch Bonnet light the Helen unstepped her foremast and became a complete wreck. Her battered hull blew in on the western shores of Prince Edward with the unshipped mast tangled across it with its torn rigging, her decks burst in, and no trace whatever of any of her crew. "Where are my boys? What's happened to them?" Grandmother Macdonald kept asking to her dying day, every time the wind and sea began to rise.

The last vessel of which we have a record as being built by David Tait on Amherst Island is the schooner Richmond, which he launched in 1863 for F. Dickens, of Napanee. The Richmond, 87 tons, later sailed out of Lakeport, and was the first command of Capt. Capt. "Mack" Shaw.

David Tait also built at Belleville, for D. D. Bogart, owner of the rebuilt Victory, or Mary Ann, the schooner Hastings, 229 tons, and schooner Ottawa, 215 tons. They were launched in 1861 and 1862, respectively, and were his most ambitious efforts to date. They were vessels about 120 feet long, and of an insurable value of from $8,000 to $10,000. In 1861 he also built, or rebuilt, at Belleville, the schooner J. D. Schuyler, for John Paul and Co. She was re-named the Lord Clyde.

David Gladstone Tait, elder son of David Tait, collaborated with his father in much of the work at Napanee and Belleville and beyond Amherst Island. He may have built himself or had a share in the building of the above vessels, and in the building of the Florence Howard, 119 tons, at Picton, in 1860; the Jessie Brown, at Port Milford (in which his brother John had a part), and even in the little scow Tom Thumb, launched in 1852 for Capt. Thos. Davis, of Milford.

The place of her building is given variously as South Bay in Prince Edward County and Wolfe Island, at the foot of Lake Ontario. She was owned by Francis Bizzo, of Wolfe Island, in 1864. She is worthy of consideration as typifying the sort of craft that carried the commerce of Prince Edward County in the first half of the nineteenth century, at whose turning mark she was launched.

Tom Davis sailed her in her early days and so did Johnny Yott. Old Picton port entries show her bringing across 200 barrels of salt from Oswego occasionally, or mixed cargoes from the same port, consisting of gypsum fertilizer, coals, cement, sugar, tea, tobacco, rice, salt and fishermen's oilskins, valued at £476 currency, on which the duty is £43. Two men sailed this tiny trader across the lake and back; she was not much more than 40 feet long on the keel, and carried 50 tons of freight.

STEERING INTO STELLA, one of the two ports on Amherst Island, below which David Tait, Sr., had his shipyard ninety years ago.

A CLOSE-UP OF STELLA ON A STILL AFTERNOON 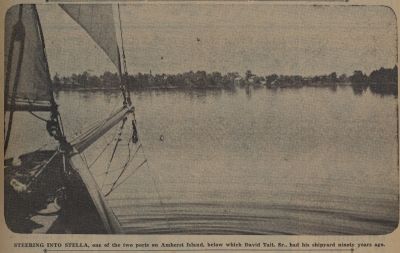