ASK from Cat Hollow to Kingston who built any of the hundreds of schooners once plying in that area and you will get the answer "Guess it was Jack Tait."

Chances are the answer will be right, although there were other good builders in the area—Beaupre, Thurston, Roney, Redmond, Dixon, and so on—and all the Tait vessels were not built by John. His father, David Tait, and his elder brother, David Gladstone Tait, built vessels before him. But John Tait did build a great many. He was a shipwright of tremendous energy, impressive personality and great resource. His activities extended into this century, and went beyond his native county of Prince Edward.

His daughter Annie, Mrs. F. W. White, is in Toronto, and her residence is 156 Glenholme avenue. Her mother, she well recalls, broke the christening bottle of wine on the bows of thirty-eight vessels of which her father was the master builder. He was much in demand and greatly respected by shipowners. They would pay as much as $9 a day for his supervisory services, which was a phenomenal figure when vessels could be built for $30 a ton measurement. But the highest compliment John Tait would accept was to have his wife chosen to sponsor one of his masterpieces. He built several vessels before he was married, and others at whose launching his wife could not attend. There may have been as many as a hundred altogether.

Mrs. White gives a pretty vignette of one of these launchings, that of the schooner C. Gearing, which her father built for George Hicks and Colin Gearing at Cooper's Wharf, in the corner of South Bay, Prince Edward County, in 1869. Her mother was so pretty, in grey and mauve, with a big picture hat, as she stood holding the be-ribboned bottle of wine, under the great arch of evergreens erected over the launching platform; all the countryside turned out, from Waupoos to Woodrous, and from Babylon and Christian street to Soup Harbor and Petticoat Point. Every launching was a frolic and a picnic, and Prince Edward County's schooners were as great an asset as Prince Edward's barley then, or Prince Edward's canneries and creameries to-day.

This very Gearing, a smart little schooner, of 9,000 bushels capacity was so much in demand that Captain Billy Lobb bought her three times before he actually got her. Captain Frank Duetta was her first master. She was painted white, with a blue-grey botttom and green trimmings, and could sail like a witch.

She came across from Oswego to South Bay one Sunday morning in four hours—forty-five miles if it's a foot, Yachting time. Steamboat time. The crew ate breakfast at 7 a.m in Oswego, N.Y., and the captain attended morning service in Milford, Ont., at 11 o'clock. She made six trips in nine days from Wellington, Ont., to Oswego, with cargoes of barley, and five more trips that same fall between Port Milford and Oswego. Barley freights were then 8 and 10 cents a bushel, and the Gearing earned $6,000 that one fall, so that she must have paid for herself in two seasons.

Colin Gearing and his friend, Donald Campbell, of Wellington, owned many vessels, separately or together. Campbell was reputed to be a millionaire, but died poor. He was ever open-handed, and his parting injunctions to his captains always ended with, "And remember, oysters for the boys." His vessels won many hats, with the first loads of the season into Oswego, and the hats cost Mr. Campbell plenty, usually $20 apiece, for they always required a wetting when the winning schooner came back to Wellington. The Gearing was, unfortunately burned at Trenton before she was very old.

Another of the many Tait vessels was the schooner Pacific, which he built at Roblins Mills, in Sophiasburg Township, in 1874, for C. S. Wilson and the Collier brothers. This Pacific was a very fine three master, painted white with a red bottom and green trim, and her first owners sold her immediately to Capt. James Ewart of Cobourg. Capt. Ewart loaded a cargo of bones in Chicago and carried it to Liverpool, for grinding into bone meal.

So careful was he of his brand-new vessel that he sheathed her inside with new pine lumber, lest her ceiling should be soiled by the bones and disqualify her for carrying grain later. When he got her to England he sold this sheathing for more than his whole freight on the bones and made a handsome profit. Then he got a charter to South America for the Pacific, and loaded there for New York. The schooner was lost at sea after that, some say on the coast of Newfoundland, when homeward bound for the lakes; some on the coast of Scotland, outward bound on another ocean voyage. A yellowed clipping from a Cobourg paper tells of the enthusiastic reception she had in 1874 when Capt. Ewart first brought her into his home port after her launching:

"Captain Ewart arrived in port on Saturday evening with his splendid new schooner, the Pacific, from Picton, and was accorded a hearty welcome by our citizens, upwards of a thousand of whom, accompanied by the silver band, had assembled on the pier to receive him and his fine new vessel. The Pacific is a full-sized canal vessel with a capacity of over 600 tons, or 24,000 bushels of grain; a three-master, and was built at Mr. D. S. Wilson's shipyard, Picton, under the superintendence of Mr. John Tait, who is considered one of the best shipbuilders in Canada. She is built of Prince Edward white oak, and is one of the best fastened vessels ever built in Ontario. Capt. Ewart has his son, Alex. Ewart, as mate, and the crew is composed of eight men all told. The total cost of the vessel is about $25,000, and she is jointly owned by Capt. Ewart, Mr. R. Mulholland, Mr. R. J. Winch and Mr. Geo. Gullet [Gillet], all townsmen. After having been made fast to the dock on arrival Saturday evening, the band was invited on board, together with the citizens present, and the capacious deck of the Pacific was soon filled with those anxious to congratulate the gallant captain. The band played several airs, the health of the captain and prosperity to his vessel were drunk in flowing bumpers, and after rousing cheers for the enterprising proprietors, the crowd quietly dispersed. The Pacific left here on Wednesday evening with a load of ore for Cleveland."

The clipping is inaccurate in saying that the Pacific was built in Picton. Roblin's Cove, where she first kissed the waves, is ten miles away from Picton, up the Long Reach of the Bay of Quinte. It is a lovely spot, one half of a huge bowl, opening to the east, just north of the mouth of ancient Hay Bay, scene of the first Loyalist settlement. Augustus Roblin, whose grandfather occupied the farmstead and built the mills at the cove, still farms here and occupies the fine stone house on the brow of the high bank. His ancestors were among the first of the Hay Bay settlers in the Adolphustown area. Roblin's Cove rang with business sixty years ago; schooners were ranged there, getting built or getting launched, or loading shingles, lumber, timber, grain and flour. Farmers teamed their harvests to the mill or down the steep road to the schooners' holds. In winter they would be skidding down big timbers for the shipbuilding or the rafts. Raftsmen formed their "droms" [drams] here for towing to Quebec, and shipwrights worked all the year round, but especially in winter, on the long ways from which the Pacific and seven other schooners were launched. Roblin's Cove or Roblin's Mills, as the place was equally named, had a fluctuating population of two hundred souls.

All that is changed now. Augustus Roblin, in his beautiful stone house with its spacious rooms hung with old-fashioned lithographs of flowers and belles, is the only "permanent inhabitant." A few campers and cottagers give his family company in summer. Of the two mills, one, for lumber and the other for flour only slight traces remain. The stream which once brawled furiously down the two-hundred-foot gorge after turning the wheels of the grist mill above, has dried up. The mill-pond on the high plateau forming the Roblin farm has vanished. Only the old millstones remain at the top of the bank, Down below, the ruined walls of one building, and the shell of the old general store, built of stone and stocked literally with everything from a needle to an anchor, are all that tell that the silent cove once hummed like a hive; these, and the remains of a wharf.

The vessels built in Roblin's Cove were these:

Bay Ranger, a scow for the Quinte grain trade, built by John Tait for Levi Roblin, her master and owner.

New Dominion, built by Robt. Youmans for C. S. Wilson in 1867, and sailed by Capt. Ryan Mouck. This was one of four New Dominions launched in the first year of Confederation, when the Dominion of Canada was brand new.

Bermuda, built by John Tait for C. S. Wilson and the Collier Bros., in 1868. Capt. Abner Hicks was her first master, and the story of her loss at Port Granby was recently recounted in Schooner Days.

Starling, built for Wilson and Colliers by John Tait and sold on the stocks for the Georgian Bay trade, in 1873. She was burned here in Toronto in 1895.

Cataract, two-masted schooner, built by John Tait for Wilson and Colliers in 1874, and sailed by Capt. Jake Collett, with George O'Brien as mate.

St. Clair, built by John Tait for Wilson and Colliers in 1875, and first sailed by Capt. Ed. Vandusen.

The steam barge Niagara was also built, or rebuilt and lengthened by John Tait for Capt. Wilson and the Collier brothers, in 1873, and was taken to Georgian Bay by Capt. Finlay Macpherson. The place of her building is given both as Roblin's Cove and Picton. She was lost with all hands (sixteen) off Long Point, on the night of Dec. 5th, 1899.

Other vessels which John Tait built will be mentioned next week.

Walter Jones, of Long Branch, writes to ask if the arrangement of the peak halliard on the mizzenmast of a clipper model of 1850 which he is making is correct. It is, Walter, and being nineteen and a shut-in let me compliment you on your interest in "Wing and Wing" and other sailing features. We shall have more of them all, please God.

Hugh McKanday, whose motto is "Ne Obliviscaris," wants a picture of the old Alexandria, wrecked off the Highlands in 1915, and would like to know who got her bell? If any reader can oblige the aforesaid Hugh it will be a worthy work. Much of the ironwork of the old steamer is still visible on the Scarboro shoreline. Mr. McKanday's motto is recalled, and his wants are thus made known, in the hope that he will not be oblivious of the fact that a St. Lawrence dividend awaits him at the place where Schooner Days come from.

ROBLIN'S COVE, on the Bay of Quinte, last summer. The little square stone store, above the old wharf, is all that remains of the bustling port where seven staunch schooners left the ways when John Tait gave the launching order. 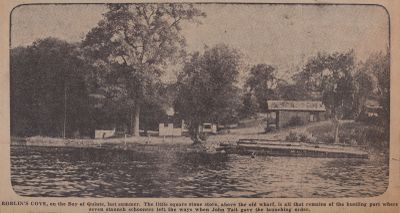