WE promised, last week, a little to see the showers of sparks fly high more in the way of information regarding the picture of the sinking steamer Schlesinger.

Never wrecked, often a rescuer, Capt. James McCannel has had a career lucky for himself and lucky for others.

This pictures call it to mind. At half past two in the morning of May 22nd, 1918, receiving distress signals from the huge wooden steamer Ferdinand Schlesinger, the largest vessel ever built on the lakes from planks, he ran the Assiniboia alongside and picked up two lifeboats which had left the Schlesinger with all her crew, She had about 3,000 tons of coal in her, only a part load, and was full of water, even to the firehold. Capt. McCannel hooked the lifeboats on to the Assiniboia's davits, hoisted them up, made sure every man was accounted for, and stood by till daylight, when the Schlesinger dived below the surface of Lake Superior. The picture was taken just before she plunged.

Many a time Capt. McCannel has passed through deep-water wreckage which marked the end of some gallant ship. There was the Ellen Williams, a fine three-masted schooner out of Chicago, whose spars, sails and deck-gear cluttered the waves for two acres as he ploughed through in the steamer Hesper one stormy morning off Poverty Passage, not far from Death's Door, in Lake Michigan in 1895. When he was second mate of the steamer Hesper, in July, 1901, he took part in the rescue of four men from a water-logged gasoline yacht in distress off Pelee Island, and took them into Toledo. This summer, in command of the Assiniboia for his 24th season, he picked up a large power yacht off Thunder Cape, broken down, with seven American citizens aboard, and towed them into Port Arthur after the after the fastest passage their craft ever made. The Assiniboia has lots of power and the fifty-two-foot launch astern of her towed like a dinghy. The rescued included a United States judge and an American colonel of artillery and an American newspaper proprietor.

"My first experience was going to the rescue of the crew of the steam barge Oscar T. Townsend, coal laden, off Sanilac, in Lake Michigan, in the fall of 1891, when I was a wheelsman in the steamer Hudson. We were called at 2 a.m. on a stormy night to get boats ready. A few miles away was the burning ship. It was a wild sight as the vessel rolled to windward to see the showers of sparks fly in the air. We circled several times but could find no trace of the crew. They escaped in the boats and picked up another vessel.

"A couple of months later, in the Hudson, we came up to one of the vessels towed by the steamer Oswegatchie and stood by while the Lehigh Valley steamer Cayuga took the crew off. The woman cook, lashed in the rigging, held her season's savings, a wad of bills, in her fist until her fingers were so numb she couldn't open her hand. 'Let the vessel go to that nice warm place,' said she. 'I'm all right and I've saved my pay.' The steamer and barges were all lost.

"We were in the vicinity the night the Wm. H. Gilcher foundered with all on board, also the schooner Ostrich. We could not have been far away, when I was in the Athabasca, the night the new steamer Cypress foundered on Superior, in the fall of 1907.

"I saw the canal-sized schooner John Wesley when she rolled nearly over off Point aux Barques in 1892. It was a wild morning. There was no one on board when we passed."

This, as confessed at the top, is a clean-up after Christmas, concerned with several matters which have been hanging fire. It is the last of Schooner Days for this year, the 272nd since the series began, but there are many more shots in the locker, and, please God, we shall have plenty in 1937.

Thanks, friends, from Superior to Champlain, for your Christmas cards and great helpfulness and good wishes; may the New Year be as good to you as you have been to Schooner Days in the old year. And don't sniff at Champlain, for while it is not one of the Great Lakes, it had its schooners—and square-riggers, too—and we'll have a story from it soon that may interest you as much as the others.

But we shall not let the old year close without doing justice to a good little schooner town that is one of the gems of the St. Lawrence. A recent picture of the schooner Picton was incorrectly captioned. It was a pretty picture, with leafy boughs in the foreground, and a stone building behind framing the Prince Edward County schooner at anchor. The inscription, as several readers, including Mr. W. J. Wilson, manager of the Gananoque Publicity and Tourist Bureau, were quick to advise, should have said that this was the Picton lying in Gananoque, for that is where the photograph was taken, possibly during Capt. Frank McMaster's command of the vessel.

The Picton was built in Picton, and was owned there, but was probably sold to Port Hope early in her career, for that is where she was registered. She often traded down the river as far as Gananoque, as did the Vienna and The Briton, as the S. & J. Collier was re-named, and in later days the Horace Taber, under Capt. Frank Barnhart. The stone building shown in the picture was the Skinner Company, Limited's factory. They were well-known manufacturers in Gananoque for many years.

Sir—As an interested reader of "Schooner Days," and others of your articles on ships and shipping, I am taking this opportunity of expressing my appreciation for many enjoyable hours' reading of reminiscences from your pen, and at the same time of extending to you best wishes for Christmas and the New Year.

Having read certain of your remarks on marine art, and marine artists, I am sending this card with some trepidation, hoping, however, that you will find my drawing (which, by the way, is original) fairly accurate technically. Being quite young, I have not the intimate knowledge of sail possessed by those living in the days before steam became so supreme on the high seas. However, as an aspirant marine artist,

I have tried to acquaint myself with as much information on ships generally, as possible.

I should appreciate an opportunity of meeting you personally at some time in the future when it would be convenient.

With every good wish for the future, I am,

Thanks, Alan. Your drawing is s fine piece of pen-an-ink work— from a Montague Dawson painting, isn't it? It catches the spirit of the original splendidly and is correct technically, although I doubt if the jibs of a square-rigger ever quite took that particular curl. I know that is the way they are shown in the painting, and you have reproduced them faithfully. In actual life they would hardly be so symmetrical, with the ship rolling so hard in a following wind and sea.

CLOSEHAULED FOR CHRISTMAS—To make Chicago Creek about the third week in December, with the deck and hold crammed with Christmas trees from the shores of Lake Michigan, was the "last trip" ambition of many a Scandinavian skipper fifty years ago, or even as lately as twenty years ago, when there were still schooners trading to Chicago — mostly sailed by Finns, Swedes and Norwegians. They used to lie at the Twelfth street bridge, with the trees triced up in their rigging, or even to the trucks, with the signal halliards, advertising their wares. Mr. Loudon G. Wilson, of Royal Oak, Mich., has made happy use of the vanished trade in his Christmas card, which shows a fine smart three-'n'-after, such as the Scans sailed, coming home in winter rig with a full cargo of evergreens.

THE HUDSON AND THE HARLEM, sister steamers of the New York Central and Hudson River line, traded between Buffalo and the head of the lakes. Capt. McCannel was in both of them, particularly the Hudson. They were schooner rigged, with standing gaffs and four working sails. After he left the Hudson she was lost with all on board off Eagle River, Lake Superior, when commanded by Capt. Angus Macdonald. He had risen to his post from the humble commencement as horseboy in the schooner Fanny Campbell when she was in the square timber trade.

The large schooner on the right is the Ellen R. Williams, which disappeared in Lake Michigan, leaving two acres of floating wreckage. The other schooner is the John Mee. Both traded into Collingwood in the old days. The photograph was taken in Chicago. 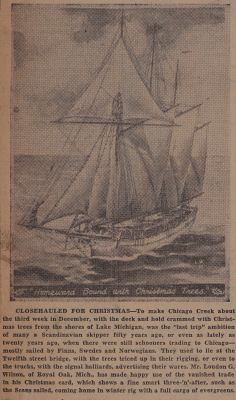