NO one can recognize, in the modern motor city a couple of miles inland, and the modern concrete-walled harbor on the lake shore, forty miles east of Toronto, old Port Oshawa of schooner days.

Yet the whole transformation has been effected since the schooner disappeared. That was only in the second decade of the present century, and we have yet to complete the fourth.

The last schooner into Oshawa—or, pretty nearly into Oshawa!—was the stonehooker Helen, wrecked there in 1922.

The last schooner episode connected with Oshawa in which I had any part was a year ago, when Gordon Conant, K.C., County Crown Attorney, dragged the bones of the old Caledonia from their resting place for half a century off Bluff Point. Her chains, anchors, keelson, keel and stem decorate his lawn on Simcoe street.

The previous episode in which I had figured at Oshawa was thirty years before, when the three-masted schooner Oliver Mowat, was ashore close to the same spot. She was got off, by good luck and good management, after her crew had to be taken off by volunteer lifesavers.

The Oshawa of that time, 1905, was as unlike the Oshawa of to-day as a McLaughlin-Buick 1937 is unlike a 1905 Whatsit. But that Oshawa of 1905 was very much like the Oshawa of 1845. The principal difference was that the cluster of stores and houses on the Kingston road was still called Skea's Corners in 1845, and the port, two miles south, was sketchily known as Sydenham Harbor.

Debate had waxed furious as to whether Skea's Corners should foe officially designated Sydenham or not, when Edward Skea got his postmaster's license for his black-and- white chequered store in 1842. The Sydenham Harbor Company had already been formed with James Wood as harbormaster. Mr. Wood is spoken of also as the first president. There was no real harbor, just a wharf and shipyard in the bay between, Bluff Point on the east and what is now Guy's Head to the west. They Sydenhamites were strong, for the popularity of the first Governor-General of the two Canadas was great in the district; but Moody Farewell brought in two Indians from back Scugog way to the meeting, and put it up to them what the name of the place should be. The Indian trade was quite important at this time, the place being a centre for the Chippewas, who haunted Rice Lake and Lake Scugog.

"Where stream is crossed," was the answer. There was an Indian ford over the stream (then much larger) which the settlers had called Salmon River, and which now meanders through marsh under the name of Oshawa Creek.

So, as a compromise between Skea's Corners and Sydenham, Oshawa was chosen as the name for the new post office. Skea's Corners clung to the Kingston road settlement for a few years, and the port was known as Sydenham Harbor in the Canada Directory of 1857. But Poulett Thompson, Lord Sydenham of Kent and Toronto, Governor-General of the united provinces of Upper and Lower Canada, was dead, and his name no longer carried the distinction that it did; other Sydenhams had sprung up in the country.

Sydenham Harbor quietly became Port Oshawa, and the company which operated it the Oshawa Harbor Co., with James O. Guy, who had been Harbormaster Wood's clerk, as secretary and harbormaster. Mr. Guy was later one of the principal grain shippers and vessel owners on the north shore. His brother Thomas' farm, on Guy's Point, now a pleasure park and cottage subdivision, was known as Sydenham Farm. Their old home 'is still standing, buried among summer cottages.

How the harbormaster's shoes, which he filled so ably, became empty is grim reading. Harbor-master Wood had a house and barn on the rising ground just east of the present new concrete harbor, below the old cemetery whose spruces and poplars have long been a lake shore landmark. This is now Reeve Gifford's farm, and the old Wood orchard is still traceable.

The year 1849 was one of the plague years in Canada. Cholera and shipfever slew their thousands, especially among the immigrants who were coming to Canada West or "Canada in the bush," as Ontario was then called. One night an old-style walking-beamed twin-funneled woodburning steamer, either the Niagara or the Newcastle, clanked in to Oshawa pier, hurriedly piled out a shapeless heap of cargo on the wharf, and steamed away without even refueling. Harbormaster Wood, hurrying down from his house, with a lantern to guide his steps, found fourteen men, women and children dead or dying on the wharf planking. They had been stricken on their passage to Niagara from Montreal, and the steamer captain had thrust them ashore.

By morning all fourteen were corpses, unfriended and unknown. Elder Thomas Henry of the Christian Church Conference, president of the Sydenham Harbor Company, and his pious harbormaster, did all that remained to be done for them. They buried them in one large grave in the southwest corner of the ancient hilltop cemetery, a section set apart as the Potter's Field. Poor Irish folk, possibly all Roman Catholics, they found nothing but a grave in what they would consider un-consecrated soil, in this land of promise. But the soil was consecrated by true Christian charity, and the consecration was sealed with the body of one who buried them. For that night James Wood was stricken with the plague and died. He sleeps in the same cemetery where he provided a resting place for the strangers.

Mr. Wood was not Oshawa's first harbormaster. The "apostolic succession" of masters of the port has been:

We shall have more about Port Oshawa next week.

You were short-changed the other day in the description of the Continental gondola Philadelphia, recently recovered from Lake Champlain after one hundred and fifty-nine years' submersion. She was, it may be recalled, one of Benedict Arnold's fleet, and went down fighting in 1776, in the Battle of Valcour Island, a British 24-pounder giving her the coup-de-grace at the moment when her 12-pounder bow-chaser was being fired.

The Philadelphia's own midship guns, a pair of 9-pounders mounted on opposite sides, had locked their carriages in their recoil, like a pair of mules kicking each other to death. She had tried to work an improvised swivel gun from her port quarter-rail. It had been too heavy for its iron crotch and had sprung from it when fired, breaking off one half of the crotch and throwing itself half way across the quarterdeck. It fell on the tiller and probably disabled the helmsmen and the ship's steering. The barrel of this gun was about three feet long.

It was too heavy for proper use as a swivel, and looked to be an old-fashioned 4-pounder carriage gun dismounted and pressed into service.

The Philadelphia had gone into action under sails and sweeps. The sails had rotted away after being torn by British broadsides, and most of the sweeps had floated off as she went down, but some had been caught in the sinking hull, and were to be seen. The wooden tholepins through which they worked remained in their places along the gunwale. The 36 foot mast, clamped to an 8 by 12 thwartship beam by an iron strap, remained upright when she sank, and had so stood for one hundred and fifty-nine years. It had wasted away until it looked like a rough-trimmed tree-trunk, but careful examination of the knots with which it bristled showed the surface of each knot flat and true as when the spar was first smoothed with a dubbing-plane. It was the surrounding wood which had decayed. The yards of the mainsail and topsail looked like the mast, rough as a nutmeg-grater, and for the same reason.

The Philadelphia went down very suddenly in deep water, and all aboard of her, except those of her crew who, could swim, went down with her. That, was why, when raised, as she was in 1935, she preserved so well the appearance of a ship in the midst of battle. The simple "domestic details" were just as they had been that October morning in 1776; the big black cook pot and long-handled frying pan and the cook's chopping block stood in their places around the brick-lined hearth where was served out the last breakfast some of these lads ever tasted. The spoons and ladies were where they had laid them down when the muster-drum beat to quarters. Even the wood for the galley fire was there, with the ax -marks and the bark still on it. It had been swept under the platform for the forward gun as the Philadelphia sank.

The pictures opposite have nothing to do with either Oshawa or the Philadelphia, but are a reproduction of a series treasured by an Oakville contributor to Schooner Days, whose interesting comments on the Ceres and other Old Country craft appeared last week.

I. BARQUE KISHON OF APPLEDORE, DRIVEN ASHORE AT HIGH WATER.

II. POUNDS ON THE IRON-FANGED ROCKS WHILE THE TIDE ROARS.

III. TILL HER MASTS BEGIN TO TOTTER AND THE FOREMAST FALLS.

IV. THE MAINMAST GOES NEXT

V. AND SHE IS A COMPLETE WRECK. 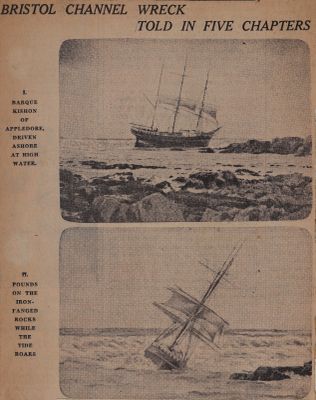 4. Mainmast goes and 5. A complete wreck
Groups of Related Records