ANYONE who has walked the shore in the vicinity of Oshawa, as we had to do, rod by rod and mile by mile, when stonehookers searched for sand, gravel, hardheads and pavers, must have been struck by the curious succession of marshes, some of great area, which separate the high farm lands of Ontario County from the beach of the lake in this locality.

In the early days, when the lake level or the whole water-table was higher, these marshes were large ponds, deep enough to provide natural harbors for the small craft of the time and with outlets which admitted them. The drawback to them was the tendency of old Ontario to block with sand and gravel the entrances to them from the lake itself. There was always the danger that craft sheltering in these ponds or lakelets fringing the main lake would find themselves so bar-bound, after a big blow from the east or the west, that they could never get out. The pounding of the lake seas would have piled so much sand and gravel across the outlets that men and teams working for weeks could not cut a channel sufficiently deep where the vessels had sailed through easily before the gale. It might be years before water accumulating inside would scour out another entrance.

Vessels have been sanded in in similar natural harbors on the south shore of Lake Ontario. There are no records on file of this happening in the Oshawa ponds, but they have all become permanently bar-bound and filled up with waterlilies, bulrushes, wild rice and cranberry bushes, so that they are hardly navigable for a canoe, and even a canoe cannot enter them from the lake.

Many are the legends attached to these marshes. A mile or two west of the present harbor is Stone's Cove and Roger's Beach, with a marsh and creek inside the sand-beach, both now almost dry. Gordon Conant, K.C., Crown Attorney for Ontario County, has a story of this, which is worth running down. At the time of the War of 1812, Roger's marsh was a well developed shore-pond, with an entrance into it from the lake, kept clear by the brimming waters of the creek which flowed through. During the war a cutter or sloop in the British naval service, was transferring the military pay-chest from Kingston to York or the head of the lake, where a post was maintained at Burlington Heights. She was sighted and pursued by two American vessels, and, being unable to fight them, stood in for the shore, above the headland since called Guy's Point, a prominent landmark not far west of the harbor. It is, indeed, the site of Bonnybrae, Mr. Conant's summer home. She had on board a pilot who knew the north shore well, and he popped her into this cut through the sand. She went as far up the creek as she could—which wasn't very far—and when she took the ground her crew landed the chest and buried it.

Either the Americans followed this vessel in and, finding her abandoned, burned her or scuttled her, or her own crew saved them the trouble by doing it themselves. Or perhaps a lake gale silted up the entrance before she could be got out, when the danger had passed. At any rate, her bones are said to be in the marsh to this day. Mr. Conant has been successful in recovering the anchors, and all that is left of the schooner Caledonia, wrecked fifty years ago to the east of Oshawa harbor. May further success attend his efforts at finding the ancient pay ship to the west.

I have often wondered whether the following letter from Capt. Loring, aide to General Sheaffe in command at York, to Noah Freer, military secretary to the Governor-General, sheds any light on the legend:

"Sir Roger (Sheaffe) desires me to say that he is exceedingly anxious for a supply of money, according to his requisition lately transmitted, the balance of the £37,000 lately received not being sufficient to pay the militia.

"I am further ordered to inform you that Sir Roger has thought it advisable to purchase a small sloop at this place, called the Mary Ann, for 200 Hal. Currency, as she can be employed with much benefit to the service as a transport."

This was written on the 19th of April. Was the Mary Ann, possibly more convenient because of her small size, sent east with the letter for more money? Did she get it at Kingston? And was she chased by the vanguard of Commodore Chauncey's fleet, which sailed from Sacket's Harbor that week and arrived off York on April 27th? And did she pop into Roger's marsh to dodge them, and bury the army pay-chest then and there?

Chauncey's fleet, with Dearborn's army on board, captured old Fort York and this town of Toronto on April 27th, 1813. The invaders searched diligently for the treasury when they looted York. The Receiver-General's iron chest had been carried by William Roe, a trusted employee, to the house of Donald Maclean, Clerk of the House of Assembly. Mr. Maclean, who bore an officer's commission, like the present holder of his office, Major Alec Lewis, was killed in the battle which raged through the slopes of what is now South Parkdale. His house was broken into and the strong box was plundered.

Dr. Scadding's history says that about $1,000 in silver was secured from it, but that William Roe had taken three bags of gold and a large quantity of army bills to a spot on "the Kingston road, east of the Don "bridge"—shall we say King street near Broadview avenue?—and there buried them. The Americans made a thorough search, and their boats rowed up the Don River, hunting for British treasure. They found the army bills, which would be of no use to them, but Mr. Roe, says Dr. Scadding, delivered the three bags of gold to Dr. Strachan in his parlor, after the invaders sailed away.

The sum of gold may not have been a large one, for Dr. Scadding does not mention the figure, but is particular about the thousand dollars in silver, which was, apparently all that was left of monetary value in the Receiver-General's chest. So it would seem that the Imbalance of £37,000," in itself a large fortune for the time, had not reached York before the invaders sailed around Gibraltar Point.

The Mary Ann may have vanished with it into Roger's Marsh. She seems to have disappeared from official record at this date. But it is only fair to Mr. Conant and to all possible treasure searchers to add that Commodore Chauncey reported the capture of a fleet of five transports off the Ducks in October of this same year, and gave the name of one of them as the Mary Ann. It has never been an uncommon name for sailing vessels; but if Chauncey's capture was the sloop Mary Ann which General Sheaffe bought just before York fell, she could not have been the vessel left to moulder in marsh west of Oshawa.

A story similar in outline, pay-chest and all, is told regarding Irondequoit Bay on the south side of Lake Ontario near Rochester. This bay is larger than Toronto harbor, and is bar-bound. Somewhere among its marshes the remains of a British payship are supposed to lie concealed. In this legend the vessel is said to have carried "twenty thousand pounds (sterling?) in silver."

That the buried treasure story should be a sort of heirloom in the Conant family is appropriate. When their ancestor, Roger Conant, came to Darlington with other United Empire Loyalists in 1792, the care and disposal of specie in the absence of banks was one of his worries. His great grandson, Thomas Conant, tells in his interesting "Life in Canada" and "Upper Canada Sketches," that old Roger, who left behind him a 13,000-acre estate in New England, brought £5,000 in British gold with him, and could find no employment for it until he went into the fur trade. When he died in 1821 he was wealthy, both in lands, goods and money—but his gold could not be found. In the war of 1812 he hid $16,000 in gold and silver coins in a knot hole in the log wall of his brother-in-law, Levi Annis' home, in Scarboro. Three years later, when the war was over, Levi gave him back the $16,000 intact. Some days before his death a large iron bake-kettle disappeared from the fireplace of the family home in Darlington Township. It was never seen again, although searched for with divining rods, witchhazel twigs and magnets. It was believed that the old man had used it to bury his gold in, on the bank of the salmon stream which ran through his eight hundred acres.

Roger Conant’s house was near the lake, and the troops passed his farm as they marched up the Kingston road or along the lake beach. He was often routed out at midnight with a pounding on the door, and "Open in the King’s name!" They would demand his oxen to help drag another cannon up to York, thirty-five miles away. They needed one yoke of oxen for the small guns, 6 or 9 pounders, and two teams or more for the bigger ones, and they paid well, in gold. On one trip to York the commissary officer not only gave him a handful of guineas for his own and the oxen's labor but bought the span outright for another £14, Halifax currency— $64. The bovines became garrison beef.

"Sometimes," writes Thomas Conant, "oxen were impressed to draw specie to Toronto, and the old men used to say that they would by far rather draw the cannon than the specie. While drawing the latter, which was in boxes about a foot square, the guards were very strict, and would not allow much rest for the driver or the oxen. Like the story of Capt. Kidd's buried treasure, there have been stories told of a box of this specie being hidden while on the way by the officer in command. It has been a rumor current among old1812 men that a box of specie was placed in one of the gullies near the lake shore on Scarboro Heights. From all that can be gathered, it would appear true that some specie was deposited there."

But if you see an iron box sticking out of the cliff here and there near the Scarboro waterworks, do, not dream your fortune is made. It will, more than likely, prove to be a worn out safe dumped over the bank to prevent erosion.

"Cash money," as they called the old coins, was heavy and bulky. The £37,000 mentioned would run to six hundred pounds avoirdupois if it was in gold sovereigns. If the sum were in the Mexican dollars of milled silver, in general used in Canada at the time, it would weigh between five and six tons. Half a dozen ox teams would be required to haul the wagon loads of it. The boxes mentioned by Mr. Conant probably contained $1,000 apiece.

We shall have more of Oshawa's buried treasures from schooner times next week.

AND AS THE MODERN HARBOR APPEARED LAST SUMMER, GAY WITH YACHTS AND CROWDED WITH COAL CARGOES 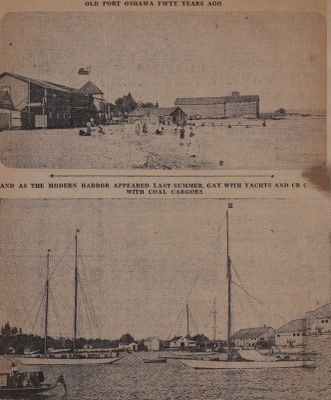