TALES of buried treasure haunt many of the older Ontario communities, and the missing paychest of 1812, mentioned three weeks ago, is not by any means Oshawa's sole contribution.

Needham Goodman, who combined the offices of longshoreman, ventriloquist, clairvoyant and dowser or water-diviner in Oshawa sixty years since, was supporting the post of his own garden gate when a stranger with an American cast of speech paused, passed the time of day, and asked if he, being by his looks an intelligent man and a resident for some time, had ever heard tell of treasure being buried in these parts.

Well, Needham said, there always were stories about pots of gold being hidden here and there in times of trouble, and by misers, and there was the yarn about the old army paychest in the marsh, but he himself didn't take much stock in them.

"Come along for a walk," saids the stranger, and they went together along the old mill road to Sandy Small's mill, to the westward. They passed the mill and the pond, the one long since torn down and the other long since dried up, and came to Dunbar's Hill.

"What's that you have in the handkerchief?" asked Needham,

"Oh, that?" said the stranger. "That's an instrument that tells you when you are in the vicinity of minerals under ground."

"Like a divining rod for water?" quoth Needham, as one expert to another.

They climbed the fence and walked about until Needham became hungry and spoke of supper time.

"This thing," said the stranger, "gives strong indications of metal of some kind being under the ground here. Could you find me a shovel, do you think, and would you come back with me to-night when all is still and see what there is that gives these indications?"

"Sure," said Needham. "I'll get my shovel ready and turn in early, and you throw a pebble on the roof when you're ready, after everybody's gone to bed, and I'll slip out and be with you for whatever the night will give us."

"Good man," said the stranger, and they walked back to the old village at the port together. The stranger went to one of the port hostelries.

Needham lay awake all night listening for the pebble, but none fell on his roof. In the morning he got up to put away the shovel he had laid out. The shovel was gone. He hurried to Dunbar's Hill, and there found his tool beside a heap of fresh-turned earth and a hole in the hillside. There was also a large flat stone, which seemed to have been newly exposed to the open air, and one side of it was ringed in a large circle, as though it had served as the lid for a pot or kettle for a long time.

Needham told his neighbors, among them James O. Guy, the harbormaster. Edward J. Guy, of Havelock street, Toronto, son of the harbormaster, a little boy at the time—1878 or 1879—well remembers the excitement and the drive out with his father and Needham Goodman to Dunbar's Hill, to examine the ground. The hole was there, and the bottom was round, as though it had been molded so by a pot, and there were marks of the pot having been lifted out.

Nothing was ever heard of the stranger afterwards. Mr. Guy's belief is that there really was money buried in the hill; that probably during the American Civil War refugees from the south or northerners who despaired of their property had landed on the Canadian shore and buried their gold. Now that the war was over and their country was beginning to recover they were withdrawing their money from the improvised bank, a sand bank at Oshawa proving more secure than many banks in their own country.

Spanish milled dollars and Mexican dollars were general currency in Canada at the time of the War of 1812, and it is possible that a hoard of these had been buried in Dunbar's Hill much earlier than the American Civil War. The Mexican dollars were not milled on the edges and so could be clipped or filed, and they were so pure in silver that they were worth more than their face value in the early days. Thomas Conant, of Oshawa, in his interesting "Life in Canada," tells how New England counterfeiters came over after the War of 1812 and set up their "mints" in the dense woods of Lower Canada, making Mexican dollars so very nearly like the genuine ones that they passed unquestioned. One of the Montreal banks accepted $4,000 of "the queer." The gang lived in squalid luxury, tossing a silver dollar into the spittoon whenever they wanted it cleaned. American paymasters used to cross the boundary to buy counterfeit dollars in Canada, and reaped a neat profit. After the close of the American war the counterfeiters moved into Upper Canada and turned their wicked hands to making greenbacks.

The gang was eventually broken up, but for years afterwards slick strangers used to visit the Oshawa vicinity on the hunt for left-over counterfeit coins. Their password was, "Can you tell me where I can buy shingles?"—an innocent question in the days when Ontario County was pouring its forest wealth into j the United States. The first dozen people questioned might direct the strangers to So-and-so's mill or Such-and-such's bush, but eventually they would find some one who would wink and describe some shack buried in the woods where some old trapper had a heap of "shingles," and thither they would repair, and dicker with him for counterfeit coins at ten, twenty or even forty cents on the dollar.

Perhaps it was a "shingle pile" that Needham Goodman all unwittingly left the stranger to remove while he waited for the pebble.

THE GUY HOMESTEAD, still standing, although concealed among summer cottages, as it used to be in its orchard and ornamental grounds at Port Oshawa. 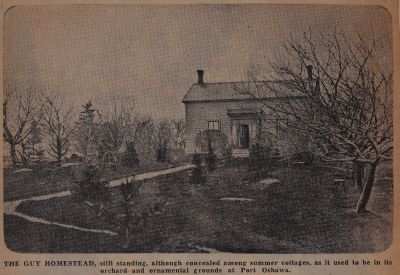