Media Type
Image
Item Type
Stereographs
Description
Stereoview of Buffalo harbour and the western terminus of the Erie Canal. A wide array of barrels is various conditions dominates the foreground. Wooden and steel lakers stand by the grain elevators. A boom loads barrels into an Erie canal barge.
Inscriptions

This is a scene in a busy part of a busy city. Here the Erie Canal ends in Lake Erie at Buffalo. You can see by the barrels on the wharves, by the derricks, by the great storehouses, and the large river steamers, what an important commercial center Buffalo is. The population of this city in 1915 was 454,630. According to the census of 1910, it was the 10th city in size in the United States. It ranked, in the same year, 9th in the value of its manufactured products.

The city is located at the right place to command a heavy trade. It is the natural eastern terminus of the lake traffic. The city lies on the northern edge of the great natural gas and oil regions, and near enough to the great coal and iron districts of Pennsylvania to comptete with Philadelphia and New York. The Erie Canal links Buffalo with the important cities of central New York, and gives it a direct water connection with the City of New York. Moreover, the Niagara Falls have been harnessed so that they furnish electric power to run great industries in Buffalo.

The combined results of all these factors is a great commercial and industrial city. It is a market for live stock, fish and lumber. It has naerly 2000 manufacturing plants, including such industries as meat packing, machine shops, flouring mills, automobile factories, copper smelters, and refineries. Pittsburgh alone ranks ahead of it in the iron and steel industry.

The city has 17 railroads which run some 250 passenger trains daily. It is on the main transportation line between Boston, New York, and Chicago, and other important cities both in the East and the West.

Why is Buffalo a great commercial center?

Copyright by The Keysone View Company." 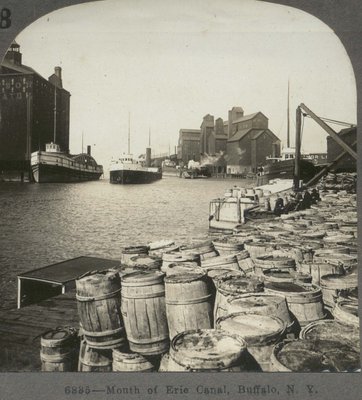