"We hear a great deal of the Suez Canal and of the Panama Canal, but there is a canal in the United States that handles more traffic than either. The Great Lakes in the United States furnish the most remarkable inland waterway in the world. To make this waterway navigable all the way from Duluth, Minnesota, to Buffalo, New York, it was necessary to do several things. The river connecting Lakes Erie and Huron had to be deepened and the connection between Lakes Huron and Superior had to be negotiated in some manner.

In order to get boats through from Lake Superior to Lake Huron a canal had to be built around the rapids of St. Mary's River. This is called the Sault Ste. Marie or the St. Mary's Falls Ship Canal, popularly called the "Soo Canal." More tonnage passes through it yearly than through any canal in the world. This canal is 1 1/2 miles long and deep enough to carry the largest lake boats. One of the locks alone is 1,350 feet long and will carry boats that draw 24 1/2 feet of water.

Boats laden with iron ore from Superior, grain from Duluth, or coal from the Pittsburgh district all pass through this waterway. The odd looking freighter entering Lake Huron is well adapted to carrying ore or coal on the lakes. It is like a huge iron box with a flat bottom. There is a little house at each end. In one the crew lives. In the other is the machinery. Some of these boats carry 10,000 tons of freight at one time. In 1939 more that 69,850,000 tons of freight went through the canal. The value of this tonnage was estimated to be about $1,012,829,000." 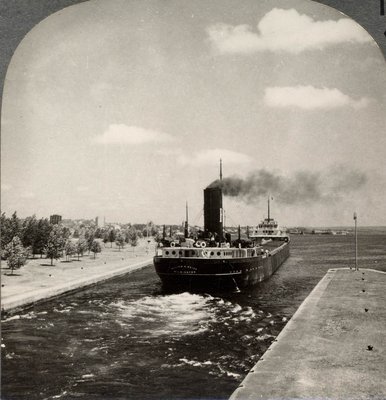