Capt. , head of the , and Capt. , master mariner, jointly owned the white schooner in . They had a problem on their gnarled and knotted hands.

In the last days of 1889 there was a glut of grain for export. It all couldn't be got out before the freeze-up. Saunders and Donnelly were offered a charter of 4 cents a bushel for a schooner load of barley from Kingston to .

That was only a daylight run, even on the shortest day of the year, with a fair wind, and the Murton was a stepper that could carry 17,000 bushels. The $680 frieght offered was more than the Murton had netted for the whole season's work. It was good wages for a captain for a year, in those hungry '80s.

Capt. Saunders appealed to Capt., of the schooner , one of the winter-berthed fleet.

"Gimme your charter," said Capt. Joe, "and I'll fit the Queen out again and deliver the barley, if you'll make it worth my while."

This, however, was paying something for not getting $680.

"I don't mind saying I'd have more confidence in you taking the Murton out than if I did it myself," said Captain John. "You go as master in her, and we'll pay you well, and I'll go as mate. What d'ye say?"

They did have to wait until the New Year had run 18 days before Joe got the wind that satisfied him. That morning, bitter cold, with the late rising sun low in the sky, they cast off the Murton's frozen mooring lines and mastheaded her two lower sails and four jibs to a gentle wind from the northwest.

Southerly breezes had held her windbound since the bargain, and the jabble of sea they kept up had prevented the harbor from freezing. But all the islands in Kingston harbor were rimmed with ice and white with snow.

The tinkle and crackle of skim ice, broken atop the smooth harbor water, was replaced by the deep diapason of the roaring bow-wave, mounting up to the level of the "horsepipes", as she drew clear of the shelter of the land. It spurted in through those eyeholes and the scuppers, and made little rivers along the deck, and began spitting and splashing over the weather rail.

All the halliard coils and other gear was iced up as high, and half-barrels of rock salt were lashed under the pinracks.

"Keep that salt flying!" was Capt. Parsons' standing order, and every splash that came aboard was "salted" to keep ice from forming.

Before they had passed the and , it began to snow, and it was really blowing hard.

There was no turning back.

DECK LOAD OF THE BEAUTIFUL

It snowed so hard that the deck began to drift with it. The crew of four men -- at $2.50 a day, "extravagant" wages for 1889 -- battled the snow with brooms and shovels. They were helped and hindered by the seas now running high in the open lake.

When the Murton would roll to windward, and one of those grey-beards poured aboard, a snowbank as big as a yawlboat would launch itself to leaward as she rolled back. Some of it would go overboard, some of it, as frozen slush, would choke the scuppers. With the splashing and the rolling and snow-showers, the deck was filled with frozen slush eight inches deep. Neither salt nor brooms nor shovels could get rid of it.

Every rope, ring, block and spar was coated. Snow piled in drifts in the belly of the mainsail. The reef-points, lengths of half-inch rope that look like little strings when the sail is set, became blobs of ice as thick as your arm. Frozen spray iced the sails as hard as hollowed granite, as high as the highest reef-bands.

MEALS MUST BE EATEN

The cook, undaunted, rang the handbell for dinner, sharp at twelve. "Go below, mister, watch-and-watch, and don't linger," said Captain Joe grimly to Mate John and the two men of his watch.

"Don't we need all hands --" began Capt. Saunders, and stopped suddenly, remembering he was then only second fiddle in his own orchestra.

It only took ten minutes for the three of them to bolt their hot meat and potatoes, bread and butter, pie and scalding coffee, and get their pipes going and their overcoats and mufflers and schooner-caps pulled on, and go out into the wind and snow again.

"Maybe she's got too much muslin on her," Capt. Parsons explained to the owner-mate as the latter took over the wheel. "More canvas, less ice, for we'll be that much shorter on passage. We'll be in Oswego in two hours more, way she's going -- that is, if we can see the place when we get there. Keep the boys pounding the gear and the anchor chains, and go heavy on the salt."

"Don't think so, but both pumps frozen solid."

Down the companionway, Capt. Parsons and his watch dove to wolf their food. Out again in ten minutes. In the interval, Capt. Saunders, with a red-hot poker, had penetrated the covering of the after pump and got the sounding rod down, well coated with ashes.

It came up dry. Hurrah!

And the snow began to thin. Another Hurrah!

And the land loomed up ahead, all mantled with snow.

They saw the smoke of Oswego. The elevators that then crowded the east side showed up. The seas were spouting against the river current and smashing high up the bank, under the Fort. The breakwater light, iced to its very windvane, looked like a steamer ploughing towards them, they were coming so fast.

Joe Parsons kept the canvas on her till the last minute -- and past it. He was not gong to be caught in the backwash of the nor'wester and the outset of the river current, and tossed helpless on the flat stone beach under the Fort. There were no tugs to help -- all laid up. The Ella Murton was as much on her own as the caravel of Columbus.

Whoosh! She passed the breakwater.

Whoosh! She escaped the deadly east pier where so many a schooner smashed like an egg.

Whoosh! She rushed by the inner light.

"Let go your halliards, throat and peak! Let go your jibs! Downhaul everything, by the run!" sang out Joe.

But the sails, loaded with snow and ice, were no more manageable than so much corrugated iron sheeting.

On every wharf and vessel that the Murton passed, the boys tried to get the bight of a line on spile or timberhead, but some missed and others slipped through the mitts of eager hands, and twice lines that caught and held, parted.

She was going up the harbor at eight miles and hour against the current, and the crowd lining the first bridge, and cheering the brave arrival, began to scatter east and west -- and fast. The year before the Lady MacDonald crashed through that bridge and ruined her owner.

With the Murton's icy jibboom-end knocking sparks and icicles from the iron bridge rail, Parsons swung her hard aport on to the shoal, just below the middle bridge pier. She fetched up on the mud, and was easily warped off and hove over to the elevator.

The port Collector, who had libelled the in 1889 for $2,600 on behalf of the City of Oswego, came bustling aboard the Ella Murton with papers all made out. Captains Saunders and Parsons shrank from him like drivers offered a blue ticket.

"No damage to the bridge that a pot of paint won't cover, Captains," said the Collector, cheerily. "Here's a free clearance for the Murton whenever ye want to take her home. And here's a box of cigars apiece for ye, and an order for the two best hats money can buy in Oswego, for the first arrival of the season. And so we wish you in Canadaway, a HAPPY NEW YEAR!" 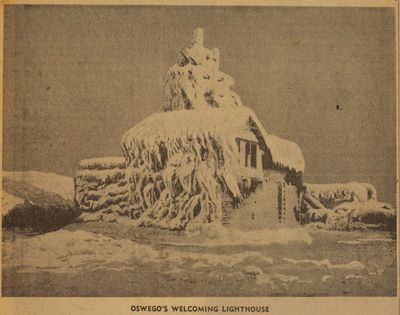