Capt. John Williams, now of 50 Whitehall road, whose 88th birthday anniversary was celebrated so happily last week, was in the great grain rush of 1890, caused by the imminence of the McKinley tariff duties. He was naturally interested in the picture of the Canadian schooners, crowding the Oswego elevators, in the last number of Schooner Days before this. At the party he told something of the rush in which he participated.

It appears that everything that would float was pressed into service to cram the Canadian barley into American elevators before the shut-out duties fell, that fateful November. For example, the 100 ton schooner Robert McDonald, ex Parthenon, which could with difficulty get. 4,000 bushels under hatches was towed back and forth between Oswego and Prince Edward County for several trips during a spell of light weather, and made money on her venture in spite of the tug bills. double the whole of the normal freight. The duties revolutionized Ontario farming, for they killed the export barley trade.

Capt. Williams had the Speedwell then and had already had a good season with her, for he had fitted out in February to carry ice to Charlotte and kept going.

He was the only man who could make the Speedwell, pay for she was a temperamental old buggy and, apparently, would only run for him. She steered badly and would turn around and look at the man at the wheel, and she was slow when other vessels were fast, that is, when they had a "fair wind" on the beam of the quarter, or astern, and a chance to show their paces. That was when she sulked the worst. But she was a grand carrier for her 100 ft., something length being very fat and full-and for "Babe" Blanchard and one or two expert helmsmen she would behave decently, even with a fair wind. Paradoxically, for Johnny Williams, she would make good time by the wind, and was quick as lightning in stays. I myself have seen her tack from full to full for him in seventeen seconds. Some schooners took five minutes, and some never got around at all, but had to wear.

Export gain was being shoved out everywhere on the north shore that fall, and Capt. Williams got an order for 16,000 bushels out of Oakville for the Speedwell. It was likely to biggest cargo that was ever taken from that little port in one bottom, for while big three masters, larger than the two masted Speedwell, used to pick up grain there, they seldom attempted as much as 16,000 bushels at once, because of the depth of water in the creek. They would load 10,000 if they could and finish off in Toronto or elsewhere.

There was deep water up at the grain warehouse, but when the Speedwell was slowly floating down the creek past the lighthouse, or just outside , on the bar, she touched. The weight in her kept her going, and she grounded over the obstruction. But the canny Capt. Williams sounded his pumpwells and found she was leaking. The lake was quiet , the schooner sitting bolt upright in the light wind. He headed her for Toronto, to get his perishable cargo lightened at the old Northern elevator and save it from damage, but he found by the rate she was leaking per hour that his pumps could kept the water down below the ceiling- the barley was above that layer of 3-inch plank. And he struck boldly out for Oswego, and got there the second day.

First thing he did was to file a protest, which cost $1., but protected the vessel against loss for damage if any, to the cargo. Thanks to his diligence with the pumps, every last grain of barley came out dry. An Oswego broker told him he had another cargo for him over on the Canada shore which would net him $400 just for picking up. It was about 10,000 bushels but he would charter him for a full cargo at 4 cents.

"But we're leaking somewhere forward of the centreboard box and ought to go on the drydock," demurred Capt. Williams.

"If you kept. 16,000 dry for two hundred miles from Oakville you can surely keep 10,000 bushels dry for fifty miles from Bath."argued the broker,"we"ll accept that as a full load.

Capt. Williams could not agree with this estimate of distance said he would try for a full load. Listened in the dark hold while the vessel was light, located the leak, took up his limberboards, and stopped it. Made South Bay Point from Oswego, and floated up across the Upper Gap and down the Adolphus. Reach a few miles and eased into the drowsy little Quinte village. There are only the remains of a concrete wharf there now, but sixty years ago Bath was a busy Bay port with steamers calling daily and a shipyard humming. The shipping offices were in a hotel where one coal oil lamp was burning. Nobody knew anything about Capt. Williams' contract, but after some work on the new rural telephone he was told that the barley was in Napanee, and he would have to come around there for it..

This meant sailing all the way up the Adolphus Reach, then up the Long Reach past Hay Bay to Captain John's Island, then a turnoff past Unger Island, and a seven mile squirm up the Napanee River. Capt. Williams felt that he was being chiseled.

"Look " said his friend Bath Matt, "this bird may have a few thousand bushels of barley in Napanee, but whatever it is its' no good to him at all unless he gets it to Oswego before the deadline. Do as he says. Go to Napanee, get what he has into your vessel, and then show him that your charter calls for a full load, and you won't start for Oswego until you have a full load aboard. Then watch him sweat to fill you up, either from his own or someone else's grain."

The wild steering Speedwell worked her way to Napanee under sail in one day, taking the twists of the river by running her mainsail up and down until the masthoops were worn as thin as knife blades and the crew were worn thinner. She got a few thousands bushels in and the shipper said that was all there was, goodbye, Capt. Williams said his charter called for a full cargo and he was doing to wait for it. HE was offered a better freight rate if he would "sign short," for 10,000 bushels, which meant making the vessel responsible for the difference between the way bill and what would be delivered. Nothing Doing. And nothing doing towards a start either. And the deadline nearer every hour.

The Napanee man caved in with a crash. He got the rural telephone going, gave Capt Williams way bills for a full cargo, and provided a tug to tow hm to where he could complete loading. Which was Bath where he had come from. at so much trouble.

The wind was fair to get out of the Napanee river, but the Speedwell made better time with the tug, and still better when she was towed down the Long Reach and around the corner towards Bath, which ws then dead to windward. Here she loaded so much barley that she had 15,000 bushels, which at the original rate of four cents assured her of $600 freight. Capt. Williams had worked all season in 1886 with the Greenwood to clear that much, and had astonished old Capt. Ewart, her owner, by being able to do so well. Capt. Ewart had sold him the Speedwell later, telling him grimly that he himself had never been able to make a dollar out of her, and didn't see how anybody could.

Down the Upper Gap the Speedwell ploughed again, heading for the open lake, When she got there she found a headwind, a dead muzzler for Oswego. Any other vessel would have returned back and waited under south Bay Point for a shift. But Capt. Williams trimmed the Speedwell full-and-by, and tackled the long beat across Lake Ontario. The breeze was fresh, but not too strong, and high up, leaving the water smooth. Every tack the deep laden schooner made she gained a few miles, and the next day the waiting Oswego tugs rushed out and snaked her in to the elevators.

Capt. Williams reported promptly at the harbor office, with his 15,000 bushel bills of lading.

"Grand freight, captain,"said the harbor-master, looking at the clock. "Do you know that you've just beaten the deadline by fifteen minutes?"

This started out to be an article about Bath, but Bath will have to wait for another Saturday night. 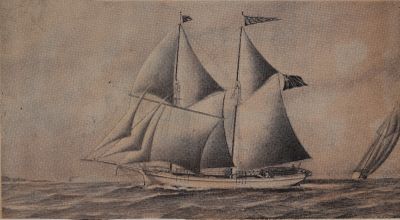