Full Text
Burning of the Erie.

This magnificent steamer, Capt. Titus, commander, was destroyed by fire, on Lake Erie, on the 16th day of August, 1841, by which calamity more than one hundred and seventy-five persons lost their lives. The following account is given of the origin of this disaster. Among the passengers on board were six painters, who were going to Erie,to paint the steamboat Madison. They had with them several large demijohns filled with spirits of turpentine and varnish, which, unknown to Capt. Titus, they had placed on the boiler-deck, directly over the boilers. One of the firemen who survived the accident, asserts that he discovered the dangerous position of these demijohns, a short time after the boat left the wharf, and removed them to a safer locality ; but some person must have replaced them, without being aware of the inflammable nature of the contents. Immediately before the fire broke out, a slight explosion was heard the sound is said to have resembled that which is made by a single puff of a high-pressure steam-engine. The supposition is that one of the demijohns bursted, in consequence of its exposure to the heat. The liquid poured out on the boiler-deck instantly took fire, and within a few minutes all that part of the boat was in flames. The steamer had recently been painted and varnished, and owing to this circumstance, the whole of the woodwork was very soon in a blaze. There were two hundred persons on board the Erie, and of that number only twenty-seven were saved.

Mr. Mann, of Pittsford, N. Y., who was one of the passengers, gives the following narrative, which comprises a history of this memorable and most horrifying event. Mr. Mann was walking on the promenade deck, in company with a young lady, Miss Sherman, and had just reached the point above the boiler-deck where the demijohns were placed, when the singular sound spoken of above arrested his attention. This report was followed by the ascent of a volume of black smoke, which, as Mr. Mann describes it, "resembled a cloud of coal dust." "Without any apprehension of danger, he stopped for a few moments when the smoke subsided, and was instantly succeeded by a red, lurid flame, which spread with fearful rapidity, and soon enveloped every thing combustible that was within its reach, cracking the sky-lights with intense heat, and filling up the space between decks with what appeared to be a dense red flame. While Mr. Mann was looking around for some means of escape, the young lady rushed from him and disappeared ; but in a short time she returned, calling on her father, who, [p. 122] being indisposed, had retired a few minutes before to his berth. Frantic with alarm for her parent's safety, she was again about to rush below, where certain destruction would have met her, when Mr. Mann detained her almost by force, promising to render all possible assistance to her father as soon as he had provided for her own security. A prospect of deliverance now presented itself. Mr. Mann saw a passenger force up a board which formed a part of the seats that surrounded the promenade deck, and throwing it overboard he leaped after it, and was enabled by grasping the plank to keep himself afloat. Mr. Mann followed this person's example, and succeeded in detaching another board, which he hoped to make the means of preserving the life of the affrighted girl who clung to his arm. But new difficulties presented themselves; no persuasions could induce Miss Sherman to descend to the water. In these embarrassing circumstances, he placed one end of the board over the railing at the stern; Miss Sherman was seated on the projecting extremity, and Mr. Mann earnestly entreated some men who were clustered around the rudder post, to assist him in lowering the plank and the young lady to the water, but no attention was paid to his entreaties. Miss Sherman in the meanwhile, being made dizzy by her fearful position, fell from the plank, sunk in the river, and was seen no more.

Having failed in his noble attempt to save this young lady, Mr. Mann now began to make some effort for his own preservation. Glancing around him, he saw Capt. Titus endeavoring to reach the ladies' cabin, and heard him give the order to stop the engine. It was a moment of overwhelming terror. From bulk-head to rudder, the flames were raging with an impetuosity which seemed to mock at all [p 123] hope of deliverance. The shrieks of many human beings expiring in fiery torment within the vessel, and the cries for assistance of many others who were struggling in the water, almost deprived the listener of sense and reflection. The engine seemed to work with a double power, as if it were maddened by the appaling character of the scene. The flames, as they rushed aft, sounded like the roaring of a hurricane, threatening every moment to engulf the boat and every affrighted soul on board. Forward of the wheel-house several persons were struggling to wrench partially loosened timber from the vessel, for the purpose of sustaining themselves in the water. Below and in rear of the ladies' cabin, some thirty or forty people were clustered, each frantically endeavoring to descend by the rudder chains for safety. In this, some had partly succeeded, but were forced off by others struggling for the same object. Several persons were hanging from the sides of the boat, husbands vainly endeavoring to sustain their wives in that position, and mothers their children. But not one of all the females whom Mr. Mann saw gathered there, and not one of the children, was saved. Wives, mothers, helpless infants, all sunk "with bubbling groan" into the deep tomb of waters.

After making this survey, and abandoning every other hope of escape, Mr. Mann, who still grasped the board from which the unfortunate young lady had fallen, threw it into the lake, and immediately followedi t. He sunk for a moment, but arose to the surface, fortunately by the side of the plank, to which he now clung with desperate energy, as his last resource. He had companions in the terrible struggle for life, but they were few ; the greater number had already yielded to the mighty conqueror. Here was one buffeting the waves, unsustained by any thing but his own strength, but that was doubled by the energy of a last hope. There was another shrieking for aid, in a voice which became fainter every moment, and was interrupted by a gurgling sound which foretold a speedy termination of the struggle. From another direction came the voice of supplication, the last prayer of a dying man, not for deliverance from earthly peril, (for all hope of that had been abandoned,) but for pardon for himself and protection for a wife and children far distant. Then was heard the shriek of the mother, bewailing the child. which she had vainly endeavoured to withhold from the distended jaws of death. Turning his agonized gaze to the deck above him, Mr. Mann saw many passengers, one after another, throw themselves into the water; the greater number, after a few feeble efforts to save themselves from the fate which threatened them, disappeared with wild exclamations of terror and despair.

[p. 124] When Mr. Mann left the deck of the burning steamer, she was driving ahead with a rapid motion ; but having left him on his plank about two miles astern, she suddenly veered around, and again approached him; so near did she come, indeed, that he was in danger of being engulfed, but contrived, with some difficulty, to get out of her way. As the boat passed him, he saw five or six persons hanging to the anchor, and about as many more holding on to the pole which supported the liberty cap at the bow. All of them appeared to be suffering greatly from the heat. Near the bulkhead, a person stood almost surrounded by fire ; he held in his hand a piece of white cloth, with which he appeared to be bathing his face, which must have been severely scorched. When he saw Mr Mann,he begged him, for God's sake, to allow him to get on the plank, as he could not swim, and therefore dare not leap into the water. Mr. Mann replied that the plank would not support two persons, but the suppliant made such piteous entreaties, that Mr. Mann was about to yield, when a heavy swell bore the blazing wreck to a distance, and carried the unhappy sufferer beyond the reach of all human aid.

When Mr. Mann had been in the water about two hours, he was taken up by the steamboat De Witt Clinton, which rescued several others of the drowning passengers.

Among others who embarked at Buffalo in this ill-fated boat, were two brothers, Charles J. Lynde and Walter Lynde, sons of the Hon. Tully Lynde, of Homer, Cortland Co., N.Y. These brothers resided at Chicago, and were returning from a visit to their parents. The wife of one of these young gentlemen, a lady of superior intellect, was the only female passenger saved. She conducted herself throughout the whole trying scene with exemplary fortitude and intrepidity. Her husband had provided two life preservers, one for her and one for himself. As soon as it became evident that the boat could not be saved, Mrs. Lynde fastened her life-preserver around her waist, and fearlessly committed herself to the water, expecting that her husband would follow immediately. But in this she was disappointed ; her anxious gaze searched in vain among the floating objects on the water, for the dearest object of her affection. Yet, although she saw him not, she had no fears for his safety, as she had seen him put on his life-preserver before she left the boat. He was much excited at the time, and she exhorted him to be more calm and self-possessed. When the De Witt Clinton had taken up all the persons that could be found floating on the water, and Mrs. Lynde among the rest, she eagerly sought her husband among those who had been rescued. He was not there ; but she [p. 125] saw the life-preserver, which she knew to be his, in the possession of a German, who was one of the deck passengers. The man declared that he had found it in the water, and made it instrumental in saving his own life. It was believed by some persons that the German, in order to save himself, had wrenched the preserver from Mr. Lynde; but the more charitable supposition is, that Mr. Lynde, in his excitement and agitation, had failed to fasten it securely to his person, so that it came off at the moment he leaped into the water. There was a musical band, consisting of ten persons, on board the Erie, all of whom, except two, perished in the conflagration, or in the water.

The following list of the killed, wounded and missing is the most complete that could be obtained.

Among those who perished were a number of infants, not included in the preceding list, as no charge was made for their passage, and they were therefore not mentioned on the boat's books. 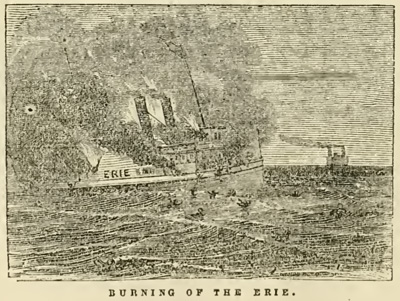