The fine steamer G. P. Griffith took fire on Lake Erie, about twenty miles below Cleveland, and was burnt to the water's edge, on June 17, 1850. The passengers were all in their berths when the alarm of fire was given, about three o'clock in the morning. The day had just begun to dawn, and the shore was in sight. At first very little alarm was felt on board, as the boat was rapidly approaching the shore, to which her head had been directed. But alas ! the prospect of speedy deliverance soon vanished, and every heart was chilled with terror when the steamer, while yet half a mile from land, struck on a sand- bar and became immovable.

"Then rose from sea to sky the wild farewell, Then shrieked the timid, and stood still the brave."

Many of the passengers then plunged madly into the lake, and few of these were saved. The scene on the burning vessel is represented as one which would have agonized any spectator who had no personal interest in the event. What must it have been to those whose lives, and lives even dearer than their own, were subject to the contingencies of [p. 265] a moment? The consternation of all on board may be estimated from the fact that scarcely any of the survivors were able to give a lucid account of the catastrophe. There were three hundred and twenty-six persons on the boat ; of these, only about thirty, who were able to swim ashore, were saved. Every child perished, and every woman except one, the wife of the barber. One of the passengers, a Mr. Parkes, had secured a piece of the wreck, which was barely sufficient to support him on the surface, and he was reduced to the horrible necessity of pushing others away when they attempted to sustain themselves on the same fragment. He saw scores of people sinking around him, and heard many a voice exclaiming in piteous accents, " Save me ! save me !" But who can be humane at such a moment? Who can feel pity for others, when his own life is exposed to the most imminent peril ? Mr. Parkes says, that for a moment he felt like "giving up," and dying with his fellow passengers. But the instinct of self preservation was too strong for the emotions of sympathy. Soon he found himself almost solitary on the bosom of the lake. Most of the struggling people had disappeared, their wild supplications for aid had ceased and nothing was heard except the sullen sound of the waters as they beat against the charred hull of the steamer.

One of the passengers gives the following account of his escape. He was aroused from his slumber by the cries of fire and the screams of women and children. When he reached the deck he found that the boat was about three miles from land. The second mate gave orders for the boat to be steered towards the shore. She reached the bar half a mile from land, before the flames had made much progress ; but as soon as the steamer grounded on that bar, the fire spread with appalling rapidity. One of the officers directed the passengers to save [p. 265] themselves, but did not point out any means of escape. Many of the passengers threw themselves overboard. The narrator says they leaped out of the boat in crowds, twenty at a time. The Captain remained on the upper deck, near his state room, forward of the wheelhouse. When nearly all the passengers had jumped overboard to escape from the flames, the Captain threw his mother, his wife and child, and the barber's wife into the lake, and then plunged in himself. He remained a moment on the surface with his wife in his arms, and then both sunk together. The passenger who tells this story saved himself on a small piece of plank, supported by which he contrived to reach the shore.

The books of the boat were lost, therefore the names of very few of the victims can be given. But it is known that the loss of life was greater than in any previous disaster on the lake, except only in the case of the steamer Erie. One hundred and fifty-four dead bodies were recovered, and probably from thirty to fifty more remained at the bottom of the lake. The scene on the shore, after the awful tragedy was finished, was melancholy in the extreme. One hundred and fifty dead bodies were strewn along the beach. Boats had been employed in dragging for them at the spot where the wreck lay. A long trench was dug on the shore, and here the greater number of the dead were interred, unshrouded and uncoffined, and many of them unknown.

Henry Wilkinson, the clerk of the Griffith, swam ashore by supporting his chin on a piece of firewood. When about to leave the wreck, he first threw his mother and little niece overboard, and endeavored to save them, but was unable to do so, being nearly drowned in the attempt. 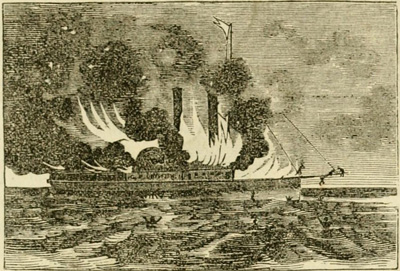