The barge Halsted, which was on the beach at Washington Harbor, was re­ leased and brought here Sunday.

The Halsted was driven on the beach during the storm of November last and was given up as a total loss, having been raised high and dry by the wind and waves. Her owners, the Soper Lumber Co., offered her for sale and she was purchased by Greilling Bros. of Green Bay. Several weeks,ago the dredge be­longing to the Company was sent to Washington Harbor while on its way to Thompson, Mich., and a channel was dug to the stranded vessel thru the sand and gravel. After everything was in readiness the barge was rolled into the ditch and pulled out into the harbor. She was brought here Sunday by the steam barge Albert Soper and landed at the shipyard, where she was put on the boxes for an examination and repairs. It was found that some of the planks on the bottom needed replacing, this pound­ing she received during the terrific storm having broken or chewed them pretty badly.

The Greilling company will have the vessel fixed up at the shipyard and feel that they will have a cheap boat at that. She will be used by them in their contract work.

The above picture of the boat shows the condition she was in after the storm, and also gives some idea of the wreck­ing job required to effect her release. 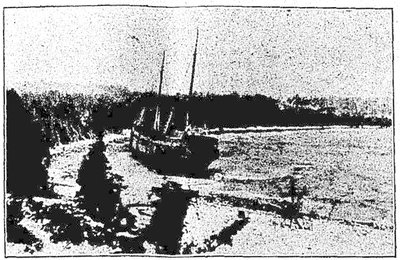