Reverse: "7996. It is the lower gate of the Weitzel Lock that rises just ahead. Those trees beyond are on Michigan soil. We are facing towards the Lake Superior region, with Canada off at our right,across the rapids of St. Mary's river. It is in order to avoid the rapids that $16,0000,000 have been expended on a mile-long ship canal. The whole descent is not great -- only seventeen feet, but the rapids practically forbid navigation in anything bigger than pleasure boats.

That lake steamer now waiting for down-lockage, comes from a Lake Superior port -- the passenger traffic by this route is steadily increasing, though the enormous commercial importance of the engineering work depends on the vast cargoes of grain and metals taken through by freighters. Some vessels passing through here are bound for Chicago and Milwaukee, some for Detroit, Cleveland, Buffalo or farther down in Canada. The annual tonnage of vessels passing through here amounts to over 32,000,000 during the seven or eight months that navigation is open. It is a greater commercial highway than the Suez Canal.

The lower gates have been opened (by hydraulic power) and we see the effect in the furious up-boiling of the water down at the left as the imprisoned floods hurry out to equalize the level. It takes only about seven minutes to fill or empty a lock here, so perfect is the mechanism employed.

The U. S. Government bears the administration expenses, lockage being entirely free. (See other outlooks over and about the canal, by means of Stereographs 7993-5, 7997) 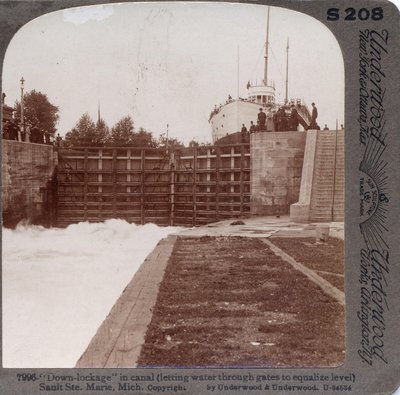