A notable vessel, being the first steamboat built in the United States to measure over 1000 tons, and was, at the time she came out, 200 tons larger than any other steam vessel in the World. Instead of the round, bluff bow and square stern of the usual build of lake boats at that period, the EMPIRE had an excellent model, being sharp at both ends. She was the fastest as well as the most elegantly fitted up boat on the Great Lakes.

She ran for many years between Buffalo and Chicago and was afterwards used on the Buffalo and Toledo route. Later she was converted into a propeller. 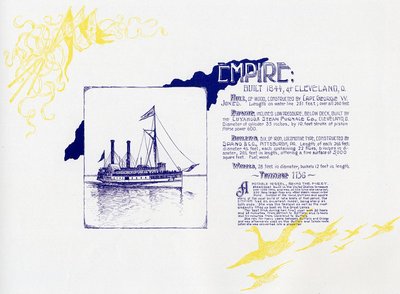