We hear a great deal of the Suez Canal and of the Panama Canal. But there is a canal in the United States that handles more traffic than either. This is the Sault Ste. Marie or the St. Mary's Falls Ship Canal. It is popularly called the "Soo Canal." More tonnage passes through it yearly than through any canal in the world.

This ship canal connects Lake Superior and Lake Huron. You can find it marked and named in your geographies, if you turn to the map of Michigan. The St. Mary's River between the two great lakes is about a mile wide, and falls 20 feet in three-fourths of a mile. To get boats around the rapids a canal had to be built.

The Northwest Fur Company built the first one in 1797-1798. Later the state of Michigan took the work up, and finally the Federal Government helped. A ship canal was constructed 1 1/2 miles long, and deep enough to carry the largest lake boats. One of the locks, in this canal is 1,350 feet long and will carry boats that draw 24 1/2 feet of water. The walls and power houses are built of concrete. The entire canal is modernly equipped with electric appliances, as you see. This picture shows how heavy the traffic is that passes through the "Soo." Here are two great lake steamers going through a lock side by side. Boats laden with iron ore from Superior or grain from Duluth or coal from the Pittsburgh district -- all pass through this waterway which formerly was only an Indian fishing ground.

Which way is the "Soo" from Detroit?

Copyright by The Keystone View Company. 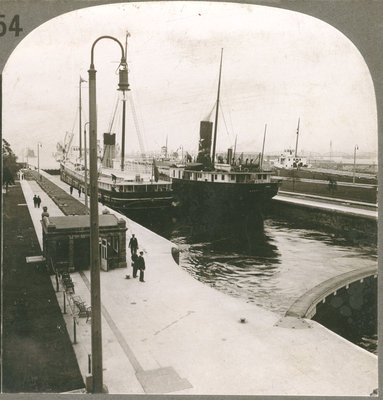