Creator
Neuschel, Fred, Author
Media Type
Text
Item Type
Articles
Description
Those with an interest in the maritime history of the Great Lakes may well agree that while stories abound, historical writings are more scarce. Shipwrecks have been documented extensively, but the question of what sailors were doing when not caught up in catastrophes remains largely unanswered. Studying the development of maritime dependent communities, however, offers the promise of seeing the context in which sailors lived and thus being able to understand more about their place within the local society. Algoma, Wisconsin, is one community which provides insight into the lives of the owners, masters and crew of the small and independently-owned schooners which were ubiquitous on the lakes but were rarely commented upon except when they met disaster. What can be seen in Algoma's history takes us far beyond the confining stereotype of sailors as bawdy, hard-drinking, waterbourne nomads. There, and presumably in other small maritime towns, common sailors occupied an impo rtant, respectable and responsible niche within the community. Their entrepreneurial spirit shaped both the local economy and local politics. Through small scale commercial sailing enterprises first- and second-generation immigrants found a way to escape rural poverty and become more fully integrated into the socio-economic mainstream. But perhaps most fascinating, the sailors and their vessels became a vital part of local mythology, providing heroes whose names are still remembered 125 years later.
Date of Publication
Jan 1998
Date Of Event
1851-1898
Subject(s)
Business people
Sailors
Schooners
Language of Item
English
Geographic Coverage
Copyright Statement
Protected by copyright: Uses other than research or private study require the permission of the rights holder(s). Responsibility for obtaining permissions and for any use rests exclusively with the user.
Copyright Holder
Canadian Nautical Research Society
Recommended Citation
The Northern Mariner/Le Marin du nord, VIII, No. 1 (January 1998), 65-82.
Contact
Canadian Nautical Research Society 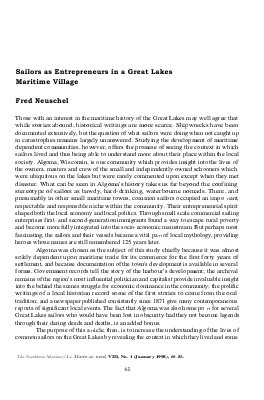