Creator
Malcomson, Tom, Author
Media Type
Text
Item Type
Articles
Description
In response to the pleas of Governor General George Prevost, in the spring of 1813 the Admiralty sent Commodore James Lucas Yeo and 447 men of the Royal Navy to the inland seas of North America. The war between Britain and the United States had entered its first full year with both sides cognizant of the critical importance control of the Great Lakes would play in the success of any future land campaign. The Americans had sent Commo- dore Isaac Chauncey and a steady stream of experienced sailors to Lake Ontario in the fall of 1812. On the British side, the Provincial Marine had proved no match for the Americans, who controlled the lake by the end of the 1812 sailing season. The arrival of British sailors was meant to meet the American challenge and to re-establish ascendancy. The present article strives to increase our knowledge about the men of the Royal Navy who were sent out to the Great Lakes during the War of 1812. It accomplishes this through a quantitative analysis of a portion of the muster table created for the squadron on Lake Ontario on 9 May 1813 as the men left Lachine, just west of Montréal, bound for Kingston, Upper Canada.
Date of Publication
Apr 1999
Date Of Event
1813
Subject(s)
Naval yards & naval stations
Navies
Sailors
Corporate Name(s)
Royal Navy
Language of Item
English
Geographic Coverage
Copyright Statement
Protected by copyright: Uses other than research or private study require the permission of the rights holder(s). Responsibility for obtaining permissions and for any use rests exclusively with the user.
Copyright Holder
Canadian Nautical Research Society
Recommended Citation
The Northern Mariner/Le Marin du nord, IX, No. 2 (April 1999), 41 -67.
Contact
Canadian Nautical Research Society 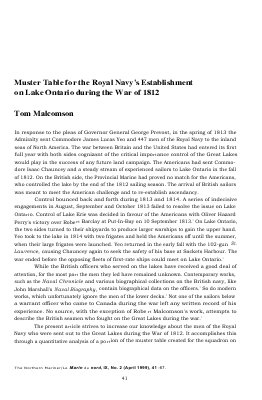