Creator
Mount, Graeme S., Author
Media Type
Text
Item Type
Articles
Description
This article began as a piece of local history. Jeff Wallace, now a Sudbury lawyer, spent his childhood summers near Little Current on the Manitoulin Island. There he heard rumours of a presidential visit, of the people who supposedly accompanied President Franklin Delano Roosevelt (including, according to some accounts, Lucy Mercer Rutherfurd and Winston Churchill) and of a plane which crashed and sank. Islanders reported that the Roosevelt visit was so secret that it attracted little or no attention in history books. Wallace organized a team of scuba divers which found the aircraft, now housed at the island museum on the east side of Highway 6 south of Little Current. Having found tangible evidence ofthe presidential visit, Wallace had a number of unresolved questions. What was the truth of the rumours? Why would Roosevelt take a vacation, if the trip to Northern Ontario really was a vacation, during the critical summer of 1943? What could the presidential party really have been doing? This article summarizes what actually did happen, and in so doing, it dispels rumours. It also deals with challenges connected with presidential travel in time of war (even to a friendly country like Canada), wartime censorship in Canada, and, to a limited extent, Canadians' views of President Franklin Delano Roosevelt.
Date of Publication
Jul 2001
Date Of Event
1-7 August 1843
Subject(s)
Presidents
Vacations
Language of Item
English
Geographic Coverage
Copyright Statement
Protected by copyright: Uses other than research or private study require the permission of the rights holder(s). Responsibility for obtaining permissions and for any use rests exclusively with the user.
Copyright Holder
Canadian Nautical Research Society
Recommended Citation
The Northern Mariner/Le marin du nord, XI, No. 3 (July 2001), 23 -32 .
Contact
Canadian Nautical Research Society 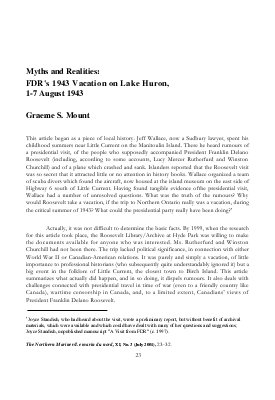