Creator
Mason, Kathy S., Author
Media Type
Text
Item Type
Articles
Description
Elizabeth Whitney Williams grew up on Beaver Island in northern Lake Michigan. She became guardian of the lighthouse of the port of this island in 1872, following the death of her husband, lighthouse keeper himself, during an attempt to rescue sailors shipwrecked. After twelve years of service on Beaver Island, she secured another position as a keeper in Harbor Springs, Michigan at Harbor Point Light, where she served for twenty-nine years.

Elizabeth Williams earned a modest notoriety with the publication of her autobiography, A Child of the Sea, in 1905. Elizabeth William's biography is striking, in part, because few women held the position of Lighthouse keeper. This caretaking, however, was a socially acceptable occupation for a small number of women in the 19th century because their functions were often compatible with notions of female domesticity in the middle classes.
Date of Publication
Jan 2008
Date Of Event
1872-1913
Subject(s)
Lighthouse keepers
Language of Item
English
Geographic Coverage
Copyright Statement
Protected by copyright: Uses other than research or private study require the permission of the rights holder(s). Responsibility for obtaining permissions and for any use rests exclusively with the user.
Copyright Holder
Canadian Nautical Research Society
Recommended Citation
The Northern Mariner/le marin du nord, XVIII No. 1, (January 2008), 29-38
Contact
Canadian Nautical Research Society 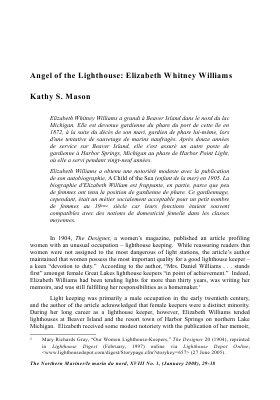 Comment on this item Create electronic postcard
Other Web sites/External links
Text of Mason, Angel of the Lighthouse