Creator
Calnan, Joe, Author
Media Type
Text
Item Type
Articles
Description
The French explorer Robert Cavelier de La Salle (1643-1687) had a small rigged sailing coaster built in 1679 to travel between the Niagara River and Lake Michigan. La Salle hired a qualified and experienced pilot to conduct the vessel on these waters, but within nine months of starting on the Great Lakes, the pilot had lost two boats entrusted to him and disappeared with the crew. The loss of La Salle's Griffon was chronicled by Louis Hennepin, the missionary, and became one of the great mysteries of the Great Lakes. Today, the pilot has gained notoriety as a great Danish heretic, in a bad mood, seven feet tall, named Luke Dare; But whether this character has its foundation in primary sources or in folklore has never been clearly established. By systematically examining the origins of the information we have about the pilot in both primary and secondary documents, this paper attempts to separate folklore from verifiable sources and shed light on a more accurate picture of the pilot of La Salle's Griffon.
Date of Publication
Jul 2013
Date Of Event
1678-79
Subject(s)
Sailors
Shipwrecks
Griffon (barque)
Language of Item
English
Geographic Coverage
Copyright Statement
Protected by copyright: Uses other than research or private study require the permission of the rights holder(s). Responsibility for obtaining permissions and for any use rests exclusively with the user.
Copyright Holder
Canadian Nautical Research Society
Recommended Citation
The Northern Mariner/le marin du nord, XXIII No. 3, (July 2013), 213-238
Contact
Canadian Nautical Research Society 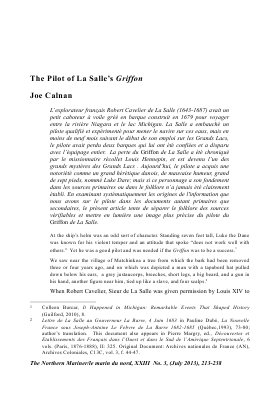 Comment on this item Create electronic postcard
Other Web sites/External links
Text of Calnan, Pilot of the Griffon