Full Text
Terrible Explosion of the Steamer Globe at Chicago

It is our painful duty to-day to illustrate on e of those appalling catastrophes which has rendered Western travelling so dangerous, and, we fear, from what we have read in the local papers, that it was the result of the grossest carelessness. On the morning of Thursday, 8th November, about nine o'clock, the citizens in the vicinity of Clarke and Well streets, Chicago, were startled by a tremendous explosion upon the north side of the river, and at the same instant the air was filled with a shower of beams, iron and splinters of every description. This was found to be the remains of the propeller Globe, Captain Amos Pratt, lying at Hale's dock.

The Globe had only arrived about five hours that morning from Buffalo with a cargo of apples and other merchandise. She had also brought some passengers, all of whom had left the vessel. The engineers and firemen were in the engine-room taking of a cylinder head. The steam had been blown off from one of the boilers and the fire put out, the other boiler had but little steam in it. While they were thus occupied, the boiler exploded with terrific force, tearing the propeller into atoms, and covering the adjacent parts with the wreck of the ill-fated vessel. The crew numbered twenty-five in all and it is feared that most of them have perished. The force of the shock was terrible. The long block of buildings adjoining the north side of the river was shaken as by an earthquake. The windows were all broken and the ceilings destroyed.

Some idea may be formed of the wonderful power concealed in a drop of water from some of the particular effects of the explosion. The iron of the boilers, as we have said, was ripped asunder as if it had only been so much paper. The boilers were literally torn to shreds, and one of them, less torn than the others, was twisted and collapsed like an old felt hat that has been through an election-day fight.

A piece of timber, weighing some two hundred and fifty pounds, was thrown across the river and into the rear office of Messrs. Stewart, Youle & Co., in the Board of Trade Building. It entered via the window, and landed in the middle of the room. Mr. Stewart had left the room scarcely a minute before the intrusion of the unwelcome projectile.

One of the fenders of the boat, weighing two hundred pounds, was blown through the air and hurled into the rear of Larrabee & North's hardware store, over a block from the dock, and cutting out a circular piece of a foot in diameter from the centre of a thick iron shutter.

The Globe was one of the oldest of our lake craft now in commission. She came from the stocks as a side-wheel steamboat in 1848. Subsequently she was altered to a propeller. Her present engines were comparatively new, having taken the place of the old ones, which were condemned about four years ago. She was registered as a B 2 vessel, with a valuation of $17,000. She was insured for $5,000, but as marine policies do not cover loss or damage by explosion, the loss will fall entirely upon her owner, Mr. William O. Brown, of Buffalo. She was commanded by Captain Amos Pratt, one of the oldest and best of lake navigators. 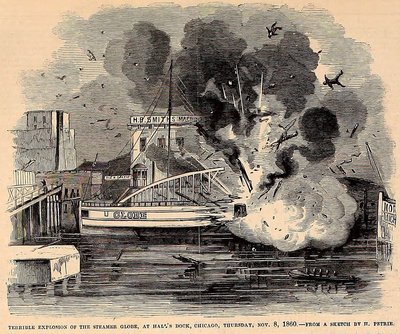 Wreck of the Steamer after the explosion

Hole made in an iron shutter

Rear of the Board of Trade Building
Groups of Related Records