Another quiz, with the answer right under your nose

Where is this place Bear Creek?

That's where this photograph was taken last week by A. Van. A Telegram staff photographer so good as these things that the “A” in his name could stand for ace.

This in one of so many little harbors of refuge and havens of delight which could be made available for all sailors, amateur and professional, by the expenditure of a few thousand dollars on dredging and a few hundred dollars on electric light.

What called it to mind was the plight of two plucky RCYC men, one crippled, who had to risk death this week under Scarboro bluffs when their star-boat was dismasted between Oshawa and Toronto.

In that thirty mile stretch of shore there are the following potential harbors of refuge which could have been available for their disabled Ripple, and which would be of great cash value as a tourist attraction. Let none sniff at the tourist trade value of the cruising sailor however humble. We counted thirty eight power and sail yachts and two flying boats in Presqu'ile Cove three weeks ago brought there from all over Lake Ontario by the Freeman Cup race. Here were two hundred friends to be made, all visitors with money to spend and good will to be gained all worth while customers for Canada, whether born in Todmorden, Toronto or Rainbuctor.

But to enumerate the refuge inlets between Toronto and Oshawa:

1. The cut into Ashbridge's Bay, once known as The Jetty now used by the Ashbrige's Bay Yacht Club and unfortunately, the sanitary squad.

All of these except The Jetty were used by the coasting schooners of a hundred years ago, and ships were built in them, but with the dubious exception of Frenchman's and Port Whitby, which the Ripple was unable to reach, they have been allowed to go to “wrack and ruin,” although landowners are keen enough to sell or rent camp or cottage sites around them. Port Whitby is a good small harbor with an awful gap in its old breakwater due to the high lake level and the worst light on Lake Ontario. Dredging could restore Frenchman's Bay to what it was in the rafting and barley days. Although a 60 feet channel claiming 8 feet depth at present abnormally high water was recently been dredged, more dredging and more protection there is sorely needed. The place is yet without piers and a lighthouse and the narrow channel leads to very shoal water inside the bay.

No one in his senses would tackle the creek mouths with a standing keel boat, no mater how small and until the present high water they were often completely barred up between the spring freshets and the fall rains.

The Ripple boys were lucky to escape with their lives and to have had their little craft towed to safety by the lifesaving crew after Bob Clements had made the gallant but futile attempt with an outboard.

Returning to Bear Creek, it too needs dredging, cribbing and a simple guiding light, but as may be seen from the picture it is patronized by small craft of the size of the Ripple or larger.

Once tugs came into it to tow out the barges laden with iron ore, and it did a considerable trade in cedar posts and ties, apples, grain and country produce. Some coal was brought in and some pig iron shipped out, seventy years ago, for nearby was a little place we shall call Furnaceville, where up to 1877 was a blast furnace capable of producing ten tons of pig a day.

You may think we are talking about the old iron ore docks at the Carrying Place in Weller's Bay, but we are not. Close to Bear Creek a long pier ran out into the lake, capable of berthing three-masted schooners. The American three master Rival, Capt. Holling was often one of the customer there sometimes loading grain, sometimes delivering coal. Bear Creek itself was too small for her, but it was then big enough to accommodate such two masters as the Marcia A. Hall of Windsor, Robert McDonald of Picton (ex Parthenon of Oakville) the Kate of Oakville, Pilot of Pultneyville, Echo of Toronto, F.F. Cole of Picton, and Suan Seible of Grafton, John Goldring's Helen ex Pugsley or the Goldring fleet out of Whitby, Maple Leaf, North West and Rapid City, Bunchwod schooners from the Bay of Quinte also when there sometimes.

Bear Creek, like Bronte, was also one of the way stations on the Underground Railroad which brought many fortunate escaped slaves from toiling mid the cotton and the cane to the freedom of the British Flag.

One of the wrecks there was of the Toronto Schooner W.Y. Emery of Port Burwell, in 1899 or so. She got ashore there after she had refitted at the foot of Church street here one winter. The preceding fall in a late trip laden with coal for the old Electric Light Co., she was dismasted down the lake, losing everything but the foremast below the crosstrees. Old Capt. Andrew Baird got her under the land of Frenchman's Bay with what remained of her foremast, and the Electric Light Co.,'s little steam launch Torpedo towed her home. Capt Robert Porter and his sons bought her at a bargain and refitted her, but she was soon in trouble again at Bear Creek. Our recollection is that this was her Finale. 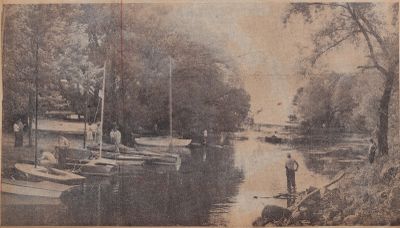