In this Magistrate J. J. O’Connor, who went through the school of experience in the lake schooners before he became District Magistrate for Thunder Bay, tells of how fathers loved their sons and sailors loved their craft, sixty years ago. Magistrate O’Connor died at his home in Port Arthur last summer, greatly respected and greatly regretted.

The sap in the trees and the snap in the air.

Eggs for breakfast, a point of honor to eat the most.

There were ten of us boys on the farm. Not all at once, for the last young codger got there after I had left home and grown a moustache and become mate.

But by this Easter of '69 enough of us had arrived to keep my father on the hop to see that we grew up good men. And this particular Sunday was one of his testing times. Father’s farm at this time was to the east of Frenchman’s Bay, about a mile from the water. This was before we moved to Port Whitby.

It was a bright Sunday. The ice had gone from the harbor and the snow had followed, even from the snake-fence corners. In every spring puddle the young frogs shrilled and trilled, and the clouds sailed high and bright through the clear far blue.

We knew that Frenchman's Bay would be carpeted with the winter's cut of trees and squared timber, and that sandwiched between the sawlogs would be a fleet of vessels, just in for the first spring pick-up of barley or shinglebolts, or fitting out after wintering in the port. But—

It was Sunday, and father said we must not stray away from the house that afternoon.

In particular had he forbidden us to visit the Bay. Easter Sunday was no time for that, with all the crews between Cramahe and Wellington Square on a spring carouse.

"Well," said Dan, my eldest brother, as we gathered disconsolately on the sunny side of the cowshed, “he didn't say we couldn't shoot the bone R."

The bow-and-arrow, reduced by constant usage in our boyish lexicon to the ossified eighteenth letter of the alphabet, was a favorite pastime with us. Dan had a good bow and I soon produced it and sent an arrow soaring towards the sun.

It fell to the west.

And the Bay was to the west.

We all went to see just how far he had shot, and when we got there he shot again. And again the arrow fell towards the west. And the Bay. And so, almost before we knew it, certainly before we had thought of the consequences, we were at the Bay shore.

Carousing crews there were none. Perhaps they had gone up to Dumbarton or Liverpool Market. Or still more likely, they were soberly making shavings in the April sunshine, or sleeping the sleep of the hard laborer’s holiday. But the Bay, as we had hoped, bristled with the spars of incoming or outfitting vessels. And among them

I saw the Lord Nelson of Bronte.

I had seen few vessels before, and have seen many since, but I never saw any which impressed me like this little fellow, ablaze with fresh paint in the Easter sunlight.

She was a sharp clipper-bowed thing of a hundred tons or so, two-masted, with a good spring to her sheer. Black, with a white sheerstrake, and bright red underbody, the red sweeping up in swift curves at bow and stern.

The name was there in good bold letters, black on a white band, not too big, but loud enough to make Napoleon turn in his grave:

I had only the dimmest idea of what Bronte was. To me it was some mysterious place away to the west away past Toronto. I did not think of it as a tiny hole in the bank, no bigger than the nearby Dumbarton, but set in a country all aglow with the Nelson name and fame: Port Nelson for its next door neighbor. Trafalgar for their township. Still less did I think of it as an Italian dukedom bestowed upon the sailor's idol by the King of the Sicilies and dripping with the Mediterranean romance of Lady Hamilton. Sic' flights, as Tam o’ Shanter's bard says, were far ayont the power of my childish fancy.

But in this lovely little fresh painted schooner I caught a reflection of great if unknown glory: and my heart thrilled with the embellishment above the painted name.

There, right across the stern from side to side, was depicted the Battle of Trafalgar.

Chequer sided warships with square sails spotted with shot holes were boarding one another through billowing clouds of smoke, and in the foreground Nelson’s Victory was breaking the battle-line, taking on the French Bucentaure and Redoubtable, two at a time. The scene covered the whole stern twenty feet wide. It was done like a theatre curtain, with painted drapes at the sides. Whatever its merits, it gave my boyish fancy a thrill and a direction which carried it far. I resolved to be a sailor. And a sailor I became.

More than one arrow that Easter Sunday led me to the water.

If, as Ruskin says, art is the expression of man’s joy in his work, then the sailors of my time were artists. They took such joy in their vessels. They loved them and lived for them.

Sam Malcolmson, of Hamilton, for instance, so loved the Jessie L. Scarth, that he had panels of scenery painted on the inside of her bulwarks. As he explained, he wanted to stay aboard her and still see her, the beauty that she was.

Above all was embellishment then lavished on the stern. This was fitting, for here by law was inscribed the vessel’s name and her port of hail, and if she had any finery to display, this was the place for it.

A device many stern-painters employed was to represent sweeping curtains in rich crimson or azure, held back by golden cords and unfolding a scene or a portrait. Even such a tiny hooker as the Ann Brown of Port Credit, which was only 36 feet long from end to end—the size of a steamer's lifeboat! —had the portrait of Miss Brown, reclining, gracefully in a canoe, revealed by looped-back curtains painted above the legend of her name.

One of the best examples of stem painting, and comparatively modern, too, was the scene painted across the full width of the Keewatin when she came out in 1888.

She had been the two masted schooner Paragon, built at Oshawa in 1852. Enlarged and rerigged as a 3-master at Colborne thirty-six years later, she was relaunched as the Keewatin, with a most elaborate representation of two red Indians, in full color and in life size, smoking the pipe of peace across a river.

Riel's rebellion was then only three years old and Canada was full of the possibilities of the Keewatin district and the golden North West.

The name Keewatin was said to mean “Fair Wind.” At least sailors so believed, and there is nothing they want more than a fair wind, except more of the same.

The Indians on the schooner’s stern were supposed to be blessing her with a perpetual supply of this highly desirable commodity, And to tell the truth the Keewatin needed it, for she was no yacht going to windward.

I understand however, that Keewatin or Keewey din, is really the Cree word for the Land of the North Wind. Two items I never unde rstood in the Keewatin's stern picture were boar's heads in either upper corner. I have always felt that the highland ancestry of her owner, A. Campbell, Esq., of Colborne, might account for these and for the arch of bare branches which framed the Keewatin's picture.

Old Capt. John Keith sailed her all over the Great Lakes—she was in the Chicago-Collingwood trade as the Paragon as early as 1855—and later Capt. Jim Redfern had her and she carried coal for Elias Rogers from Oswego. I believe she was one of the lake fleet which were "down below" — that is to the Gulf of St. Lawrence or the sea lashed three abreast, to become barges during the Great War. None ever came back.

These arrows of recollection have carried me farther than the mile I strayed from home that Easter sixty years ago!

We returned in good time for supper, Trust growing boys to do that. Everything passed off in the usual Sunday evening manner. When we had scraped the last of the fried potatoes from the last plate father said casually to my eldest brother: "Go out now to the wood lot before it gets dark and cut me a few good beech gads."

Daniel looked much like his namesake when they said: "This way to the lions' cage!" but he was a good sport and out he went.

Soon, all too soon, he was back. We who waited noted with satisfaction that he had only brought the specified "few” gads, and no superfluous number of spares.

Dan took his first, like a man. Father made a thorough job of it. Not viciously, but where it would do the most good. Talking of posterior applied art—ahem!

We littler fellows got all that was coining to us, though the gad supply was deteriorating and father's hand was losing, if not its cunning, at least its pristine freshness of application.

We went to bed warmer and wiser boys. There were no hard feelings afterwards, though there were sore foundations. Father served us right. We earned what we got, and we learned the lesson of obedience.

It was the only time my father punished any of us. It taught me discipline. But I am still glad I saw the Lord Nelson of Bronte as I did and when I did.

INDIANS EVER WAFTED THE KEEWATIN ON A FAIR WIND

Typical stern picture of the golden days of lake craft, from a photograph of the launch of the Keewatin at Colborne, Ont., July 23rd 1888, kindly lent The Telegram by Capt. Peter Shaw, 19 Mountjoy avenue, Toronto. 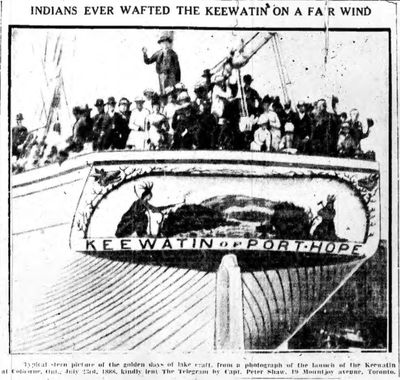