Magistrate J.J. O' Connor, of Port Arthur, mariner in his youth, retained a keen interest in the history of the sailing commerce of the lakes. Before his death last August he wrote something of the tow-boats which became a vital factor in the schooner trade. His mention opens up a vista of the great vanished fleets of sailing craft which swarmed on the inland waters. Some of the curiosities of their rig and registration are expounded.

In an unhonored grave on Port Arthur's waterfront lie the rotting bones of an historic vessel, the tug "Mary Ann" of Dunnville, Ont. Built by the late Senator Mc Callum of Dunnville, in 1867, she bore Register No. 1 of the Dominion of Canada.

Her sister vessel, the "Jessie," both named after his daughters, was purchased in 1896 by the Clergue interests at Sault Ste. Marie, Ont., and renamed "Philadelphia." She is still afloat and doing business.

Both tugs were designed and built to share the puffing labors of the tugs then towing the great fleets of sailing vessels between Lake Erie and Huron. Such craft were giants of their time, and possibly earned grater dividends than any vessels then afloat on the lakes. It was a common thing to see one of the river tugs with a fleet of barquentines, brigantines, and schooners trailing along after them up to six in number. When the wind was favorable, sail was set and it formed up and down the river, as the tows met and passed the grandest scene in the history of water-borne commerce. Pictures of these historic lake scenes may still be seen in the marine offices of Detroit Cleveland and Buffalo.

In the days when competition was keen. I have known them to come as far down Lake Erie as Port Colborne, looking for tows to Lake Huron-a two hundred mile hunt for customers. But when mergers came, they slackened their pace and lay off Bar Point waiting for the vessels. Likewise, in Lake Huron, Saginaw Bay, Sanilac and Sand Beach knew them no more.

The poor old "Mary Ann" did not cut much of a figure in this picturesque pageant, but held her own as an all-round tug, later being acquired by the Long interests of Collingwood who finally sold her to Port Arthur owners. She was shallow draft, with a good beam and a funnel that made her-- with her breadth—look like a big powerful tug, whereas as a matter of more or less fact, she could not "pull a hen off the nest." But in her character of the Dominion's first born, she has her place in our history.

Magistrate O' Connor's comment recall's the fact that the earliest annual list in the Department of Marine at Ottawa only goes back to 1874. Prior to that time Canadian lake shipping had received "British registry" at Montreal. As late as 1910 the three masted schooner Dundee, an old lake "barque" built by Melancthon Simpson at Oakville forty, years before, had "Dundee of Montreal" on her stern. That was because she was first registered there.

The old black scow schooner Stuart which crumbled to pieces at the foot of West Market street, Toronto, when this century was young, also hailed from Montreal, although she had never been nearer Montreal than Ogdensburgh, in the days of the lumber trade. Montreal was where she had been registered after being both by Canadians from somewhere up Alpena way. She exhibited the unexplained phenomenon of he name "Jessie Stuart" at one end and "Lady Stuart of Montreal" at the other. And she was a terror to steer.

The Province of Ontario was credited in the Dominion register of 1874 with twenty "barques," two "brigs," four barquentines, five brigantines, 313 schooners and 211 steamers in all 815 vessels, of 113,008 tons register, 604 of them sailing vessels, of an aggregate tonnage of 86,230. It would be within the mark to increase these figures by 50 per cent., to account for large number of Ontario owned sailing craft registered in Montreal under the old practice and credited to the province of Quebec—or not registered at all, as many of these smaller ones remained in spite of threats and penalties.

Beside, forty-seven schooners, two sloops, one yacht and nineteen steamers, Toronto in 1874 registered one "barque" and one brigantine. The "barques" was the Garryowen, of 279 tons register, built at Kingston in 1863 and owned by Wm. Miles of Toronto. The brigantine was the Queen of the North of 347 tons register, built in 1861 in the mouth of the Nottawasaga River where the famous Nancy lies. Her Toronto owner in 1874 was Henry Jackman.

Incompleteness of such Dominion registration is emphasized by the "one yacht" in the returns. This was the late Mr. George Gooderham's first Oriole. Dozens of yachts were owned in Toronto at this time, but only one was on the Dominion register and the same could be said of many small craft of commerce.

One of the oldest records is Thomas' Register of Canadian and American Shipping on the Great Lakes and River St. Lawrence, published in1864. Major Muir, of Muir Bros. Shipyard and drydock, Port Dalhousie, lent The Telegram a copy recently.

This register accounts for 681 sailing vessels on the lakes at that time, and its light upon the valuation of vessels and the rigs employed is interesting.

A splendid solid oak built barquentine, of 390 tons register with iron straps and knees, the Jessie Drummond, which made ocean voyages then, when she was new, was rated at $19,000. Such vessels sold for $4,000 or $5,000 forty years later and although their present value is close to the vanishing point they would probably cost $100.000 to duplicate. The quality of pine and oak which went into them at $6 and $7 per thousand feet board measure is now worth $60 and $70, if obtainable at all in the size required. The Jessie Drummond was planked with four inch white oak for sides, bottom and ceiling, and five inches in the bilges. She was re-rigged as a schooner and remained strong as a dray horse until broken up on a shoal off Cobourg in 1904.

Of Thomas 681 sailing vessels, 424 were schooners, 157 barquentines, 81 brigantines, 17 sloops, one a barque and one a brig, for all sorts of rigs flourished on the lakes in the days of sail.

Full rigged ships fought yard-arm to yard-arm in the War of 1812,, although that rig disappeared soon afterwards. The schooner has always been the favorite. The first lake sailing vessel the Frontenac, 1678, antedating the better known Griffon of mysterious fate, was of schooner rig, and of schooner rig is the last surviving sailer of the lakes in 1931, the American bottom Lyman M. Davis of Kingston, hailing from the same port which sent out La Salle's first schooner.

While differences of rig mean nothing to the landsman they are easily understood. A ship has three masts, all square-rigged, with yards across. A brig has two masts, both square rigged. A barque has two square -rigged mast and a mizzenmast fore-and-aft rigged, that is, with the sails hinged on behind the mast, instead of crossing it. A brigantine has one square rigged mast and one rigged fore-and aft. A schooner is fore-and-aft rigged on all masts although she may have some square sails too.

A sloop has only one mast, fore-and-aft rigged. There were many trading sloops on the lakes in the days of sail particularly in sheltered waters, like the Bay of Quinte.

"Barques" and "brigs" of the Dominion registers have been mentioned in quotation marks for most of the former were really either barquentine or three masted schooners. A barquentine has three or more masts and is completely square-rigged on the foremast. The others are fore-and-aft. The David Dows, built by Bailey Bros. at Toledo in 1881, was a barquentine with five masts. She was the largest sailing vessel built for the Great Lakes and registered 1,481 tons net.

The typical lake "barque" had fore-and-aft sails on all three masts, but on the foremast she would have in addition a yard from which hung a square-sail, and above that another yard, with a square topsail, and above that again triangular raffees, either singly or in pairs.

The raffee was a characteristic sail of the Great Lakes, and was used on two masted and three masted schooners, which often had no other "square" canvas. It was a three cornered sail the peak or head of it hoisting on the topmast, the clews or outer corners extended by a yard crossing the mast. Sometimes, the lower part of it dropped to a point or points below the yard. It was then called a "diamond raffee". A "single raffee" was a right angled triangle on half of the yard. The "double raffee" was all in one piece but occupied both halves of the yard, or yardarms. Two single raffees, set above a square topsail on either yard-arm, where knows as "batwings". 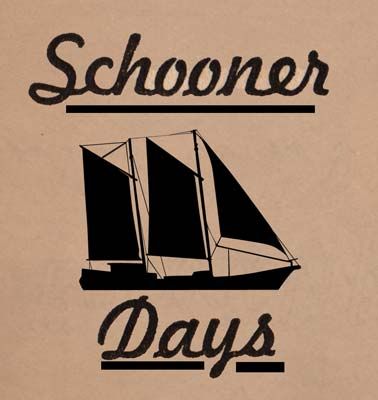