More about Captains Frank Jackman, Sr. and Jr., and the craft they made famous.

Capt. Frank Jackman, Sr., who came back with the Sea Gull and a bushy white beard from South Africa, to the bewilderment of the son whom he had left behind, renewed his youth with the help of a Toronto razor and for years Young Frank sailed with him in various vessels.

Young Frank was ambitious, and the thwarting of the voyage to South Africa which he had undertaken at the age of eight did not daunt him. By the time he was seventeen he took command of the schooner Australia, 14 000 bushels capacity, and made voyages between Toronto and Oswego with barley. One of the Australia’s later voyages was to Fort William with the first locomotive for the C. P R.

It must have been after getting command of the Australia, in 1874, that young Frank grasped the fact that the tugmen were making the money and the schooner men were paying the bills.

That very year he bought a little tug with his father’s help, named her the Young Lion, and prospered with her in harbor towing. In the fall he took her over to Port Dalhousie and had her drydocked and overhauled. On Nov. 28th he was bringing her back to winter in Toronto. In mid-lake she took fire in one of the bulkheads and burned till she sank.

Young Frank and his four men got off in the deckboat. After a long, hard pull with meagre oars in bitter weather, they reached Toronto, almost dead.

The season’s insurance policy had run out in Port Dalhousie,

Back to sailoring went young Frank Jackman; steamboating, too, as mate in the Watertown and Golden City, running excursions “away out” to the Humber from the foot of Yonge street. “Ho For The Humber! bills on the fences used to read, as though it was a world cruise.

By 1882, in his 25th year, Young Frank built a tug for himself. True to his instincts he called her the Frank Jackman, after his father. Everybody who crossed Toronto Bay came to know the green Frank Jackman, with her white bulwarks and blue nameboard With gilt letters.

Many a hundred thousand tons of coal has she pantingly towed into port, dashing out with a great wash of foam as soon as a schooner’s topsails nicked the southern horizon, and returning sometimes hours later with a fore-and-after or three-and-after laden scupper-to with dusky diamonds, or building stone for the City Hall or Parliament Buildings.

Many a million bushels of grain, many a million feet of lumber, the Frank Jackman, too, speeded on its way, outward bound, while Toronto still did a big export trade with Oswego, and “the Cape” and “the Burg, ” as Cape Vincent and Ogdensburg were known.

Twenty-five dollars for the big fellows, in and out, including docking and harbor shifts; twelve for the small fry. This was Frank’s modest charge, and so well was he liked that schooner captains counted it unto themselves for righteousness that they “took the tug, ” even when they couldn’t pay their grocery bills.

“Frank Jackman never jumped on a man when he was in a hole, ” was the waterfront tribute which will live long after the sailor who made his final port-entry last week.

Frank’s right and left-hand man was Charlie Gibbons, his engineer, who had a gift for the crayon and did colored portraits of almost every schooner on the lake.

If Frank was uptown when a schooner was sighted in the lake, or in the bay, “with her fly struck for the tug,” either inward or outward bound, Charlie Gibbons would rouse up the fireman, jingle the bells, and get the Jackman alongside the customer.

If he could not find the fireman he would take the tug out alone, and reinforce his scanty crew from the schooner’s hands.

The signal that a tug was wanted was to lower the schooner’s fly or wind-finder a few feet down the top-mast head, or, if the distance was too great for the fly to be seen, to hoist the ensign.

Schooners never displayed their bunting unnecessarily. They might fly everything on a public holiday or the captain’s birthday, but normally the long whiplike fly was the only decoration worn aloft.

For fifteen years the Frank Jackman, sailed by Young Frank and named after Old Frank, was an institution in Toronto. Young Frank prospered, and became the owner of other marine property, including the schooner E. A. Fulton, which he named after his wife. The Fulton came to an end in the Georgian Bay timber trade. Her owner also participated in the towing and rafting business on the Upper Lakes, He sold the Frank Jackman in 1897 to an owner in Cornwall, and replaced her with the tug Macrae. Another of his ventures was the steam barge Gen. Wolsey, later burned at Cape Croker. For her Frank Jackman and Capt. James Andrew, of Oakville, received a little tug called the Dolphin, some cash, and a topsail schooner named the Restless, which had a curious and rather baffling history.

Frank Jackman knew nothing of the Restless except that she was owned by the Owen Sound purchasers of the Gen. Wolsey. He had heard that she was U. S. Government built, and that she “had capsized and drowned a lot of soldiers.” After that she was purchased in Owen Sound and fitted put for the pick-up grain trade, in which she did remarkably well. He sold her when he got her (this was in 1886) to someone in the Bay of Quinte, and she went into stonehooking.

Owen Sound has a more picturesque tale of the Restless. She was sailed in succession by Captains Hill, Stewart and Nardadt in the Georgian Bay grain trade, and the story was that she had been originally the American yacht Dream.

“Built in Cleveland as the result of a dream she was so named, ” said an Owen Sound clipping. “Her owner with his family of six sailed away in her on a cruise, and nothing was ever learned of what happened to them. The schooner yacht was found floating bottom-up at the eastern end of Lake Erie.”

The marine register gives the Restless as built in Cleveland, 1859; 73 feet on deck, 20 feet beam and 8 feet 6 inches depth of hold; tonnage, 72. Registered in Montreal (as was the case with many Canadian vessels at the time) 1874; owner, Smith; value, $1,500. Collingwood and Owen Sound reports of arrivals at the elevator frequently mention the Restless with 3,000 bushels or so, up to 1886, when she was brought to Lake Ontario.

Next week, as promised, we shall have the details of the Sea Gull’s sixteen thousand mile venture from Toronto to South Africa.

CAPT. FRANK JACKMAN’S SCHOONER E. A. FULTON, named after his wife. The Fulton, sailed by Capt. John Phillips, was wrecked in the Georgian Bay lumber trade about 1900. 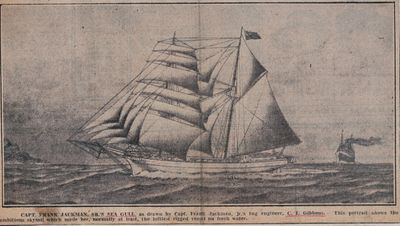