Capt. David Reynolds, for forty years master of Royal Canadian Yacht Club steamers, here continues his yarn of some of his experiences in the schooner Baltic, of Wellington Square.

I THINK it was the spring of 1878 that came earliest of all I can remember on the lakes.

It had been an open winter. They were ploughing in January. I shipped with Three-Finger Jack Andrew again in the Baltic, this time as mate, and we had made five trips to the south shore for coal for Toronto before March was out.

The sixth trip we were going down the lake, flying light, when we got a series of squalls from the nor’ard. The Highlands of Newcastle were just showing up against the north sky when we got the first of ’em. It came down hot and heavy, and we settled away the mainsail.

When the heft of it passed I asked Capt. Andrew if he wanted the mainsail again.

“What d’ye think we bent it for when we fitted out?” he jeered.

“To use it all season,” I said. “If you want my opinion you’ll not see that sail much longer if you give it to her now! ”

There was no “mistering” the mate in a lake schooner, like there is in salt water. He was “sir” to the crew and the captain called him the first thing he could lay his tongue to. As the Old Man spoke the first whiff of the second squall blew his bushy black whiskers straight out in front of his face.

“Settle away that fores'l and reef it!” he roared through his beard. The foremast was new slushed, and the sail came down without much trouble, considering the weight of the wind.

We were running off before it under nothing but the staysail and flying jib now, while we carried the reef-pennant of the foresail to the capstan, and began to haul out the second reef. Before we got well started the sail split in the lazy jacks and the head of it went to ribbons.

“Never mind that sail, Dave!” yelled Andrew suddenly. “Run down your jibs and save ’em if you can!”

He had just caught a glimpse of the third squall on the water, coming up astern, feather white.

We let the halliards go by the run and all hands pulled on the downhaul. We had the staysail and flying jib down by the time this third one hit us, but they flogged about so that both were badly torn before we got them strapped to the boom with gaskets. Then the gaskets of the jib topsail burst, and the sail went up the stay like a parachute. The sheets parted, and it whipped itself to strips.

“Fine mess we’re in,” growled Andrew. “Not a head sail left in the vessel and not more than twenty miles between us and a lee shore.”

“It wouldn’t make much difference the way it’s blowing now, ” I said. “There’s no canvas made that’d stay in the boltropes if it was on.”

We were driving across the lake, under bare poles, turning in slow circles before the wind.

I never knew it to scream so. The rigging did not hum. It shrieked. When she would fetch the wind abeam in her circling she would lie down, with the weight of it on her side, until her lee channels were drowned—and they were five or six feet above her light waterline. Two men at the wheel tried to keep her straight before the wind. But with no sail on her she was out of hand. And to show a scrap of sail meant to lose it.

The sea didn’t make up. It was blowing too hard for that. That would come later. But until dark the whole lake was a lather of white froth, flying a few feet above the water, straight as lines of millions of bullets.

“If I were you," I said to Andrew, “I’d have both anchors ready, and then if she fetches soundings in the dark we can let go. ”

Three-Finger Jack Andrew was as smart a sailorman as ever took a schooner out of Oakville. He had a bite to his tongue which made a man think twice before offering him advice or questioning his orders. I had never heard of letting go an anchor when there was no bottom. Where we were the lake runs to five or six hundred feet of water. But it was my job as mate to see to getting those anchors over and down, and turned the whole crew on to the job.

We pried the starboard bower off the chocks and over the rail, and ranged up fifteen fathoms of chain. The sparks flew from the hawsepipe as the cable ran out, but the chain hung up and down. We gave him fifteen fathoms more, and still the chain hung plumb. Then we got the port anchor over. By this time it was dark. Before the wind blew the lantern out I saw that this chain, too, rode up and down.

I don’t know whether it was the wind or the lake put the lantern out. As I was lowering it over the bows she came up head to wind in one of her long circles, and the spindrift rattled on the glass like hail, and the lantern puffed out with a pop. When we hauled it up there were half a dozen holes in the chimney. If I said that was where the wind had driven the spray through you wouldn't believe me.

Once the two anchors were over the bows, with their long scope of chain, she headed up to the wind and ceased her circling, I have heard of an anchor being lashed to a spar and sail, to form a drogue to help a vessel up to wind under bare poles but this is the only case I know of a vessel coming head to wind on her bare anchors when they were not on the bottom. That's the way we crossed the lake -- stern first, backing off from a screaming wind.

On towards morning a grinding sound shook the boys out of their bunks in the forecastle. It was a cross between a roar and a squeal. It shook the Baltic till her eye teeth rattled. It ceased, and came again, and again. It was the starboard bower biting the bottom. We all turned to and gave her more chain. Then the port one bit, and we gave her more chain yet, easing off, first on one and then the next, until we had ninety fathoms out on one and seventy-five on the other—all the chain in the ship. Then we bent on one end of the manilla towline, new that spring, to the end of one chain, and veered some of that out, bent the other end on to the other cable, and eased away.

It was a tough situation. Where we were we could not tell. Somewhere in the dark on the south shore, to the eastward of the Devil’s Nose. At least we hoped we were to the eastward of that old rocky beak. We got the lead overside, and the tallow on the bottom of it showed sand and gravel; poor anchorage, but possible if our lead of chain and cable was ong enough. The leadline stayed plumb.

The anchors were holding.

The Baltic carried a squaresail, brailing to the mast. “See all clear to give her that squares’l if anything parts,” said Three-Finger Jack, "for our only hope then is to pile her so high up on the beach we can drop off the jib-boom into some man’s front field of spring wheat.”

I squared the yard by the lifts and braced it so as to cant her, overhauled all the brails hooked on the tack and sheet and laid all along to their pins. And I hove in the last inch of the centreboard pennant. With her board up, and light, the Baltic only drew three feet of water.

By this time dawn broke. We were well off shore, miles off, but the surf was rolling up the sandy beach by the acre and looked like distant snowbanks. Far to the eastward we could see the chimneys of the blast furnaces in Charlotte, at the mouth of the Genesee River. Far to the westward poked out the Devil’s Nose. We were somewhere above Braddock’s Point.

Right astern of us, on the shoreline, was a farm house. I figured, as the light grew, that if we had to give, her the squaresail I could poke her jibboom clean into the haymow of that farmer’s barn. The spray, I could see through the glasses. was watering the new rhubarb plants in the farmer’s garden.

The Baltic bucked and dived and soared and leapt like a mustang; but the anchors held.

What saved her was the new towline, doubled. It was elastic, and the spring of it prevented a direct jerk on the chains yet even it went bar-hard when she would ride high on a sea and try to spear the clouds with her jibboom, and as it tautened the water would spin from it as though it was a bursting hose, and it would hum like a harp.

All day we rode it out that way, stitching, stitching, stitching, on the torn headsails. By dark two of them were ready, after a fashion. The wind, lulled down and backed into the sou’west, coming off shore for us and giving us a smooth. We began heaving up at daylight next morning, after bending on the headsails by lantern light. It was noon before we got the last of that everlasting chain in and broke out the anchors, but after that it was no time, almost, before we were striking the fly for the tug to take us up the Genesee to the coal docks.

THE “ERIE BELLE,” A LAKER WITH FIVE JIBS

Some time ago this “column” asked if anyone had a picture of the Erie Belle, published under the caption “She Shall Have Music Wherever She Goes.” Here is one through the kindness of Mr. Norman Jackman. The Erie Belle had little gilt bells at the trucks or extreme tips of the masts. She was also unique among vessels in the five-triangular pieces of head canvas shown. Whether they were five “jibs” or not is one of those arguments of the waterfront which will remain undecided till the crack of doom. The five sails were known as jibtopsail, flying jib, fore topmast, staysail, standing jib and fore staysail—all “jibs” in shape and use, but only three of them jibs by name. 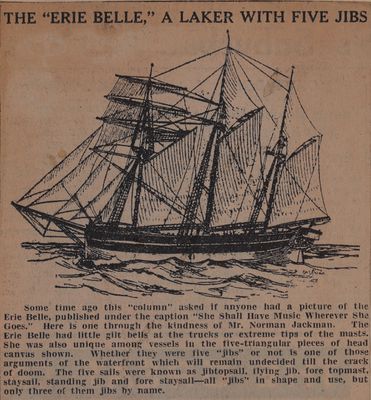