Safe comes the ship to harbour

Through billows and through gales,

If once the great Twin Brethren

Sit shining on her sails."

Continuing his early experiences before-the-mast, the late Magistrate J. J. O'Connor, of Port Arthur, left an account of an early acquaintance with St. Elmo’s fire—and a ducking. The Romans must have been familiar with the former phenomenon at least, on the Mediterranean, for according to Macaulay and Horace alike, they attributed the corposants to the beneficent presence of Castor and Pollux.

One evening in the Fall of 1872, after loading a cargo of wheat at Oshawa at the then existing pier—there was no harbor protection—we got away in the "Magdala" in a fresh westerly wind bound for Oswego.

Oshawa being, as I said, quite without shelter at this time every vessel which went there to load or unload did so in fear and trembling, and cast off her mooring lines as soon as the last bushel of grain was shovelled, whether the wind was fair for her voyage or not. Rather than pound to pieces at that exposed pier they often left half loaded, and even untrimmed. That was how the Kate got ashore on Raby's Head. The wind came in when she had the forward half of her hold full. Her skipper telegraphed for a tug, waited as long as he dared, and finally, to save the schooner, made sail and tried to work offshore with the vessel trimmed by the head until her bowsprit was level. She wouldn’t steer for him. He could neither come around nor pay off, and she drove in on the beach stern first.

We too left Oshawa in a hurry. As we dropped off from the wharf we had the yawl boat in tow, the wind having come up so suddenly that we did not have time to get it to the davits. By the time we got canvas on her the wind and sea had increased to an extent that made the swinging up of the yawl boat a difficult and more or less dangerous undertaking. We no sooner had it lashed at the stern davits than we had to begin to reduce sail. First the gaff topsails and jibtopsail, the latter of which I was assigned to furl. While it was still light and I was out on the end of her long jibboom I could look back and see a clear open space under her fore-foot as she jumped in the rapidly increasing sea.

I was next sent to furl the main gaff-tapsail with young Billy McAllen, to assist me in riding it down. It was a man’s job but we managed it and descended to the deck, only to receive orders to take in the mainsail and flying jib. And so the Magdala bore away for Whitby for shelter.

When we were about two miles off that port the blackness of the night became so intense that it was quite impossible to the hand before the face or discern anything.

I will tell you how black it was. We had squatted the foresail down about halfway, and the area of it left was a mass about forty feet wide and thirty feet high. As big, at any rate, as the side of a house. Two or three times that sail had jibed across the deck, with a bang fit to tear the foresheet-post out by the roots. I was standing at the starboard main rigging, within forty feet of the foresail at the farthest. The skipper called to me from the quarter to ask which side the sail was on. I was unable to tell him, as I could not see it. I began to grope with my hands for the foresheet to tell by the way it led which way the sail was set.

Suddenly I saw the whole thing in every detail, as plain as day.

The sail, bellying out on the port side like a bursting balloon and the whole deck, was lighted up from above. I looked aloft and saw the strangest sight I had yet seen in my sixteen years of life.

Like all lake schooners, the Magdala carried a fly above her main-topmast truck. This fly was a cone of bunting, three or four yards long, tapering to a point and kept open at the wide end by a wooden hoop about a foot in diameter. This hoop was called the eye. A bright new fly of red or blue and white at a vessel's truck always looked smart, but its purpose was less decorative than useful. The fly was the tell-tale or wind finder, just like a wind-sock in an airdrome or at the rifle ranges.

Right in the eye of the Magdala's fly, when I looked aloft, blazed a cold white lamp as big as a floodlight, I had never yet seen an electric light globe, but that is what I would now compare it to.

And like other globes, at regular intervals, all the way down the topmast rigging of both masts, from the eyes to the crosstrees, and on the topmast stays and triatic stay, and out on the ends of the crosstree legs, balls of pale cold light burned.

Not in flashes, but in a steady glow, moving from place to place, but seemingly favoring points, such as the topmast trucks and crosstree ends.

I was not alarmed, but I was utterly confounded, mystified. I was beginning to learn to keep my eyes open and my mouth shut, so I asked no questions. But Jimmy McAllen, Billy's brother, was mate in the Magdala. and we had all been boys together in school in Whitby. Jimmy was a few years older than I, and I had risen to be mate of a good vessel, but he was not above offering explanations.

"Corpse-lights," said he. "Not as bad as they sound. Corposants. St. Elmo's fire."

"What makes them?" I asked.

"I don’t know what makes them, but they come when the air is very heavy with electricity, and they don’t do any harm. I’ve seen them before, in the eye of the fly sometimes, on a bright still clear night."

"Some think they're lucky. At any rate they’re lucky enough to show us which side the fores'l's on, so it won’t batter our brains out swinging over in the dark."

Poor Jimmy! Forty years later, almost, he was still going mate and helping greenhorns. He found a watery grave in Lake Erie in 1909 when he was mate of the schooner Van Straubenzie, and a tearing passenger steamer ran her down, although he had his side lights going and burned flares as well, to warn her off.

Neither Jimmy McAllen nor any of us knew as much about electricity that black night off Whitby as we do now — though that’s little enough, even if it is commonplace. But the theory of St. Elmo’s fires, which are often seen on the lakes and sometimes at sea, is that they are a short-circuiting caused by the points of the spars and shrouds contacting with heavily charged currents of air. They are not lightning-bolts and burn without heat. All this time they were shining in the Magdala, there was no thunder, no lightning, and no rain. Just a dense pall of darkness all around.

We were by this time close in with Whitby, but either owing to the darkness of the night or the glow of the corpse-lights there was no making out the lighthouse on the west pier, so Capt. Farewell decided to square away for Toronto. Three hours later we arrived under the shelter of Toronto Point and ran well in and let go a riding anchor and set a double reefed mainsail.

The gale raged all the next day and the next night. At about six a. m. on the following day, while it was still dark, the wind shifted into the southwest and came down on us —and the big fleet of vessels riding there in corner of Humber Bay—like a crack out of a gun. It was a lively time getting away, keeping from fouling one another or driving ashore on the Island sandbar. The piece of the mainsail which we had set to ride by helped as we bore away, on the port tack, which permitted clearing the Point.

During our getting away from the anchorage I had an early morning bath that would cleanse an ordinary sailor for a whole season. She had one of the old-fashioned wooden anchor stocks and I was over the bows and down on it engaged in passing the ring stopper as she was plunging into the sea, which had already begun to run in with the new wind. In one of her dips I was completely submerged— drenched to the skin and laughed at when I came on deck.

We got away clear of the Point on the next tack and away in good shape, and went down the lake in a ripping sou-wester that gradually-veered into the N. W. and "bye and bye, she blew some more."

Oswego in those days was an unprotected port, there was no outside breakwater as there is now, we had to enter through comparatively narrow piers through which a stiff current met the oncoming sea caused by the gale behind us, creating the nastiest kind of rip right at the entrance. It was difficult to steer vessels here and dozens have gone on the beach under Fort Ontario, just east of the piers. This was the final ending of the Wood Duck, the Ariadne, the New York, Albacore, Baltic, Caroline Marsh, Daniel G. Fort, Flora Emma and other schooners of early and later days.

The further difficulty in going into Oswego was the fact that there was no anchorage even when you got in. One might as well throw one's hat over the side as an anchor. The bottom of the harbor was flat rock.

On approaching Oswego anchors and catheads were swung in board as useless, and mooring lines were made ready to smoke on timber heads. In gales we had to depend on what the tugs did for us—which was not very much. After the tug combines, instead of coming out and taking us in tow, they laid just inside the stone lighthouse stern out, and drifted alongside to take our lines as we were plunging past.

On this occasion ours—as were all the arrivals of the rest of the fleet that day—was an epic entrance. The bridge crossing the river was black with people, while the rigging of vessels inside were full right up to the crosstrees, with men watching the entrance of each individual in the oncoming fleet. Many of them had close calls, but all made it this time in good shape, and that night the harbor was a forest of masts that filled every available space along the wharves and contained many happy crews.

The corpse-lights were a good omen. 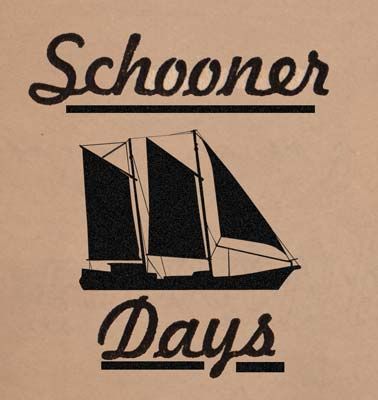