THE ALLIANCE, mentioned in last week's Schooner Days, was not by any means the only windjammer to bear the nickname "Bull of the Woods." This was a favorite form of endearment or otherwise indulged in by the boys who had to sweat at the wheel or wrestle the towline in lake craft of roving tendencies. Capt. Johnny Belyea's Gulnare was nicknamed "Bull of the Woods," and another, and possibly the last so honored, was the Reuben Doud.

The Doud was a late comer on Lake Ontario, and did not stay long. She was responsible for the greatest outburst of scintillating wit Toronto waterfront ever produced, when she first appeared; as follows:

This may be Greek to the landsman, but it is all true, including the squaring of the triangle. For evidence see the photograph. The squaresail is a running sail, usually quadrilateral in shape, hanging from the yard on the foremast. The Reuben Doud had one of these useful appendages, but hers was abbreviated by having the "goosewings" or lower corners cut off. It made it much easier to handle, for there was only one tack to trim, and that was left standing. It was either Capt. Joyce of Bronte or Capt. Ure of Toronto who evolved this labor-saving square-sail. Of course, it did not have the driving power of the larger pattern of sail.

The Reuben Doud came here in 1901 to replace the Augusta, belonging to Capt. Alex. Ure and the Conger Coal Co. lost at Port Credit the preceding year. She was then, as they say, "well able to vote and draw land." She was built about 1873 on the banks of the Wolf river which flows into Green Bay, on Lake Michigan. There and then she achieved charter membership in the Supreme Order and Exalted Sylvan Bovines. She stuck. A team of forty oxen had to drag her off the bottom and down the creek to Green Bay. It was one grand procession, those forty pairs of horns tossing in tune to the clank of trace chains, while the Reuben Doud's round bows pushed a widening ripple down the creek, but they all got to deep water in time. The schooner was nicknamed the Bull-of-the-Woods from the moment of her ox-power voyage, and worthily did she live up to it.

Reuben Doud is unknown. In Austria he might have had a claim against whoever fastened that name on him at the font, but he was doubtless a worthy citizen of Wisconsin, notwithstanding.

His namesake was fast, despite her chuckle-headed appearance; a grand carrier, and built of the best white oak, tough as whalebone; but she had more facility for getting into trouble than twin monkeys.

She could sail! And how deceptively! Once when I had the little Frou Frou I saw her coming up the lake with a southeast breeze. She seemed glued to the scenery; sails all full, a roll of white ahead of her hawsepipes. But no more appearance of motion than the Ancient Mariner's ship on the Line. I rather fancied the Frou Frou, because we could beat all the stone hookers, and so we stood out and rounded to under the lee of the Reuben Doud, and tried to sail parallel with her. We were lifting and falling in the swell and making good time; with no apparent motion the long black hull of the Reuben Doud slid past us as though we were going the other way! We jibed over, hauled up, crossed her stern, and came out on the weather quarter of her, where we had our wind free - and she just kept on motionlessly sailing away from us. Then we cracked on the big balloon jib topsail and the mizzen staysail in the Frou Frou - but the Reuben Doud went into the Eastern Gap ahead of us.

The Reuben Doud was a smart vessel, but behaved like her name and nickname combined.

The way she got to Toronto was this: She had been trading on the Upper Lakes all her life, and in the fall of 1900 came to Lake Erie for a load of coal. She got caught in a fall gale, and lost her mainmast and mizzen; made port somewhere, and arranged for a tow to Detroit.

They started out, and it came on to blow again, and the steamer had to cast her off; she still had her foremast, and could carry sail on that sufficient to get her into shelter. But in her jibing over her foresheet post carried away; and a schooner with her foresheet post gone is in a very bad fix indeed; there is no place to make fast the sail she needs most for running. The Reuben Doud fetched up on the Middle Ground at the west end of Lake Erie, and if she hadn't been strongly built would have broken up under her crew. They had to take to the rigging. She held till the gale blew out, and a salvage tug finally got her into the river.

It was in Detroit or Windsor that Capt. Alex. Ure bought her for the Conger people. He had his share of purgatory refitting her with a crew of shellbacks he brought up from Toronto, but at length he got her here, with a mainmast shorter than her foremast, and several other eccentricities marking the difficulty of re-rigging in the vanishing days of sail and sailors.

The bull-of-the-woods browsed along Lake Ontario for a couple of seasons, then broke Alex Ure's heart by a performance which takes a lot of beating.

She left Charlotte with a fair wind from the southward, smooth water, and smoky weather. The captain set his course for Toronto, and the sailor whose trick it was at the wheel - Cunningham was his name - steered it like a good fellow. But the bull had a mean trick of shying to windward in the puffs, and once they got above Braddock's the puffs came harder and faster. This hinting took her inshore all the time, and the first thing Capt. Ure knew she fetched up smack on the bottom - a long way out, for the lake shoals gradually there, and the shore was still invisible in the smokiness of far-off forest fires. She had committed the greatest crime in the nautical calendar - stranding on a weather shore.

Capt. Ure himself threw off the turns of the mainsheet and let the boom go to the rigging with such force it parted the after-swifter; but the Doud was too hard and fast aground to be budged that way.

So he sent to Oswego for a salvage tug. They jettisoned some of the coal and pumped her out and got her off, and towed her back to Charlotte, leaking. The only hole in the entire Genesee River the Reuben Doud could choose to rest was in a deep spot dredged out to let the steamer North King turn. Any place else in the stream she could have settled down on to the bottom and still keep her decks dry; but nothing but the North King's swimming hole would suit her, and she filled and sank till nothing but the top of her cabin showed.

That meant another heartbreaking battle with steam pumps and more heart breaking expense. The bull was floated finally, and came home smeared to the eyes with bills and river mud. The clayey mess stiffened and caked all over her, like paint, and the bills drew like mustard plaster's; $500 rent for a hawser that was never wet, and so on. Trust salvagers to charge.

Capt.Ure quit her soon after that. He was fed up, and with reason. Capt. Joyce, of Bronte, tried his hand at what Tommy O'Brien elegantly described as the "damned omadhaun." Like Capt. Ure he was a good sailor, but Noah himself couldn't have kept the Reuben Doud out of trouble.

On the 27th of August, 1906, she was coming up with a gale from the eastward. This was just the next trip after our little brush with her in the Frou Frou. She was under shortened canvas. At night the wind lulled, and she lost steerage way as she neared the Eastern Gap. Then, as now, there was a shoal at the entrance. With all the lake to pasture in the becalmed bull had to roll on to this shoal. She touched and jolted her rudder from the gudgeons; then she swung off and quite out of control, drove in on the shore half a mile up to the westward of the lighthouse.

Had it been any other vessel she would have got off in the morning by throwing overboard a few hundred tons of coal; but with true bullheaded luck the Doud had a freshening of the wind. The gale regained its full strength, and Capt. Ward and his lifesaving crew came out to the rescue of Capt. Joyce and his wife and the stable-boys, so to speak, of the bull aforesaid. All day the gale raged, and the squatted foresail and loosened squaresail slatted and flogged, and the bulwarks burst out, and a section of the schooner's quarter was washed away. By the next day she was a complete wreck; her spars stood, but she was not worth salvaging. Beach-combers made away with much of her, and she soon disappeared, but her bottom is still there in the sane opposite Ward's Island. 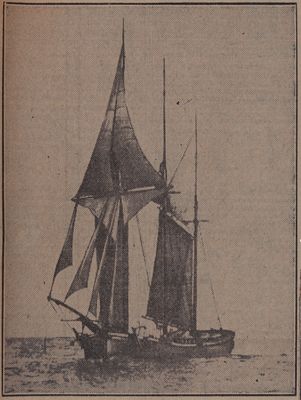