HERE is another picture of Sodus, on a hot June night a hundred years ago and more, from Miss A. Isabella Cook's "Pioneer History of Sodus Point, N. Y.":

"From the outbreak of the War of 1812 the frontier villages had suffered a sense of insecurity. Government stores were kept to some extent at Sodus Point. In the spring of 1813 a considerable force was stationed here in the anticipation of attack. On the 15th of June it was reported that the British had landed at the Genesee River and would undoubtedly attack the Point. Portions of Colonel Swift's regiment and Major Rogers' Battalion were immediately ordered there for defense. They remained until Saturday morning, June 19th, when no enemy appearing the companies were dismissed, a guard being retained for the military stores which had been removed to the woods west of the village.

"That same day in the afternoon five British vessels appeared in sight. Some men on horseback were sent to recall, if possible, the companies which were going home and rally the citizens generally. One of them rode to Sodus Village and swept along the Ridge shouting: "Turn out! Turn out!" The other messenger rode southward following the retiring soldiers, riding fast, blowing a horn and shouting: "The British are landing!" The alarm recalled some of the militia who were on their way home, but many of these men were simply citizens with no military training.

"At the Point there was no organization. Rev. Seba Norton, who had seen service in the Revolutionary War, was looked to as leader and captain. A little later Captain Hull reached the Point and the command was yielded to him. The area of cleared land at the Point was not then very large. A thick dense growth of trees and brush extended up to and covered most of what is still the public square. The night was very dark. It had been cloudy and raining a little during the day. It was impossible to see a yard in advance.

"The line was formed as regularly as it was possible to do so near the woods. It was agreed to march over the rise of ground towards the water and if the enemy were in superior force to deliver the fire and then retreat; nor was it expected that the company would maintain its line in that event. It was to be each for himself."

The movement thus decided upon was executed at or near midnight of this hot June night before the Sabbath began to dawn. Marching up the street past the Mansion House tavern they reached the high ground along by Wickham's store and the Johnson House in Sodus Point the present time. They found that the British had landed and were advancing. This was known by the noise and a few lanterns carried by the enemy. Their light showed a force supposed to be 300 or more marching in order up the slope from the water's edge.

Amasa Johnson, from the American line, fired and shot down one of the lights. Instantly was heard the command of the British officer: "Fire!" And a volley followed. Many of the shots passed over the heads of the American line, as was an agreeable custom on both sides in the War of 1812.

But Asher Warner and Charles Terry were mortally wounded and several others were struck. The flash of the British guns had revealed their position and the Americans, with "well directed aim, poured a deadly fire into the enemy's ranks. The battle was over." So says the patriotic historian and others heard that the British had seven killed. Commodore Yeo reported no casualties.

Both parties retreated for very good reasons. The Americans had already resolved to do so and the British could form no idea of the force in their front. In the darkness of midnight it would have been the height of folly to advance. They went back to their boats.

The next morning the British vessels—they were possibly the Wolfe, Royal George, Moira, Beresford and Sir Sidney Smith — opened a cannonade and landed a small force. The landing party was a detachment of the 1st Regiment or Royal Scots Regiment. Five or six men proceeded to set fire to the tavern house, a dwelling house and two storehouses, the latter on the margin of the bay. While the buildings were in flames the soldiers fired a gun into each and gave three cheers and hurrahed for North America, indicating that the Royal Scots were "unco' happy."

"They seized the stores in the warehouses and then set all the buildings on fire but one, the tavern of Nathaniel Merrill. The store of Captain Wickham and its contents, his dwelling house, the Fitzhugh house, the house of William Eddes (or Edus), two warehouses and several other buildings were totally destroyed. The house saved was one that had been recently erected by Barakins and Hoylarts. It was the Mansion House tavern of later years and was destroyed by fire in 1881. Asher Warner was picked up by the British, mortally wounded, and carried into this house, and there died. It is said the British placed a pitcher of water near him, and that the officers twice extinguished a fire kindled by their men to destroy the building." Until the Mansion House was burned a great brown stain on the planks of the ground floor was shown as marking where one of the two Americans killed in this battle of the flour barrels bled to death.

"The destruction of the village was witnessed by Timothy Axtell from Margaretta Grove. He saw the capture of the flour by rolling it out from the upper floor of the warehouse without lowering it. Barrels that broke were left. Most of the supplies had been carried back into the woods or the low ground between the present site of the Episcopal Church and Lummis Hall, now the Roman Catholic Church, little wooden buildings that now group around the tiny town square.

"The family of Colonel Peregrine Fitzhugh (he himself having died in 1810) passed the night in great suspense. Living on the hill overlooking the bay a mile south on the farm, now belonging to the Sill estate, they had buried or secreted all their plate and other valuables and hung bed quilts over all the windows to prevent any ray of light finding its way out. The widow, the children and the servants had no sleep that night. The next morning they saw the smoke of the burning village darkening the sky. "

Captain William Wickham, prior to his settlement at Sodus Point, had been in the United States Navy. At the time of the burning of the village he was absent on business in New York until the first of July. In the afternoon of June 19, 1813, by direction of Captain Merrill, Mrs. Wickham had left the house and some of the American guard were quartered therein. Previously on the same day a part of the public property was removed from the storehouse about seventy-five rods west of Mr. Wickham's house to the upper end of the village in the woods.

"On the Sunday afternoon that the buildings were burned the enemy sent a flag of truce on shore saying if the militia would give up the remainder of the public stores they would not destroy any more private stores. General Burnett, commander of the American forces, replied that they must take it at the point of the sword or the strength of powder. The British then retired."

It was by this flag of truce that some American was told that seven British had been killed. Sir James Lucas Yeo, the British commodore, mentioned no casualties. He made little of the whole affair, which scarcely redounded to his own or anyone's glory. "On the 19th, " he wrote, "I anchored off Great Sodus, landed a party of the 1st Regiment of Royal Scots and took off 600 barrels of flour and pork which had arrived there for their army. "

The attack on Sodus was a retaliation for the attack on York when this infant city of Toronto was captured and plundered by the Americans, April 27, 1813. It was regarded with misgiving. "There is some regret expressed," wrote Hon. Wm. Dummer Powell to Sir George Prevost from York on June 28, "that it became necessary for the Commodore to destroy the town of Sodus, from the apprehensions that this place may be the subject of retaliation."

It was, and promptly. On July 31 another Sunday, as it happened, fourteen armed American vessels in Commodore Chauncey's fleet reappeared off this infant capital of Upper Canada, and three of them came into the harbor. The place was defenseless after the previous sack. The Americans burned the barracks and public storehouses which they had left standing in April, and carried off five guns and a quantity of shot and shells and five hundred barrels of flour which had accumulated since their last coming. Toronto had its counterpart of the Rev. Seba Norton, perhaps, in both attacks, in the person of Rev. John Strachan, later Bishop of Toronto, with a palace down on Front street. Dr. Strachan's tongue was a better weapon than Mr. Norton's sword. It was through his wisdom, eloquence and force of character that the town was saved from complete destruction on the two occasions upon which Commodore Chauncey visited it.

Hospitality of the people of Sodus to British "invaders" in 1939 makes the Rush-Bagot Agreement to banish navies from the lakes understandable. That agreement, working well for a century, has been a better business deal than the two-year duel between Commodore Yeo and Commodore Chauncey with their burst flour barrels and bloodstains on the floor. We may take pride in having been one of the two peoples to ratify that Agreement; and still more pride in having made it with such people as the good folk of Sodus.

Only Survivor of First British Visit to Sodus

Heart of this house heard the Royal Scots shouting- "Hurrah for North America!" as they burned Sodus 126 years ago. 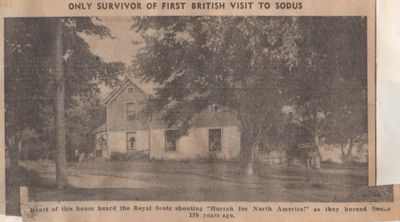