TlME does fly fast! It seems as though it was only last fall that a ruddy-complexioned lady walked into the office of Schooner Days, thanked him for what he had written about the schooner New Brunswick lost in 1859, and added that she, the lady, was a deep-water diver and hoped to salvage the ship or her cargo. She had been up in an airplane and found the wreck, or the location of it, in Lake Erie, had buoyed it, and was going to raise it.

It seems like last October that this happened, but it was actually five years ago. The lady was Mrs. Margaret Campbell Goodman, and she was all that she said she was, but the salvaging did not progress. November storms set in and law-court storms threatened to follow. Ship and cargo had then been lost for seventy-five years, but the mere prospect of finding them produced threats of litigation from claimants unsuspected until the find got in the papers. Mrs. Goodman made some further surveys and satisfied herself about the location of the wreck, and expected to go on with the work in the following spring. The winter passed, no more was heard of the project, and she was just a pleasant memory.

This week she and the New Brunswick came to mind—and it was five years later!

Some readers may not have heard the New Brunswick's story, and some may have forgotten in five years. So here it is again, recalled by a Chatham dispatch.

This said that Newton Eberts, 85-year-old son of Henry Eberts, of Chatham, owner of the New Brunswick when she foundered, had "forbidden the banns," so to speak, in any salvage operations until he was satisfied.

This was not in itself news, for Mr. Eberts had said as much five years before, to Mrs. Goodman. But this summer he was saying it to someone else — which would indicate that the proposed salvage was not a forgotten dream, but a materializing reality. It was said that an expedition had been organized by Joe Ley, of Leamington, who had chartered the fishing tugs Beverley and D. and H., owned by Herbert Goodison and Bruce Lamarsh, to drag the lake in order to locate the sunken vessel.

Schooner Days connection with the new salvors is of the slightest, being confined to talking over the radio telephone last December to the fish tugs Beverley R. Goodison and B. and H., in the middle of Lake Erie, when making a late passage with storage grain in the steamer Robert P. Durham. They were sampling Lake Erie's snowsqualls thirty miles ahead of us as they lifted their nets.

Mr. Eberts was said to have put up the "No Trespassing" sign again in these words:

"Nobody has secured any permission from me to attempt to salvage the wreck. I know Mr. Ley, but I have not heard from him in five or six years. He has not asked permission. I am the owner of that wreck and its cargo. They must keep off that boat until they have first talked to me. If they interfere with that boat without my authority the marine law will get after them, and marine law is pretty strict. "

Mr. Eberts is right about marine law being pretty strict — in spots — but the trouble is in finding the spots, which are sometimes as elusive as the location of a wreck.

At the time of writing there should be little immediate difficulty in "keeping off that boat," for the difficulty in getting on it, buried in sand under the surface of Lake Erie, has baffled everybody for eighty years. In fact just where she is is known to very few.

The New Brunswick is said to have foundered five miles from Wheatley, Ont., in 1859. Wheatley is a little inland from Lake Erie, on the highway, and on the county line dividing Essex from Kent, north of where Point Pelee pokes its long, sandy finger into the lake.

She had loaded a cargo of timber at Wallaceburg, on the Thames, in August. The timber was white oak and black walnut, in logs or squared sticks. The oak was in the hold, and was therefore probably squared. The walnut was on deck, secured with timber chains passed from side to side. The cargo was consigned to Montreal, and may have been intended for forwarding to Europe, either in the New Brunswick or in some larger vessel. The New Brunswick had already made at least one Atlantic passage. She is said to have crossed in 1847 with 18,000 bushels of wheat from Chicago to Liverpool, the first trans-Atlantic grain cargo from the Great Lakes.

W. Jago of St Catharines was listed as her owner in 1856, and Henry Eberts of Chatham in 1859. With his brothers, Walter and William, Henry was an outstanding ship owner and exporter of timber. One of their vessels, a brig or brigantine called the Eberts, was wrecked at Toronto. The grandfather of the Eberts brothers was a Capt. Baker, who entertained Tecumseh in his Thameside home and built some of Procter's ill-starred gunboats, sunk near Chatham.

When the New Brunswick sailed for Montreal with her heavy cargo so long ago she was commanded by a Capt. McTavish and her first mate was "Buff" Warren. She entered Lake Erie with good weather, but this did not hold. Twenty miles east of Point Peter [Pelee] she was caught in a storm which was too much for her, and ran back. East of the Coatsworth dock in Romney Township in Kent, which is about five miles east of Wheatley, she went down. "Down" is not far in Lake Erie, which is only a hundred feet from top to bottom. The New Brunswick sank in shallow water, and not far from shore, perhaps three miles out. Caleb Coatsworth, father of C. S. Coatsworth, Chatham lawyer, often told the story of the wreck. Three of the crew got safely ashore on a raft made from broken spars. A yawlboat put out to rescue the others, and took them all off, but the negro cook died from the cold and the wet, as they were bringing him ashore. The vessel's hull was submerged, but her three masts showed high above the water. Newton Eberts himself, as a child of five, saw them sticking up out in the lake. People pointed them out to him — perhaps his father. They got a range on the wreck, lining up a window in Meredith Dawson's house and a tree on the homestead. But when the spars fell the range proved too wide, at three miles distance, to enable the fishermen to find the wreck, as she had bedded over with the sand, as have hundreds of wrecks in Lake Erie. The whole lake is a sandy graveyard.

The deckload of walnut probably washed away and rolled up on the beach or was buried in lake sand. Walnut logs sold for 50 cents to a dollar apiece then, according to straightness, and no great store was set on them. The white oak in the hold probably stayed there, held by the settling silt. It was valuable eighty years ago, and would be more valuable to-day, for submersion does not spoil white oak but rather toughens it and hardens it.

On the rights of Henry Eberts' heirs to the timber if it could be recovered, only a court can pronounce. But from the venerable Newton Eberts' renewed warnings it would seem that he believed that his neighbors of the fish tugs had, after all these years of looking for the lost wreck, "got something." Let us hope that all concerned, including Mr. Eberts and the potential salvors, make money out of the find. One estimate of the value of the white oak of the New Brunswick to-day places it at $13,570 and another at half a million.

THE WINDS THAT BLOW HOT AIR

Sir, —Movie fans who enjoyed the elevating and almost spiritual tonic of a tale of schoolboy life on the screen of a Toronto theatre this week had also to listen to a most abominably fullsome glorification of the American sailor-scientist, Matthew Fontaine Maury, whom the American announcer represented as being the first and only investigator who had discovered anything definite and useful about ocean winds. He forcibly represented that present day navigation in its degree of safety was made possible only by the skill and patience of Maury, and followed that by the trifling claim that only Maury's work and discoveries have made the ocean cable and the aeroplane practical utilities, and went a step further to explain that Maury's investigations of land winds made modern prairie farming what it has grown to be.

There is no one to dispute assertions by screen announcers, and all this probably goes down like milk with the average non-technical public. The only hope is that they forgot Maury and the winds in the glory of the feature picture. But as a man trained in one of the prominent nautical colleges in England, followed by honors in meteorology, and several years' experience in all the oceans of the world, I can only say that Maury himself would have disclaimed sixty per cent, of what that announcer claimed, and he would also have disclaimed any association with the pictures of ship life into which modern movie faking had plunged him. As a sailor of old, I enjoyed the fantastic representations of Maury's ship in a storm, and also enjoyed a brief sight of a ship in one of the sets which was about a hundred years ahead of its time as to rigging, and at best it would be a freak in any age.

But when everything is claimed for Maury, that great investigator, Sir Frederick Beaufort, is overlooked, and much of his work was finished before Maury commenced. Beaufort reduced wind force to a scale, called after his name, which has been of incalculable value to sailors and meteorologists, afloat and ashore, to this day. I cannot go into lengthy technical particulars, so let us pass on to another wind investigator, Buys Ballot, the Dutch meteorologist, who gave us the Law of Storms, and the relation of wind to the isobars. It has been the chance of fate that I have passed through some of the worst storms God ever sent over the face of the waters, but I cannot remember that we ever called upon Maury for assistance. But we did put our trust in, not God alone, but in Beaufort and Ballot. Particularly Ballot, for he had taught us how to determine the position of dangerous calm centre of a cyclone with its terrific tumbling seas, and how to set a course to sail away from that perilous vortex. Nor can I remember, when as a boy in nautical college in England, lectured to in class by renowned professors of meteorology, that they ever impressed us with Maury's theories in any degree like those of Beaufort and Ballot.

If movie fans are not technicians they had better take a little salt shaker along with them when they visit the show, and perforce have to listen to glorifications of great Americans, most of whom would turn in their graves at all the bunk plastered on their memory. 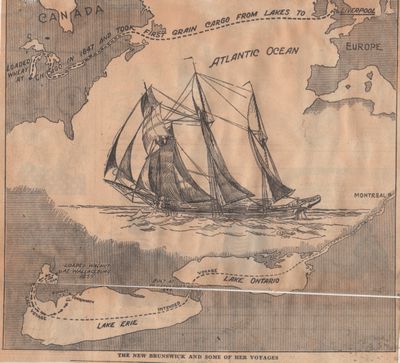