THERE was one rig we evolved on the lakes, which like the esteemed mule, had neither ancestry to boast of nor posterity to encourage. This was generally called the Grand Haven rig, although whether it began there, on Lake Michigan, or at Benton Harbor, on the same lake, is a disputed point. Lake Michigan is credited with originating it, and it was used everywhere between Chicago and Kingston.

Like the story of the origin of the schooner name, the tale of the Grand Haven rig's discovery may be quite apocryphal. It is always told that one of the Olsens or Larsens or Nelsens, fitting out his three-masted schooner one season on Lake Michigan, found his mainmast so rotten that he hurriedly sawed it through and left the stump in the deck and the upper part on the dock, and sailed off without it. So great was his haste to get away with a fair wind for the good freights of the early spring.

He found that not only would his vessel sail quite as well as before, with a fair wind, that is, one behind her or on the beam or quarter, but she actually worked to windward better with only her foremast and mizzen left than when she had a mainmast. So there was a perfect epidemic of mainmast-lifting up Michigan way, and out of Benton Harbor and Grand Haven there were more "three-masted" schooners with only two masts than there were with three.

I have seen them in the Chicago creek, up to twenty years ago, fine big schooners, with a tall foremast in the bow and a tall mizzen at the stern, and nothing in between except the foresail, coming aft to amidships, and a mizzen staysail, coming forward to the foresheet post. Of course there would be gafftopsails on both masts, and a long range of jibs, and usually a raffee, forward, and sometimes a squaresail.

Theirs was no makeshift rig, the result of a decayed mainmast, but a deliberate resparring, apparently quite successful. The mizzen was quite as tall as the mainmast would have been. Such a vessel is the J. V. Taylor, portrayed by Mr. J. W. Bald's fine photography, in Midland. She long traded to the Georgian Bay, in the grain and lumber trade. The pictures show her triangular raffee and her squaresail, hanging from the yard to weather of her foresail.

Another exponent of the Grand Haven rig which I knew as a boy was, the John Magee of Buffalo, then owned in Canada, and trading here to Toronto from Fair Haven. She was manifestly a converted three-master for her mizzen was small, much lower than the remaining foremast and her jibboom had been shortened. She sailed remarkably well. Very strangely, in light airs with the with the wind right aft she used to give the Stuart H. Dunn a very hard race; and the Dunn was a full-rigged three-master with a square topsail and batwings and a larger vessel. When it blew fresh the Dunn would always beat her.

Saltwater men might claim that this Grand Haven rig was merely a ketch rig which they had been using for century, but the claim would not be just. The ketch rig has never, to my knowledge, been tried on vessels of eight and nine hundred tons deadweight carrying capacity anywhere, and I have never seen it used on the lakes for commercial purposes. It is confined to yachts, fishing smacks and small coasters, only in Mediterranean and British waters. It is also used on the St. Lawrence for coasters.

Nor have I ever seen, in the Mediterranean or around the coasts of Britain and Europe, or the Gulf of St. Lawrence, a ketch with a standing mizzen staysail. In all that I have seen the mainboom comes so close to the mizzen mast that there is no room for a mizzen stay (except a jackstay) and if a mizzen staysail is used, it is set flying, like the beauty on Major Hahn's fine yacht, Nonchalant. (The next five columns are reserved for a debate on whether she is a ketch or a yawl, at our usual rates!)

The Grand Haven rig, especially as fully developed, differed from the ketch in having the foreboom come no farther aft than amidships, permitting a permanent mizzen stay, and in having a mizzen and mizzen topmast as lofty as the corresponding foremast. That it was as fast, from one end of the season to the other, as the full three-masted or two-masted schooner rig, I do not believe, though most sailors said it was; but it was cheaper to maintain and much easier to handle than the full schooner rig.

Sir,—Your articles from time to time re the preservation of the Lyman M. Davis, the last of that proud fleet of white wings that for a hundred years carried the commerce of our inland seas, has aroused the interest of various organizations as well as the sailing fraternity.

I, for one, who has sailed these lakes for over forty years, also protest. I can well recall the wonderful sight in Collingwood harbor when these grain laden vessels arrived with cargoes from various ports the graceful lines, the white sails and lofty raking spars, a sight that is gone for ever.

During the seventies there were on the Canadian and U. S. register upwards of 1400 sailing vessels, and of that grand fleet the only survivor is the Lyman M. Davis, and why not preserve her as a relic of the glorious old days of sail?

To those of us who have passed the meridian of life it is a glorious memory as we recall those sights. Many of the present-day sailors of the younger generations will hardly know what they looked like.

Many hears ago the writer recalls passing down the Straits of Mackinac during a fog, quite dense but not very high. I was up on the cross-trees above the fog on the lookout. We could hear the schooner's three blasts and from my position could see a three-master ahead under full sail and reported to the officers on the bridge her position. We passed quite close to her. It was the N.S. schooner Pensaukee, afterwards called the Jas. G. Blaine, and well I remember what a handsome craft she was with her white sails and white hull. Capt. Williams looked up at me and said, 'Bhoy, you'll never see a finer sight then that!'

I can remember the subject of the present controversy in her heyday in the early nineties around Green Bay, when she also was no mean sight to gaze upon, and considering the long years of service to her credit has stood the test of time very well.

The famous old tea clipper Cutty Sark, launched in Dumbarton in 1869, has been rescued and preserved by an English gentleman on account of her glorious history, and why not preserve this the last remaining link of schooner days? Judging from her appearance she could be reconditioned and used as a training ship by the naval cadets or sea scouts, or else turned into a museum where pictures of noted Great Lakes vessels and steamers could be shown and old anchors, windlasses and other obsolete articles could be displayed.

During the World's Fair at Chicago in 1893 the old New Bedford whaling ship, Progress, laid for months in Chicago River, and was a regular museum where people could see all the old material used in whale fishing. There was a small admission fee, and I believe it was a profitable exhibit.

Those of us who have experienced the awfulness of fire on board ship shudder at the very thought of fire. I can well recall that October night in 1891 when at 2 a.m. on a stormy night off Lexington when all hands were called to get the boats ready. A ship on fire. The whole sky ahead was a glare. The ship's speed was increased and as we drew near the steamer rolling with the sea, and as she rolled to windward such clouds of sparks were sent high in the air. It was a wild sight when we came close as safety would allow. She was enveloped in flames stem to stern. Spars began falling sending showers of sparks and finally the clouds of steam as the water went aboard.

We could see no signs of crew around in boats and finally the Oscar T. Townsend, loaded with 1,900 tons of coal, took the final roll in the lake and disappeared leaving dense clouds of hissing steam. We learned afterwards the crew were rescued by her consort.

A few years ago in below zero weather in early December many of us can call another scene that many of of us will not soon forget. It was the last trip of the season, the Kaministiquia River packed with heavy ice, a cold northwest gale blowing with snow, the S.S. Assinboia loading at No. 6 shed and almost loaded.

About 6.30 p.m. the alarm of fire was raised and in a few moments the whole freight shed was a seething mass of flames. On the upper floor of the shed was stored many cars of binder twine, sugar and naphtha soap, fine fuel. Black clouds of smoke enveloped the steamer, flames shooting out of the shed windows clear across decks. Everyone working like trojans to get the vessel away were handicapped by heavy ice, the propeller churned, ice creaking, and with assistance of a tug we pulled slowly away, but none too soon. The bridge and crew quarters were in flames and members of the crew were strangling from the fumes of naphtha soap, the gale carrying burning pieces of timber clear across the river.

Did the people of Fort William get a thrill from watching that terrible fire from a distance, knowing the lives of many sailors were in danger? I should say not. Not one of them would pay a nickel to watch such a sight and there were thousands of them there watching the fire.

Many of the sailing fraternity with whom the writer has spoken are quite indignant at the thought of burning, and as one old veteran said (not using parliamentary language), too bad some of these pyromaniacs weren't on board when she burned and perhaps they would get all the thrills and sight-seeing they wanted.

Are there not other means of entertaining the public along the water front on. a summer's night? Turn this old vessel into a museum whereby those who come after can learn how our Great Lakes commerce has been built up, first by the canoes of the Indians, then by sail and now by steam. The history of navigation on our inland seas from the very beginning is so full of interest. The wooden ships and iron men who manned them has meant much to this Canada of ours. May others protest and save the Lyman M. Davis from destruction.

THE JOHN MAGEE STRIKING HER FLY FOR A TUG in Toronto Bay thirty years ago. A lower lakes exemplar of the Grand Haven rig

In reflective mood at Midland. 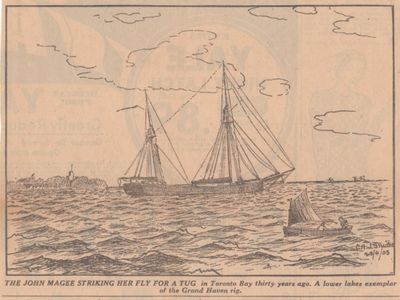