It might be impolitic to say how long ago long ago it was, but it wasn't this century, when a black two-masted schooner used to come into the old Queen's Wharf regularly with coal for P. Burns and Co. Mr. Burns then lived in the most westerly of the old Front street mansions with spacious grounds, just north of the wharf.

The schooner was black, with a red bottom, and a broad white strip at the coveringboard; and at the truck of her fore topmast she carried a gilded weathercock. Four pairs of merry young eyes used to watch the weathercock pecking at the wind, and four sets of tightly plaited pigtails used to toss in emulation of the long red-and-blue whiplash fly which decorated the truck of the vessel's other topmast, the main one.

The schooner was the W. T. Greenwood, of Cobourg; the brown pigtails and merry eyes belonged to the little daughters of the captain, and the captain was Alexander Ure, the hero of this tale.

He was father and mother to the merry little maidens who scampered about the decks and squealed with delight when the big bucket filled by the clashing shovels of the coalheavers soared up from the hatchway through the leisurely efforts of the old horse out on the dock, and was dumped with a crash into the waiting wharf cart. The cook of the Greenwood, a kind, motherly soul, looked after the little lassies, and they always had clean checked pinafores and cheeks as rosy as snow apples. But one time, when the Greenwood came in, three of the sailorettes were wearing black. The littlest one was not there. Wee Annie had died while the Greenwood was in the Welland Canal, going up to Lake Erie.

Sturdy still as a purple Scotch thistle Capt. Ure was eighty-seven last August. If ever a man proved to fate that he could "take it" it was this same Capt. Ure, who is now serenely enjoying the sunlight of late age at the home of one of his daughters, Mrs. H. G. Horton, 2 Elora avenue.

Alexander Ure was born at Limekilns, in Fifeshire, in Scotland. Before that event, dated Aug. 6th, 1846, his father had been drowned at sea. At the ripe age of nine Alexander became part of the ship's company of the sloop Chance, trading between the Limekilns and the Moray Firth. Alexander's duties were those of cook for the crew of three. As he himself modestly describes his then attainment, he knew "how to make and boil a ham." He also learned the art of climbing rapidly, because the captain, being in liquor, chased him up the rigging. His wages were his "keep," and the "keep" on Chance was not sybaritic. Alexander transferred his nine years and ten talents to the schooner Looney, which may be a Caledonian version of the classic Luna. Of her the only memory surviving is that her captain's name was Stewart and her mate's Murray. The suspicion arises, strengthened by the undisputed nationality of the new cook, that there was a somewhat Scottish flavor about this ship's personnel. It is confirmed in part by the fact that Alexander's wages were half a crown a month, which would be the equivalent of sixty cents, Britain being then on the gold standard.

Our hero next "went foreign" in the Fifeshire schooner Gufferts, with a cargo of Scotch iron for Rotterdam in Belgium. She came back to Leith with a cargo of chicory, for the furtherance of coffee-drinking in Edinboro' toon; and by this time Alexander had mustered the mysteries of plum duff and wind-puddings; possibly also dandyfunk and dog-body. This would indicate that the mariners of the Gufferts fared more sumptuously than those of his original sea-trade, the Chance. Not to be tempted by the lure of the fleshpots, Alexander was apprenticed to a ship carpenter in Limekilns, served his time, and went to sea again with carpenter's rating.

During the decade in which he was ploughing the ocean and planing stuns'l booms in deep-sea ships his mother came out to Canada and wedded again. Her second husband was Peter Young, of the colony of farmer-sailors settled around Dunbarton on Frenchman's Bay - then a busy little port for lumber, cordwood timber and barley trade. Alexander craved a quiet life ashore where one could hear the church bells ring on Sunday and go to service, instead of turnout out with the watch as eight-bells clanged. He came to Canada, looking for this life on a farm; but what he found was the old Highland Chief sadly in need of repairs in Frenchman's Bay.

The Highland Chief had been built in Port Credit before Alexander Ure was was born; 1841 was the date of her launching. She was a long narrow standing-keeler, 72 feet on deck, only 14 ft. 6 inches beam, and 5 feet deep in the hold. She, too, was painted black and red, steered with tiller and tackles, measured 52 tons register, and was crank, wet and fast, John Cuthbert, brother of the more famous Alex Cuthbert, who built the Atalanta and Countess of Dufferin and many other yachts, sailed the Highland Chief. The late Magistrate J. J. O'Connor used to tell of her coming to Oswego with the wind howling and driving sheets of rain as heavy as he sheets of spray the schooner herself was shooting. John Cuthbert asked young Bob Greenlaw, newly shipped, where he'd soon be than at sea that present moment.

"Well," drawled Bob, dodging a hogshead of Lake Ontario. With the Highland Chief was hurling into the belly of the mainsail, "darned if I wooden druther be Jim Peak's dog lying under the stove."

With such names between them, the Highland Chief, in need of an overhaul, appealed irresistibly to Alexander Ure, Scottish ship carpenter, and mariner inclined to farm. He took on the job of rebuilding her. Before long he owned her, or most of her. Nelson Garner, Wm. Gorman, and Daniel Marks all appeared on her register as one time owners; but of this much Capt. Ure is quite positive; his was the loss when the Highland Chief, beating back and forth in baffling winds at the old Eastern Channel, struck the boilers of the steamer Monarch, wrecked there in 1856.

John Cuthbert, it appears was sailing her on this occasion. She as loaded with stone, and went down like her cargo. The crew were just able to save themselves by jumping to the scow they were towing, and cutting the painter. The Highland Chief had breathed his or her last; she broke up before she could be floated. This blow, on the 19th of September, 1873, was the first of many which fate dealt Alexander Ure, but he has survived them all and come up smiling.

As you shall hear later.

The W. T. GREENWOOD, one of many schooners Capt. Ure sailed. 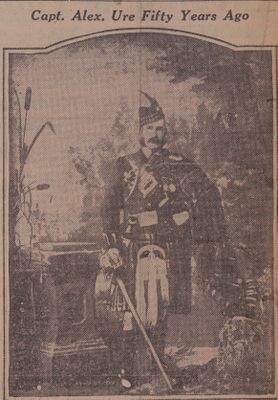