Being a Continuation of the Life and Adventures of Capt. Alexander Ure, Master Mariner, of Toronto, Now in His Eight-eight Year

MANY a hard day's toll had Capt.Alexander Ure, graduate ship's' carpenter, put in at rebuilding the Highland Chief at Frenchman's Bay after he came to Canada. She represented all his accumulated capital, and she was a total loss. When sailed by another man, she was eviscerated on the sunken boilers of the old steamer- Monarch off the Eastern Gap in 1873.

But, undaunted, he went into the gaunt stonehooker Rapid, which had been brought into Port Credit one morning by some poor devil for whom creditors around the Genesee had made life miserable. Said poor devil had piled all his household goods aboard her and sailed across the lake with his family, a refugee from the land of the free but home of the brave bill collectors. Old John Goldring took pity on his distress and bought the schooner from him. Capt. Ure took her over, and made her pay, and sold her to Port Credit men. He was fortunate in getting out of her before she went to the bottom of Port Credit harbor.

When by superhuman efforts, using two able-bodied stonehookers as pontoons, Tommy Blow and Bob Crosby succeeded in raising her from the river-bed, she was found too far gone for repairs. She long lay in Miller and Block's shipyard at Port Credit, an abandoned hulk, with clam shells in the mud of her binnacle. She became ultimate firewood in 1896.

This was twenty years after Capt. Ure had sold her. Her successor, in his ownership, was the little schooner John Wesley, of Port Hope, another old-timer, built in Oakville in 1838. She was burned in Whitby in 1897, but he had sold her likewise some time before. These first schooners which he owned were all small coasters, stonehookers and cordwood carriers.

Capt. Ure's first "real vessel" was a homely slant-stemmed schooner named the Isabella. Marine registers are accurate enough but often misleading, because they sometimes confuse two or more craft which have the same name. There was an Isabel or Isabella trading out of Whitby in 1855, and she appears to have borne as well the names of Alwilda, Dove, Caspian, and Lady Hilliard at sundry times and divers places, including Quebec. But of this Capt. Ure knows nought. He does recall that the Isabella had some soft frames in her when he bought her, but she had a stout bottom of rock-elm, four inches thick, and with this foundation and his own carpentering skill he made a good craft out of her. After putting a lot of work on her he got a charter to carry an experimental shipment of iron ore from Whitby down to the blast furnaces at Charlotte. This was probably in 1881.The ore had been mined somewhere back of Port Perry, and brought to Whitby by rail.

It blew hard from the northwest when the Isabella left Whitby, and Capt. Ure cautiously put into Oak Orchard, on the south shore, for shelter. Next day, wind and sea having run down, he ventured out, but after baffling about and making little headway all day—Charlotte was only twenty-seven miles distant—the nor'-wester again swooped down upon him at midnight.

The sea again ran mountains high making up quickly on top of the leftover of the preceding gale. The mainmast went out of the Isabella. He cleared away the wreck, and steered for Charlotte where the glare of the blast furnaces was now plainly visible, but then the foremast went over the side. She was within sight of safety. He gave her both anchors and prayed for the day.

By morning they had dragged down to within twenty-five feet of the little wooden piers which then gave entrance to the Genesee River, with the village of Charlotte clinging to the high west bank. Tossing up and down inside the piers he could see the tug Florence Yates.

"I'll give you two hundred dollars to tow us in, no cure, no pay!" hailed Capt. Ure from the cabin-top of his wallowing schooner.

With his crew - two men and a cook and the mate - he had pumped all night since anchoring, and the brakes were still clanking up and down, up and down, without getting a suck. Bright water gushed continuously.

The Yates blew her whistle, but that did net leave her enough steam to stem the in-rolling sea.

At two o'clock next afternoon they were still clanking. But the Isabella, straining in the rollers, with the iron ore dismembering her, was like her bone-weary crew, at the last gasp.

"Two hundred dollars for anyone who'll tow us in. No cure, no pay!"

The Yates tried again. This time she got out through the rollers. They had two turns of the towline around the paul-post when Capt. Ure shouted "Cast off! Cast off! She's gone!" and the Isabella went down under the weary pumpers' feet. They jumped to the cabin top, and from there to the tug, as the poor old schooner went under. Her bones were strewn all along the sandy shores of Summerville, and there may be iron ore yet there among the pebbles.

Undisheartened, Capt. Ure went into a second John Wesley, a scow of the same name as the little schooner with which he had built up his fortunes later.

She was a round bilged scow, nicknamed The Punchy because her model was that of a puncheon split endwise. Saltwater bred Capt. Ure despised scows as inland products, unworthy of a seaman's attention. But—

"Weel may the boatie row

That brings the bairns' bread."

Alex. Ure never hesitated at an opportunity of earning an honest living, and "The Punchy" presented it. After hard work in and on the Punchy he sold her and again realized his ambition of owning and sailing a real man-sized schooner.

His latest venture was the fine schooner Ariadne, 10,000 bushels capacity, built in Port Burwell, but bought by him in Oshawa. He had one close call in her, in 1882, when bound for Oswego in a westerly gale. All hands gave themselves up for lost, but he got her into Kingston, partially dismasted.

It was in the Ariadne - not the Greenwood -that his little daughter Annie met death, when the vessel was in the Welland Canal. Perhaps that was why he was willing to part with the schooner. He sold her to Sutherland McKay, of Toronto, who lost her in 1886.

A successor to the Ariadne, in Capt. Ure's ownership, was the fore-and-aft schooner Undine—the fastest vessel by the wind, so they say, Lake Ontario ever saw. She once made the round trip from Hamilton to Oswego and back in forty-eight hours. The boys who shipped at $25 for the trip had money to burn, and those who signed on at $2.50 a day—"big money" for the fall of the year—had $5.

The Undine opened up on him one night in 1891 coming up the lake in a wild blow and he had to run her ashore at the Devil's Nose to save the crew. All hands reached shore in the yawl boat. But the clipper of the lake was a total loss. In view of her speed records, her dimensions are worth noting: 107.8 feet on deck, 22.6 feet beam, 11.5 feet deep in the hold; sharp, narrow, deep, fast and a good carrier. She registered 221 tons and could walk off with a four hundred ton load. Capt. Johnston, of Hamilton, long sailed her. She was built in the Ambitious City in 1868.

But Alexander Ure, unconquered and unconquerable, did not yield to misfortune. He had moved to Toronto in 1883. He was impressed by the possibilities of the big city. He found a friendly Presbyterian atmosphere in Chalmers Church at Dundas and Dovercourt road, where he became a member. For forty years he was an elder in this congregation.

In the winters, when his vessels were laid up, he found opportunities ashore for his carpenter's skill. He became one of the builders of our growing city. Six houses in Rolyat street stand today as monuments of his industry when the navigation was closed; and many other houses, singly or in pairs, in Parkdale. He had learned, too, the wisdom of not having all eggs in one basket. He had shares at various times, in the schooners W. T. Greenwood, Speedwell, W. Y. Emery, Antelope, Augusta, Stuart H. Dunn and Reuben Doud and was in partnership along with Capt. John Williams, the Ewarts of Cobourg and the Conger Coal Company.

The loss of the Undine, while severe, did not paralyze him. He gallantly accepted, in the words of Job, evil at the hands of the Lord as well as good and did not complain. 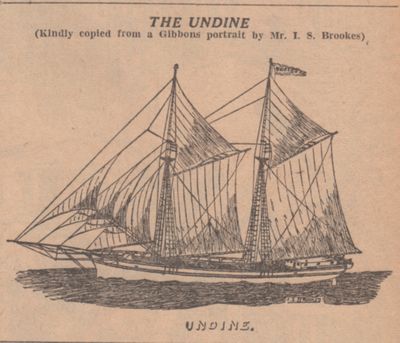