It looks as though the wreck discovered at Birch Island, Lake Huron, an outlier of the Les Cheneaux group, cannot be the long lost barque Griffon.

The Griffon, as we have been often reminded, was that pioneer sailing craft of the Upper Lakes which broke the heart of the great explorer La Salle 225 years ago by disappearing without trace. La Salle named the fort he built at the time Crevecoeur -"Heartbreak."

Early this year considerable enthusiasm was developed—not without an eye on the tourist traffic of this coming summer—for a wreck which had been found 12 feet under the ice on the northwest corner of this Birch Island which we have mentioned.

It was argued that the Griffon, which was last seen leaving Green Bay, on Lake Michigan, in 1679, would have to pass through the Straits of Mackinaw on the homeward voyage with that cargo of furs which was to satisfy La Salle's creditors. That voyage was never completed. Birch Island lies 11 miles northeast from Mackinac Island on the Straits of Mackinaw.

A wreck 60 miles east of Birch Island, on the western end of Manitoulin Island, was believed by the late H. G. Tucker of Owen Sound to be that of the Griffon, and he led an expedition under the auspices of the Ontario Government, to establish its identity. Mr. Tucker was convinced; others were less so.

The Telegram made a close examination in 1931, and was inclined to doubt, from the size of the timbers, that it could be the wreck of so small a vessel as La Salle's little ship. There were, however, certain circumstances, such as the quality of the iron work and the character of the wood, and the articles found, or reported to have been found, in the vicinity of the wreck, which made Mr. Tucker's theory plausible.

The Manitoulin identification was, and still is, open to question, so the worthy Chamber of Commerce of Hessel, Michigan, and the Mackinac Island Park Commission, showed an interest in this other wreck, nearer home, and preliminary press notices appeared to the effect that an examination through the ice showed dimensions suitable for the Griffon, and antique construction.

Luke, the pilot or sailing master of the Griffon, has been suspected for three centuries of making away with her. That suspicion may do injustice to the Scandinavian giant whom La Salle distrusted, but a hole discovered in the bottom of this Birch Island wreck was cited as confirmation of the possibility of her being the scuttled Griffon.

Dr. Franklin Cook, of Evanston, Ill., has organized a Griffon research society. Through his courtesy the compiler of "Schooner Days" -who investigated the Manitoulin Island wreck for The Telegram, and for the Ontario Government, gratis — has received a copy of the report of the diver who has been examining the Birch Island wreck, with diagrams. Here it is:—

2. "The stern of this wreck looks to me as though it could be the Griffon's or else an early boat with a cabin out the rail although I have never heard of a lake boat being built that way."

3. "The wreck is lying on her port side and the starboard side has broken away and is lying in the opposite direction. Nearly all the starboard rail is burned off and at one place the fire has burned down about four or five feet, below where the deck was. This side has broken away from the keel for a considerable distance back from the bow. All the port rail is broken off at the water ways. I couldn't find any indications of the fire having been on this side."

4. "The part of the starboard rail that is left has some uprights projecting through it. These are three by six inches and are broken off about two feet up from the rail, which is about three feet up from where the deck had been."

5. "The stern post is about 15 inches square at the top and is broken off about three feet up from the transom."

6. "We found the stem piece back by the stern (loose) and pulled it out. It's nothing like the Griffon's if the pictures are right. It is a straight piece except where it starts to turn into the forefoot. On the lower end are two bobstay plates. At the top are two trenails that I can't figure out."

7. "The wreck had a centreboard. All that is left of it are the hog rods which have nuts and threads at their ends."

8. "On the outside of the hull If found small bits of white paint."

9. "All the spikes are made by hand though well done. Some of the clinch rings are very crude and, quite thin compared with the ones used now."

This report seems to blow the Griffon identification sky-high.

First, the centreboard. There were no centreboards in LaSalle's time, nor for a hundred years afterwards.

Second, the size. Giving the Griffon the maximum size ever attributed to her, 60 tons, once mentioned by Father Hennepin—he says 45 tons elsewhere—she could not have been longer than 50 feet on the keel. This wreck is three times too long for the Griffon.

Third, the white paint. What paint will last under water sufficiently well to show traces of itself at the end of 255 years' submersion?

Fourth, the bobstay plates. Seventeenth century vessels rove their bobstays, if any, through holes in the stem; I have never seen any examples of bobstay plates as early as the Griffon. One guess at the two treenails in the upper end of the stem is that they are part of the fastenings of either trailboards or a figurehead, since washed away.

At this distance the Birch Island wreck looks to be that of a 19th century schooner of somewhat less than Welland Canal size. That was 700 tons carrying capacity. She does not seem to have been built earlier than 1850. She may have been scuttled in an attempt to save her, either from destruction by fire or from pounding to pieces after stranding. Sometimes, if a schooner struck the shore, it was better to scuttle her and let her fill with water, so as to lie quietly until she could be salvaged. The fire which destroyed part of this wreck may have occurred after she sank, for lying in 12 feet of water her upper works might be well above the water on one side.

The upright projections through the rail, which made the diver think she might be of antique build, are possibly the remains of stanchions for raised quarter bulwarks. Some of the lake schooners had what was called a poop cabin, with the roof of it running flush to the rail and forming a deck above the level of the main deck. This had to be protected by quarter rails and bulwarks.

Building of the Griffon at Cayuga Creek, Niagara River 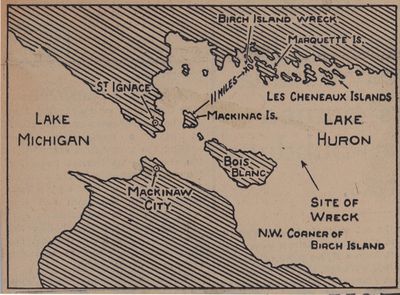 Building of the Griffon
Groups of Related Records