STILL another tragedy Warden McDonald unfolded in his vibrant Highland tones at the recent Mariners' Service at Cherry Valley; the only one which occurred in his twelve years' tenure of office as keeper of the light on Salmon Point, Prince Edward County, or Wicked Point as it is well named.

It would be in the late fall of 1902, when all the vessels were trying to make the most of the season after the coal strike, which had tied up the trade when the fuel should have been got in by water.

"Four vessels came across from the south shore ports, laden deep with coal, late in December. The John R. Noyes had been a schooner, but she had been cut down to a barge, and she was towed by the steamer John C. Hall. The steamer was commanded by the father of the captain of the Noyes. Both vessels were owned by Captain Timothy Donavan, who commanded the Hall, and the steamer's crew was very much a family affair. It consisted of Captain Timothy Donavan, First Mate Jerome Donavan, First Engineer John Donavan, Second Engineer James Donavan, all relatives; Thos. Cochrane and Daniel Bigelow, wheelmen; John Dixon, fireman, all of Oswego; and Thomas Ryler, fireman, and Mrs. Brown, cook, both of Buffalo.

"The Hall and her tow were valued at $35,000, and had no insurance. They were in company with the Abbe L. Andrews, of Toledo, an old-time Schooner which still retained her topmasts, although her mastheads were sprung and fished, and she was at this time towed by the steam barge Resolute of Deseronto. The vessels were loaded with soft slack for that port.

"On the morning of the 14th of December I saw those four ships close in with the lighthouse on Point Peter. It was bitter cold, and the lake was full of vapor, rising from the chilled water into the still colder air. They had all anchored close to the lighthouse, to wait for better visibility. We could hear them signaling by the donkey engine whistles, and in the afternoon, with the vapor clearing, they hove up and got under weigh.

"The wind was light when they started, but by the time they had reached the other corner of Prince Edward, and tried to turn north for the run up the bay to Deseronto, the wind was raving from the southeast, bringing heavy snow. They dared not round the corner with the peril of the False Ducks and other islands confronting them in the snow, so they turned tail and came back up the lake.

"I knew it would be a bad night for them, and lit the light early.

The wind raved so that if it had not been for the railing around the lantern I would have been blown off into the lake. I was hurled against the railing again and again as I struggled to clear the lenses of the blinding snow; but I kept the glass clear and the light burning.

"Through the midnight gusts those in the John R. Noyes heard four blasts on the whistle of the steamer Hall, laboring ahead of them at the end of the invisible towline. Four blasts! Trouble! Distress! Cast off!

"That is what the signal meant, and what must it have cost the young captain of the Noyes to obey it! His father in distress, a few hundred fathoms ahead, in the snow-filled night, urgently demanding freedom to fight his battle unencumbered by his tow; and the son helpless to aid him, unable, indeed, to do anything but run before the wind, in a vessel practically unmanageable once the towline was severed.

"But without a moment's hesitation he cast off. All night the Noyes labored and rolled and plunged, driving before the easterly gale. When morning broke she was still afloat, though making water, and far up the lake, with no sign of her towing steamer nor of her consorts. How long would she last? How long could she be kept off the shore?

"They were abreast of Rochester. The Charlotte lifesavers sighted her reeling spars, and, at great peril of their lives, came out in their big power lifeboat and picked off the crew, expecting the schooner to sink any moment.

"But the John R. Noyes, left to her own devices, made a gallant fight for life. The wind shifted. She shifted her course with it. Before tugs could come out after her she was rolling broadside down the lake before a new gale from the west. As though human, she steered herself back to where she started from; but, not being human, or more than human, she could not fight clear of the shoals and pitfalls of wicked old Salmon Point. She drove in on the reefs and was beaten into a thousand staves.

"What of the steamer Hall? No man knows. No man will ever know. Perhaps she burst a steam-pipe. She foundered in that midnight blackness carrying down all hands. Pieces of her were washed ashore at Stony Point, 30 miles from Oswego on Dec. 20th.

"And what of the other two vessels?

"The Resolute, the same barge that five years later went down at her anchors off the Garrison at Toronto, in a westerly gale, at the end of November, with the famous "Cap." Sullivan on board—she had a dreadful battle with this December storm. Part of her wheelhouse, which stood up forward in her like the roof of the Royal York, was battered in and washed away by the mountainous seas, and she was loaded down with ice. She, too, had to cast her tow adrift. With the shift in the wind she limped back to Deseronto, steered by her engines.

The Abbie L. Andrews, old-time sailing vessel, came through best of the four. She had a complete rig, and drove up the lake under storm sail until the land closed in on her on both sides, Burlington Beach stretched before her, threatening destruction, but the piers were open, and through them she staggered, missing radial bridge and railway bridge and both pier ends, by the mercy of God, and finding shelter and solace in the smooth waters of Hamilton harbor.

The Abbie L. Andrews crept about for years after this terrible punishment "on her own hook." Her original topmasts were taken out of her and replaced by lighter ones; her sprung mastheads were held together somehow; the old mizzenmast had to be taken out entirely, but it was replaced by a hollow steel spar taken out of some steamer. It had steel blocks on it, aloft, which could not be removed, and which were not needed for gafftopsail gear, for the Abbie L. Andrews was famous for never using a mizzen gafftopsail; and so, in her last years, she went rolling up and down the lake with these empty steel blocks banging like bell-hammers, clanging a melancholy proclamation that she was on her last legs. She had a little raffee forward, and traded out of Kingston under this makeshift rig until 1917, when she sank in the harbor.

The tradition accounting for the absence of a mizzen gafftopsail In the Abbie L. Andrews was to the effect that when she was first fitted out the eldest son of the captain and owner was killed by a fall from the mizzen crosstrees while bending the new gafftopsail, and his father would never allow this sail to be set.

The ABBIE L. ANDREWS in her reduced rig. 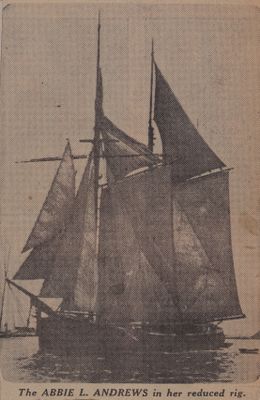