NOT long ago, talking of the loss of the Jessie Breck when bound for Garden Island, something was promised about the barque of that name—not the Jessie Breck's, the island's—launched at that place; a deep-sea vessel built on Lake Ontario of local timber, which successfully battled the North and South Atlantic, the Indian Ocean, the Caribbean and the North Sea for thirty years.

Garden Island, to repeat, is just across the harbor from Kingston city; about twice as far from Kingston as Toronto Island used to be from Toronto, before our waterfront development brought our island nearer.

Garden Island was a grand centre for the square-timber trade in the old days, acres and acres of rafts being made up there annually and sent down the St. Lawrence to Quebec. It had also a great shipyard, and for many years there was always a new ship of some sort on the island ways.

D. D. Calvin, M. P. P. (Frontenac), one of the lumber kings, bought the island and formed on it "a veritable hive of industry, a peaceful abode where distinctions between rich and poor were unknown, and where there was as near an approach to equality as can be looked for amid the complex civilization of the nineteenth century."

Frederick William Wallace pays this tribute in his "In the Wake of the Wind-Ships." Kingston city was also the site of shipyards in which vessels were built for salt water, of which, perhaps, we shall have stories later.

The Calvin firm built many lake vessels for their own timber trade and the general market, but the barque Garden Island came into being as the result of just such a spell of hard times in the seventies as Canada has been experiencing since 1929.

"There were two reasons for the decision to build an ocean-going vessel," Mr. D. D. Calvin, of Toronto, grandson of the "King of Garden Island" relates, "first, to keep the shipyard at Garden Island in being; second, to try something fresh in the stagnation of lake freighting. The schooners - particularly, perhaps, the timber schooners - were losing money, for the timber coves of Quebec, at the export end of the trade, were glutted with unsaleable timber." Mr. Calvin has compiled valuable data regarding the picturesque old trade of timber rafting, and much of what follows, about the Garden Island is from an excellent article by him in a recent number of the Queen's Quarterly. Mr. Calvin has in his house in Toronto the model of the Garden Island here shown, also her sail-plan from which the cut was made.

The Calvin yards had a good foreman in Henry Roney, graduate of the old Kingston admiralty dockyard at Point Frederick, where the eighteen-twelvers were built. That, though, was long before his time. The last of them was laid up before he was launched. He was born at Lachine in Quebec, and worked at the dockyard in its declining days.

In 1876 Roney was entrusted both with the designing and the building of the new barque. And a good job he made of both. His commission was to build as large a vessel as could be conveniently got to sea through the St. Lawrence canals. He laid down a ship 168 feet over all, 36 feet 3 inches beam, and 21 feet 4 inches, moulded depth; a short ship for salt water, where her other dimensions might have been accompanied by 240 feet of length.

He launched her from the island ways on May 6th, 1877. He had remembered the sills and gates of the canal locks. He cut things so fine that he did not put in the iron knees which were to tie her deckbeams to the frames until after he got her to Montreal. But his calculations were sound and so much on the safe side that the ship was able to float herself, with the iron knees on deck and her lower masts in their steps, down the 9-foot limits of the locks. The knees were bolted into place in Montreal, and she was sparred and rigged in Quebec, at Bowen's Cove, by Calvin's Garden Island riggers.

Though short in length she looked and was a tall ship. Her mainmast, spiring 128 feet above deck, was, as Mr. Calvin points out, six or seven per cent higher, proportionately, than the mainmast of the Canadian W. D. Lawrence, the largest wooden ship afloat in 1874. It was about as high as the mainmast of the Bluenose.

The Garden Island was rigged as a true barque by Joseph Dix, the Garden Island sailmaker, who has descendants living in Toronto. A true barque has three masts at least, and all square sails on both foremast and mainmast; a Great Lakes "barque" was usually a barquentine or topsail schooner, with some square sails forward; sometimes only a square fore-topsail.

Dix gave the Garden Island five square sails on the foremast and five on the main, from courses to royals. On the mizzen she had the proper barque's sails, a spanker and gafftopsail.

She had, of course, jibs forward and staysails between the spars. Her mainyard was 76 feet long; not as long as the squaresail yard of some upper-lakers, like the J. I.Case.

Her linen canvas and wire rigging had come from England, but everything else was the proud product of the island whose name she bore. She was built of oak and elm, sides and bottom, with pine decks, and was fastened with iron where the salt water could not corrode it, and yellow metal bolts in the butts and oak and locust treenails elsewhere. She had a short clipper bow, a nice round stern, long floor, not too flat, and a good clean run. She was in every way a credit to her designer and builder. She registered 870 tons, and could carry between 1,100 and 1,200 deadweight. I do not know how high she classed at Lloyds, but she was so good she sailed her first seven years without insurance, and all the time her builders and first owners kept her she cost them $60 only for damage, and that was for a jib-boom she knocked out of a Portuguese ship in harbor.

Her first cargo was some of the Calvin firm's own timber, from Quebec for Greenock, and she made the run in 27 days. Capt. Ed. Zealand, of Hamilton, sailed her across, and in the crew were George Dix, son of the sailmaker, and Tom Brian, afterwards shipyard foreman at Garden Island. His son, William Brian, was captain of the steamer Kamloops, lost with all hands in Lake Superior a few years ago. At Greenock she was docked and copper-sheathed. She came back with a load of coal for the Windsor Hotel in Montreal, and went out again with wheat. This time she made the passage from Bic on the St.Lawrence to Grayesend on the Thames in 19 days, a splendid record, at her best.

Then around the world she jogged wheat to Belgium, glassmakers' sand to South Wales, coal to Cuba, and sugar back to Canada; over to Scotland again for coal, and out with it to Ceylon; on to Rangoon in Burma for rice, and so back to Glasgow. Capt. Zealand sailed her thus for the Calvins for seven years. In 1884 they sold her, on the drydock in Glasgow, to three Prinz brothers, Norwegian shipowners. They renamed her the Trio, and continued to use her in general carrying. She kept going until 1907. She was caught in a spring gale, on the coast of Durham, near Hartlepool, and for two days fought a battle with the heavy northeaster, till a headstay parted and her foremast fell. She drove ashore, drowning most of her crew, while her coal cargo spouted up from her burst hatches.

A salt-water sailor who had come to Canada a few year later, shipped in the steam barge Simla, the last wooden lake steamer built on the Calvin ways. One day in the island sail loft, he saw George Dix's drawing of the old Garden Island, launched from the yard thirty years before. He was told she had become the Trio, and they had lost track of her.

"Why," said he, "I saw the Trio wrecked at Hartelpool."

Model of the "Garden Island" here in Toronto

The model which Henry Roney made for the Garden Island, and from which he laid down the moulds in the island building loft which gave the real ship her shape is in the possession of Mr. D. D. Calvin, 12 Bryce avenue, a grandson of the first owner of the Garden Island. Unlike many builder's models, which were severely practical, it is a highly decorative souvenir of a great enterprise. That may be in part due to Mr. Calvin's taste in mounting and preserving it. He is an architect of distinction. It is quite large, being on the scale of 3/8 of an inch to the foot, it is over five feet long and a foot deep, but not very wide, because like all builder's models, it shows only one-half the vessel. By using half models they were sure to get both sides even. It is built in alternate layers, called lifts, of white pine and black walnut, like slices of layer cake.

The "GARDEN ISLAND" in profile, drawn from her original sail and spar plan made by Joseph Dix, The original is in Mr. D. D. Calvin's possession. 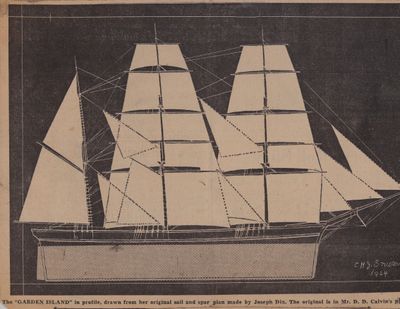 Model of the "Garden Island"
Groups of Related Records