THE Calvin barque, Garden Island, was neither the first nor the last square-rigger built on Lake Ontario for service on the Seven Seas.

E. W. Berry built several at Kingston. His last was the Quorn, named after the famous English hunt, and launched in 1879 [sic: October 1865], two years after the Garden Island. Berry had already turned out hulls which had to be sandpapered to get them through the canal locks, and to make sure of not having to saw the Quorn in two to get her down the St. Lawrence he gave her a bow that was almost plumb, like a lake schooner's. Close to the stem was set the figurehead, a lady in hunting costume flourishing a whip.

The Quorn measured 184 feet 8 inches from stemhead to sternpost, and was 37 feet 6 inches beam and 24 feet 4 inches deep in the hold; the deepest ship Berry attempted. She was launched at Kingston and towed to Quebec, where she was registered. Here she was rigged as a barque. The Garden Island had already set the precedent for this style, which was more economical in crew and canvas than that of the full-rigged ship. It saved four or five square sails on the mizzenmast, with all their yards, gear, and handling. The Quorn was a "spiked ship," her planks being fastened to her timbers with spikes, as was done with nearly all the lake schooners, instead of driving through-bolts and dumps, as was the general practice for salt water.

Capt. Joseph Bernier of Quebec, Canada's Grand Old Man of the Arctic, sailed the Quorn. He made one passage from New Orleans to Liverpool in her in 32 days, and another from Quebec to Glasgow in 22 days. In December 1880, he left Greenock for New Orleans, and encountered heavy weather on the Irish coast. Her spiked planking opened up and she commenced to founder. He squared away for Lough Foyle and piled her up on the beach. That was the end of the Quorn, in her second year. "But," says Frederick William Wallace's Wake of the Wind-Ships, "the owners and court of inquiry absolved him from all blame, and complimented him upon the action he took in trying to save the vessel and her company."

E. W. Berry had built the ship Sparkenhoe at Kingston in 1865. She was 184 feet long, 38 feet beam, and 23 feet 7 inches depth of hold, and registered 1,223 tons: a much larger vessel than the Garden Island. She was towed down to Quebec and rigged there as a three-masted ship, and registered there — which practice may account for the general lack of knowledge of lake shipbuilding for salt water. The Sparkenhoe was owned in London, England, In 1872, and had always been considered an English ship.

The same year he built her Berry built the full-rigged ship Kenilworth at Kingston—or rather built her hull there and towed it to Quebec for rigging. The Kenilworth was only a little smaller in her general dimensions than the Sparkenhoe. She was 175 feet long, 33 feet beam and 20 feet 3 inches deep in the hold, but the diminutions made a startling difference when the registered tonnage was computed. She registered 860 tons, almost one-third less than her sister of the year.

The Quorn registered three tons less than the Sparkenhoe, although eight inches longer and almost a foot deeper in the hold. She was six inches narrower.

Before these earlier square riggers of Berry's Kingston had been building lake vessels that went overseas; not only lake schooners and lake "barques" which tackled the task, but full-rigged barques intended for salt-water service, and built for purchase abroad.

One of these was the barque Cataraqui, of 842 tons register, 146 feet long, 30 feet beam and 22 feet depth of hold. She was built at Kingston by J. Counter in 1854, at the time of the Crimean War. A spirited old woodcut from an Engish magazine of the time shows her being towed down the Galops Rapids, instead of descending by the canals, on her maiden voyage. Same woodcut garnishes her with the white ensign of the Royal Navy at the mizzen peak and the Union Jack at the mizzen truck. This would indicate they were less fussy about such things in the spacious days of Queen Victoria— or else the navy had "taken over" for the passage. Nowadays such a display of bunting is punishable with a fine of £500. The penalty was clamped on once, years ago, right in Toronto harbor, by a naval commander scandalized by improper use of the flag by an innocently ignorant merchant skipper.

This barque Cataraqui could hardly have been the schooner Cataraqui, of 550 tons, which Capt. Robt. Gaskin took from Kingston to the Old Country in the same year, but what became of either of these Cataraquis I do not know. There was apparently another Cataraqui, built at Quebec by Wm. Lampson in 1840, but she was a full-rigged ship, and was wrecked in 1845 on King's Island, Australia. To further complicate the record, two more schooners called Cataraqui were known on Lake Ontario, one built at Cantin's yard in Montreal in 1857, and owned by W. B. Whitby of Kingston in 1864, and another, seemingly of lesser tonnage, which is reported in the old books of the Port Whitby Harbor Company as making two round trips with the Dundonald and the Queen of the Bay from Whitby to Oswego in the last ten days of April, 1861. This Cataraqui carried 10,142 bushels of wheat which would indicate about 400 tons burden.

The Crimean War seemed to open Canada to the sea. It was at the time of the barque Cataraqui's venture, or rather, in the next year, 1855, that the ship City of Toronto was built by Jacques and Hay at the foot of Lorne street, opposite the present Royal York site, and sent to Quebec for sparring. She had a short career on the ocean but made several fast and prosperous transatlantic voyages.

That same year, too, the barque Reindeer was built up at Coldwater and floated to the Georgian Bay. It is understood that she was completely sparred and rigged here on the lakes. She went to England with a cargo of black walnut.

The Chicago Democrat of Aug. 1st, 1855, said: "From Georgian Bay to London.—A fine new barque for ocean navigation, the Reindeer, has arrived at Toronto. She was built by Messrs. Hayes at Coldwater, a few miles from Georgian Bay, and came down the lakes via the Welland Canal. She measures 474 tons and will class A1 at Lloyds for seven years. The following are her dimensions: Length on deck, 138 feet; length of keel, 133; beam, 26 ft. 5 in.; depth of hold, 12 ft. 10 in. amidships, 13 feet 9 in. forward, 13 ft. 2 in. aft. She is on her way to London, England, where she will be offered for sale. She has on board two-thirds of her cargo, consisting of a lot of walnut logs, and staves, shipped by Mr. Pierson, of Chatham, and intended for the English market."

How many even of today's residents of Coldwater know that its little river was once the building place of vessels for ocean navigation? The barque Reindeer was not the only vessel launched there. In the following year, Coldwater produced the schooner Sardinia, of 202 tons register, built by Wm. Pigeon for George Laidlaw, of Toronto. The builder, of the Reindeer was given by a Collingwood paper in July, 1854, apparently when the barque was begun, as "named Lamorse. He also built the James Coleman, Omar Pacha, Paragon and other vessels." These vessels were built at Dundas, Oshawa and other points, as their owners required, by a travelling shipwright whose name appears in marine registers as Lummaree, or Lamaree. Possibly Lamorse is a misprint.

Capt. Jas. McCannel, of Port McNicoll, who pushes nautical research as energetically as he crowds the C.P.R. steamer Assinoboia between Port McNicoll and Fort William, has unearthed the Reindeer's official record from the General Register and Record Office of Shipping and Seamen, London. This gives:

All of which shows how misleading official information can be. The Reindeer disappeared from the Canadian register and reappeared on the British with her place of building wrongly described and her dimensions less clearly indicated than in the newspaper clipping.

Lake vessels had begun to voyage overseas in the decade before the Cataraqui, City of Toronto, etc., and by 1860 those which had successfully "gone across" were numbered by the score. Some of these ran the rapids of the St. Lawrence between Prescott and Montreal. It is possible that some of the hulls of deep-sea ships which were rigged vat Quebec after being built on Lake Ontario reached salt water in the same way, floating high without their spars and ballast and guided down the boiling current by a powerful timber tug, in the same way as the Cataraqui.

THE CATARAQUI, full-rigged barque built at Kingston, Ont., running the Galops to the sea. - From an old print reproduced in Wallace's "Record of Canadian Shipping." 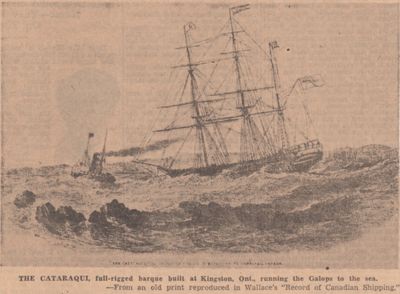